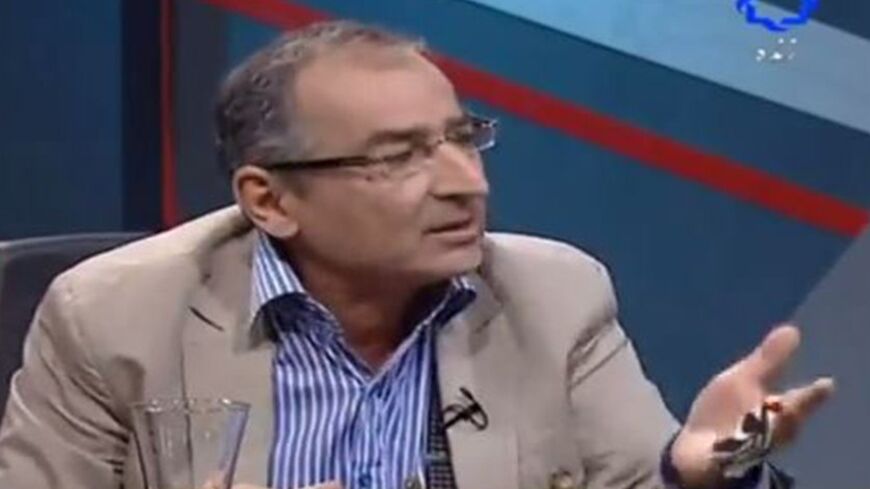 Sadegh Zibakalam is pictured in this still from a televised debate in 2013. - Youtube/Mahdi Yari
Arash Karami
@@thekarami
May 19, 2014

During a speech at Islamic Azad University in Mashhad, Tehran University professor Sadegh Zibakalam criticized the rhetoric of Iranian officials on Israel.

“Iran has explicitly stated many times that it wants to destroy Israel,” Zibakalam said. “None of the other countries that have a nuclear program have stated that they want to destroy a country.” According to the Iranian Students’ News Agency, the issue of Israel was raised as Zibakalam addressed the pressure and sanctions Iran has faced over its nuclear program.

“I don’t know who entrusted Iran with destroying Israel,” said Zibakalm, asking rhetorically, “Has the United Nations given this mission to Iran?”

An outspoken domestic analyst often tapped by foreign media to discuss Iran, Zibakalam was invited to the university to discuss President Hassan Rouhani’s victory, the performance of conservatives and other current affairs. This is not the first time he has stated that international opposition to Iran’s nuclear program is directly related to its rhetoric on Israel.

Zibakalam made similar statements during a June 2013 debate on the online Arman news program with hard-line parliament member Mehdi Koochakzadeh. In the heated exchange, defending the country’s nuclear policies under former President Mahmoud Ahmadinead, Koochakzadeh quoted former Supreme Leader Ayatollah Ruhollah Khomeini, who had said that in choosing between “protecting our honor or quenching our hunger, we prefer to protect our honor” while discussing the Iran-Iraq war.

Zibakalam asked Koochakzadeh why, then, Iran has this issue when no one else does. Koochazadeh said that no other country has the mentality of Imam Hussein, the third Shiite Imam was murdered in battle for refusing to submit to the unjust rule of the Umayyad Caliph Yazid. Zibakalam interrupted and said, “No other country has said that they want to destroy Israel.” Koochakzadeh said that people like Zibakalam are not committed to anything and would be eventually asked to compromise on everything.

After the debate was finished, the camera continued to roll, apparently without the two being aware. Koochakzadeh continued to ask how Zibakalam could question not fighting Israel. Zibakalam defended his position again, saying that he is not committed to Israel’s destruction and that Israel is a member of the UN. After some more words were exchanged, Zibakalam stood up, pointed his finger and said, “If your hands were not in [Syrian President] Bashar al-Assad’s hands I would believe you that you're free.” It is unclear how the debate devolved to that point, but it was an interesting perspective, given the very limited discussion of Syria in Iranian media.

During his speech in Mashhad, Zibaklam also said that conservatives in the country, particularly those against negotiating with the West, believe the reason for the international pressure against Iran is because “the West does not want Iran to have technical and economic” growth. Zibakalam called this “an illusion.” He also added that Iran is “doing in Natanz and Fordow what British scientists have already done many years ago,” so there should be no fear of Iran's technological advancement. It should be noted that one reason for Iran’s insistence on maintaining its nuclear program is its independence, as Western countries have at times reneged on offers of nuclear technology.

He also criticized the fact that during the eight years of Ahmadinejad’s presidency, “The smallest criticism of the conservatives' nuclear policy was not allowed.” He added, “There was no right to print an article on the nuclear program” under Ahmadineajd but today, under Rouhani, conservatives “easily criticize our nuclear policy and write articles, and recently held a conference” against it.

Zibakalam can be most accurately called a centrist figure who has supported negotiations with the West. He is politically aligned with Ayatollah Akbar Hashemi Rafsanjani and wants to decrease tensions with the West and neighboring countries. Since Rouhani’s election, he has become more outspoken and vocal.