What we've learned about how Egypt's leading presidential candidate may run the country. 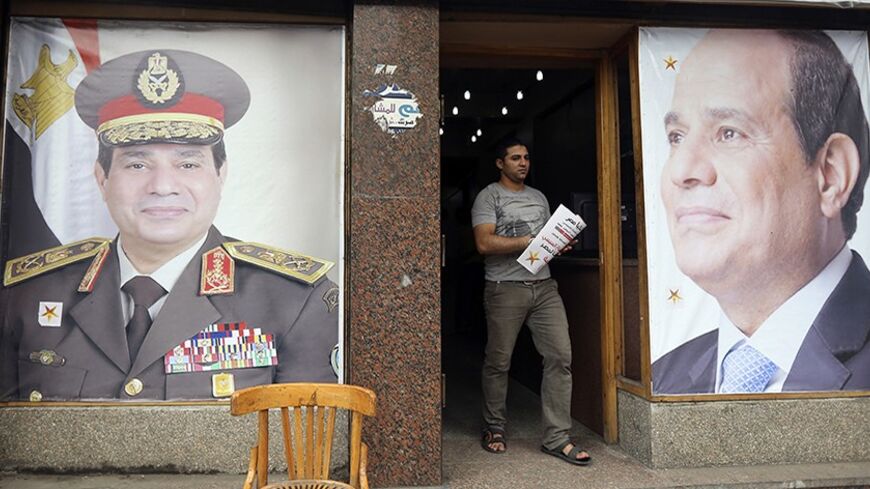 A volunteer leaves the headquarters of former Egyptian army chief Abdel Fattah al-Sisi near his poster in El Gamaliya district, in the old Islamic area of Cairo, May 9, 2014.

In his first televised interview as a presidential candidate, former military leader Abdel Fattah al-Sisi vowed that the Muslim Brotherhood would not exist under his presidency and delivered a glimpse of how he envisioned his tenure. The reactions were mixed: His supporters cheered for him as a statesman with a firm hand, which, in their view, the country needs to restore law, order and security; his opponents saw in his talk chilling evidence of an oppressive style of someone who has spent all his adult life giving orders and expecting them to be obeyed, no matter what.

The interview lasted for five hours and was split into two episodes, broadcast May 5-6. The interview was recorded several days before, meaning the content was edited. Both hosts, Ibrahim Eissa and Lamees al-Hadidi, and the two channels they represent, are strong supporters of Sisi.

Sisi cited the grave dangers facing the country and the millions of Egyptians who could suffer if the state collapses as the main reasons behind his presidential run, contrary to an earlier announcement that he would not run. In the first part of the interview, Sisi showed a great sense of urgency in current and future challenges facing Egypt, as well as determination to overcome these difficulties.

Sisi repeatedly implied the obvious — that many Egyptians wanted him to run, but he is running on his own terms. “I do not owe … deals to anyone,” he kept repeating. He made it clear that if the country is to be saved, things must be done his way. Yet, the new constitution limits presidential authorities when it comes to domestic policy, which is mostly handled by the parliament-approved prime minister.

Sisi said that the monumental problems facing the country mean that Egyptians will have to work hard to rescue the country. “I will not sleep, but neither will you! It is unacceptable to pass more debt to our younger generations,” he said.

Sisi made it clear that he intends to change many aspects of the state’s administration and tools of soft power to confront the problem of extremism nurtured by the Muslim Brotherhood and other Islamist groups. Such groups were previously tolerated by the state during Hosni Mubarak’s presidency and were initially encouraged by Anwar Sadat in the early 1970s. Sadat was assassinated in 1981 by Islamist militants during a military parade commemorating Egypt's October 6 victory.

As his tools for change, Sisi said he will rely on the goodwill of Egyptians who “summoned” him for the challenge, despite his initial unwillingness. When asked how he will face the problem of people impatiently wanting quick results, Sisi said, “When they see hope and trust their leaders, Egyptians can be the most patient people.” Sisi also hinted that he will get more financial backing from Saudi Arabia and the United Arab Emirates, and he praised King Abdullah as the chief or [respected] elder of the Arabs, as well as Emirati rulers.

Sisi vowed not to allow the Muslim Brotherhood to exist or regroup during his tenure, citing their ideological exclusiveness and extremist religious doctrine. He hinted that terrorist organizations such as Ansar Bayt al-Maqdis are just a facade for the Brotherhood. He said that the Egyptian people — not himself — decided to end the Muslim Brotherhood and that the violent scenes of the past months have been imprinted on the consciousness of Egyptians, thus preventing the Brotherhood from being accepted by society in the near future.

While he assured the viewers that as an observant Muslim he could never do anything against Islam, he made a distinction when it comes to political Islam, which he sees as a threat to Islam. Sisi said that strict approaches and interpretations have deprived Islam of its humanity, misrepresenting its nature and message. When asked about the Nour Party — a Salafist party that announced its support for Sisi only two days ago — Sisi said the constitution does not allow religious parties to exist.

He also said the law regulating protests was necessary to prevent chaos, which could, according to him, sabotage the country’s future. The current law is criticized by activists who see it as too prohibitive, with some even labeling it an "anti-protest" law.

Regarding his plans for developing the country should he become president, Sisi mentioned that they include the “development corridor” proposed by Farouk El-Baz, which aims to enlarge the limited piece of land inhabited by Egyptians. He also mentioned the Suez Canal axis project, among others, designed to provide employment opportunities and substantially increase Egypt's gross domestic product while attracting much-needed investment and foreign currency revenues.

Only a few days ago, Law 32/2014 was issued by interim President Adly Mansour to put an end to a chain of ridiculous lawsuits to overturn all economic transactions of the state, including sale of assets, land and privatization of state-owned companies. It was met by an uproar from leftist activists who used loopholes in Egypt’s jungle of conflicting legislation to sue the government and eventually annul privatization deals years after they were executed. This caused an incredibly messy financial situation within companies, exposed Egypt to hefty penalties and provoked a loss of investors’ confidence in the state.

Sisi also hinted several times that reinstating the rule of law is a top priority. At one point, he warned Eissa, “I will not allow you to use the term ‘military junta’ any more.” He then said he tolerated harsh criticism and abusive language that was used against him while he was minister of defense, but that this will gradually change. He showed himself as a military man who believes that persistence, discipline and hard work is all that is needed to solve complex problems.

Sisi said that the past three years have proved that Egyptians can remove any president or regime that does not respond favorably to their demands. He said it is the responsibility of the president to ensure that strong political parties thrive. He further assured Egyptians of his respect for diversity, saying that he grew up in one of Egypt’s oldest and most diverse neighborhoods where mosques, churches and synagogues were respected cornerstones of the community. Sisi also praised the role of Egyptian women in ending the Brotherhood rule, describing it as historic.

Sisi spoke clearly to his audience and made little effort to comfort his critics. While his fans cheered for his decisive words and composed demeanor, critics interpreted his words and style as those of an autocrat who is not used to being opposed. Sisi’s address is bound to raise concerns with Western analysts, with many already comparing him to Russian President Vladimir Putin.

According to Baseera, 78% of Egyptians have already decided who they will vote for in the elections. Yet, Sisi’s interview made many activists who were previously set on boycotting the elections change their positions and announce their support for Hamdeen Sabahi. Thus, Sisi may have gifted his opponent with millions of votes. But yet again, maybe this was done on purpose. Regardless, to succeed, if Sisi indeed becomes the president of Egypt, he needs to speak not only to his own trusting constituency but to others, including the undecided and skeptical audience who could easily turn against him due to his forceful gestures in speech and strict administrative style.