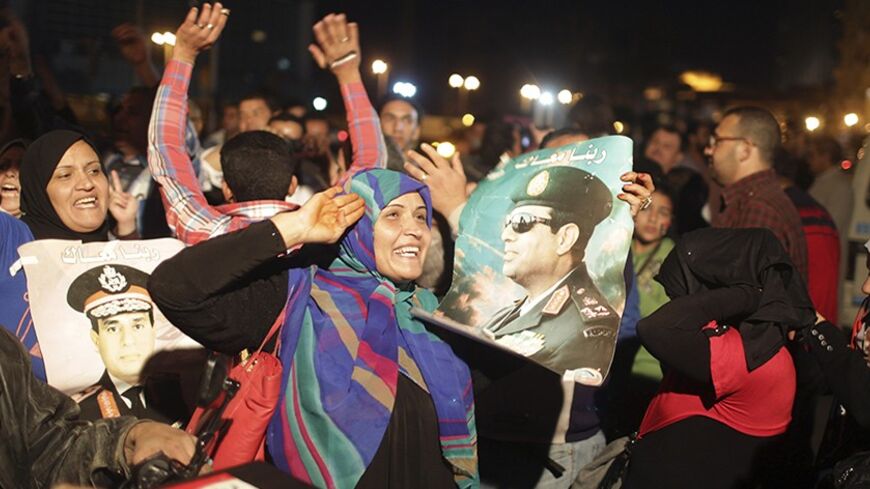 On March 26, Field Marshal Abdel Fattah al-Sisi announced his retirement from military service and his candidacy in Egypt’s presidential elections.

In a televised address that same day, Sisi said that it was his last day in military uniform after spending his "entire life" serving the country as a soldier. Possibly in response to critics who consider his candidacy anti-democratic, he said, “Never can anyone force Egyptians to vote for a president they do not want. Therefore, I am here before you humbly stating my intention to run for the presidency.” He added, “Only your support will grant me this great honor.” And while social networks saw many criticizing him for using state media to announce his candidacy, many Egyptians cheered upon hearing the news, which they had long waited for.

Sisi has been persistently compared with Gamal Abdel Nasser by Egyptians in the street and in the media. Nasser’s posters have been raised in Tahrir Square almost since the beginning of the January 25 Revolution, expressing a deep sense of nostalgia for the 1960s, although the majority of Egyptians living today were born during Hosni Mubarak’s rule, who took office as president more than 11 years after Nasser’s death.

Since the last days of Mohammed Morsi's presidency, protesters would often raise pictures of Nasser and Sisi side by side. Many would chant against the Muslim Brotherhood and call for the removal of “Morshed’s rule.” (Al-Morshed is the Brotherhood’s supreme guide.) One popular chant says, “Nasser said it [a] long time ago, do not trust the Brotherhood.”

The other remaining presidential contender of real weight is Hamdeen Sabahi, who came third in the 2012 presidential race with 20% of the vote. And as Sabahi is also a Nasserist, Nasserists must think that they have it made.

But is Sisi as Nasserist as Nasser’s loyal fans wish him to be and as his critics dread?

A few months after the 1952 revolution (or coup d’etat), the Revolutionary Council, of which Nasser was the most influential figure, dissolved political parties. And while “building a healthy democratic life” was one of the six principles of 1952’s revolution, that principle was never materialized during Nasser’s life — nor in his successors’ — as was the case of most of the other five tenants of the revolution.

In his latest speech, Sisi, however, tried to assure Egyptians of his commitment to plural democracy, saying, “It is neither right nor is it acceptable for my candidacy to confiscate the right and duty of anyone who sees himself worthy to come forward and run for president. I will be happy for the one chosen by the people to win.”

Sisi reiterated acknowledgment of the people’s power saying that it is the people and not the army who succeeded in toppling two regimes.

Egypt was a rich country when Nasser became president. If he succeeds, Sisi, however, will be assuming responsibility of a country deeply in debt with a faltering economy and facing hostile challenges at home and abroad. Despite these monumental challenges, which Sisi acknowledged, he said that he had not a “single atom” of doubt that Egypt can change for the better. On social networks, many people expressed admiration of Sisi’s courage to take on a “mission impossible.” Others were pessimistic expressing sorrow to see another “doomed experiment” yet to start after so many failures that the country has seen.

There are many similarities, but also differences, between Nasser and Sisi.

Both came from the army, although Nasser was a mere middle rank colonel in 1952 while Sisi was promoted to the highest army rank, field marshal, one month before resigning to announce his candidacy. Both were considered close allies who later turned to worst enemies of the Muslim Brotherhood. Both removed a sitting president; Nasser removed Egypt's first president, Mohammad Naguib and Sisi removed Morsi. Both once had close relationships with the United States before the relationships went dead sour. Both are charismatic and have a huge following of loyal fans and supporters. Sisi earned people’s support before becoming a president, whereas Nasser acquired most of his popularity while in office. Both men gained their support through pushing a nationalistic agenda of independence but while Nasser was a professed enemy of Israel, against which he fought in three wars, Sisi seems committed to peace with Israel, so far.

But where Nasser was confrontational and impulsive, Sisi seems calm and calculating. Nasser presented a populist agenda focusing on redistribution of wealth, while Sisi’s message is: There is no wealth to be distributed, Egyptians must first work hard to get out of the economic helter-skelter, create wealth and stop relying on foreign aid. And while Nasser created a huge governmental apparatus and a sprawling collection of state-owned public sector companies that drained Egypt’s treasury, Sisi hinted that Egypt needs to streamline this “flabby” governmental apparatus.

Both Nasser and Sisi turned East when relationships with the United States went sour — Nasser to the then Soviet Union, Eastern Bloc, India, Indonesia, Africa and even Latin America; Sisi to Russia, for now. But while Nasser was a hero in Africa because of the role he played championing liberation movements putting an end to the era of colonization, Sisi steps toward office with difficult relations with Africa and Nile Basin countries. This threatens Egypt’s bloodline and its share in the Nile waters after years of neglect from Sadat and arrogance from his successor, following a failed attempt on Mubarak’s life while on a visit to Addis Ababa in 1995.

On the other hand, while Nasser had a terrible relationship with Saudi Arabia that turned into a semi-proxy war in Yemen in the 1960s, Saudi Arabia (as well as the United Arab Emirates and Kuwait) stood firmly behind Egypt and continues to support Sisi and Egypt’s interim government, pouring into the country much-needed free fuel shipments and billions of dollars in foreign currency supply. The latter rescued Egypt’s Central Bank (CBE) from defaulting on debt payments and other commitments. Egypt’s foreign reserves that stood at $37 billion on Jan. 25, 2011, became gradually depleted as the CBE pumped dollars into the banking system to finance imports such as wheat and fuel necessary for subsidized bread and energy as well as raw materials and components needed to keep industry output afloat. By June 30, 2013, most of the reserves had evaporated, leaving around $15 billion in the Central Bank’s ledger — a dangerously low level which, to be fair, was reached a year earlier and could only be maintained during Morsi's tenure through assistance and loans from Qatar, Turkey and Libya.

As for regional ambitions, Nasser had plenty. In fact, he became a symbolic leader of the developing world. The Non-Aligned Movement, which he co-founded along with Nehru, Tito and Sukarno, had 120 member-countries and 17 observers. Nasser headed the movement between 1964 and 1970, when he died. As a result, Nasser could mobilize a landslide majority in the UN General Assembly that infuriated Western powers such as the United States, Britain and France. In his candidacy speech, Sisi promised to rid Egypt “and the region” from the evils of terrorist organizations. Does this include direct or indirect intervention in Syria to combat the Islamic State of Iraq and al-Sham (ISIS), Jabhat al-Nusra and al-Qaeda?

If Sisi wins, does this mean a revival of Arab nationalism? Arabs have so much in common; language, religion, cultural proximity, a seamless territorial connectivity and strong emotional bonds. But Arab nationalism based on old-style chants cannot work. Arabs need to work hard on economic integration to shift their trade relations’ focus inward. Sisi expresses a commitment to social justice, “that it is not acceptable for sick Egyptians to be unable to find affordable medical care.” But he also made so many hints at having to face harsh economic realities and work hard to save the country’s economy as a first priority.

So, before Nasserist enthusiasts prematurely celebrate a return to the 1960s, they should read more carefully into Sisi’s messages. It would be foolish for Sisi or anyone else to repeat mistakes that proved disastrous and policies that could never be sustained.

Perhaps what Sisi has most in common with Nasser is a confessed vision to building a strong and independent Egypt. And in light of the hardships now and those expected ahead, no one can envy the coming president of Egypt, whoever he may be.