Egyptian activists struggle to determine who is to blame for Egypt’s predicament, and how to set the revolution, and the country, back on track. 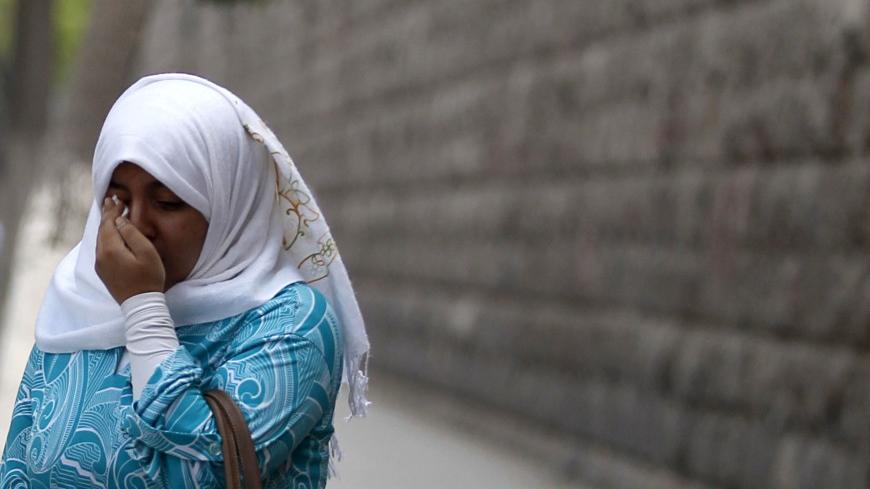 A woman shields her face from tear gas during clashes between students, who are supporters of the Muslim Brotherhood, and riot police in Cairo University, April 9, 2014. - REUTERS/Amr Abdallah Dalsh

A few days ago, activist Shahenda Maklad, 76, despite being sick and bedridden, carried herself to the Lawyers Syndicate where she signed a notarized affidavit supporting (former) Field Marshal Abdel Fattah al-Sisi’s candidacy for Egypt’s presidential race. The law requires that a candidate must get a minimum of 25,000 such affidavits with at least 1,000 of them per governorate from 15 of Egypt’s 27 governorates.

As soon as news leaked that Maklad was supporting Sisi, she was brutally attacked on social media with some activists accusing her of stooping too low and smearing her entire history of struggle. In response, to their attacks, Maklad criticized the elitist activists who use banners of “martyrs’ blood” for their own egotistic gain while having no feet to stand upon in the street among Egyptians.

To this day, Maklad continues to fight for what she believes in. In January, she demanded the removal of Mohamed Ibrahim, the minister of interior, and condemned torture and brutal police practices against detainees. Last week, Maklad was one of the supporters of the women’s sit-in at the presidential palace, demanding the release of activists Ahmed Douma and Ahmed Maher, sentenced for three years in prison for violating the demonstration law. Yet, while opposing certain actions of the interim government, she was brave enough to break ranks with her usual club and announce near the end of last year that the majority of Egyptians are looking forward to having Sisi as Egypt’s next president. Following her own conviction, she decided to support him and not her lifelong friend and leftist opposition compatriot, Hamdin Sabahy.

In 1997, Maklad, along with three of her friends, Wedad Mitry, Safinaz Kazem and Amina Rachid, was featured in a highly acclaimed Canadian documentary film, “Four Women of Egypt.” During Morsi’s reign, Shahenda’s iconic image of being hushed in front of the presidential palace on Dec. 5, 2012, by the heavy hand of one of the Brotherhood’s leaders/thugs and a close aide to Morsi, disturbed many Egyptians and thousands rushed to the street in protest, moved by this particular photo. Robert Mackey of The New York Times' blog The Lede headlined that image as “Clash of Cultures Within Egypt Made Visible in Single Frame of Video.”

Maklad has been an Egyptian heroine and a symbol of Egypt’s revolution(s) since forever. She was a cofounder of virtually every opposition movement formed in the past few decades, including Kifaya, the National Association for Change and Egyptian Women for Change. The list is pages long. Hers could be seen as a “Lifelong Trip to Tahrir” as the headline of Radwan Adam’s article suggested in February 2012, one year after Egypt’s January revolution. Adam further recalled when Che Guevara and Gamal Abdel Nasser went to Kamshish to salute the young woman, who dared to rebel against feudalism and lost her husband, who was assassinated in the fight, along with her peasant friends.

Since then, Maklad has championed the cause of poor farmers. I remember before 2011 being invited to the launch of the “farmers union,” which she founded a few months before the January 2011 revolution. She is simply the personal hero of many people. That does not mean she could do no wrong. But to imply that she sold out the revolution is a little silly and screams of ignorance and fake moral superiority.

Maklad is not the only activist pushed outside the exclusive “revolutionary club” presided upon by a few self-appointed hard-core activists. According to overzealous revolutionaries, the list of exiled members is long and includes, believe it or not, Abdel Gelil Mostafa, former head of Kifaya and National Association for Change; Ibrahim Eisa, the renowned journalist who was tried and persecuted during Hosni Mubarak’s rule; Kamal Khalil, an iconic leader of almost every important uprising, demonstration and protest; Ahmed Fouad Negm, a revolutionary poet who was persecuted by every regime since the 1960s; Salah Adly, a leader of the communist movement; and Bahaa Eddin Shaaban, leader of the National Association for Change and the Egyptian Socialist Party.

Many activists and revolutionaries have become so disillusioned and frustrated with the popular tide turning against their lofty discourse. Shokeir, a Twitter activist, may have best expressed this isolation and estrangement in a few simple words: “Wait for no one,” which expressed aloneness, despair and loss of faith. The screaming pain of despair, aloneness and loss of faith could only be equaled by the sad relief of when you no longer have high expectations, or any expectations, from anyone and as a result feel the comfort of never having to be disappointed again.

Has it all been in vain? The martyrs' blood and the high hopes for democracy, dignity and social justice? Questions of self-doubt and the deafening silence are heard from youths, in particular those who participated in the 18-day uprising that ended 30 years of Mubarak’s rule and engaged in the countless Friday sit-ins and marches that followed. Some envy the martyrs who honorably died by gunfire in their glory only to leave us revolutionaries to die by the sword of silence, in the shadows created by the absence of cameras and the silence screaming from departing microphones and vanishing media attention.

It is unfair to ask revolutionaries to be “wise” and calculating. That is just against the nature of revolution. You cannot be exactly pragmatic and prudent and at the same time face armored vehicles and security forces with bare chests. But is it just about being young, passionate and idealistic? Is it just about the promises made to friends bleeding in your arms while you watch life slip away from their dimming eyes? In many cases, I would say yes. This is the case. In other cases, it is more about identifying with a certain exclusive club that gets more exclusive when members are kicked out on charges of betraying the revolution. It may even be about that monstrous collective ego that can only be fed by crushed images of those once considered great and heroic symbols of struggle. It probably does make one feel morally superior when everyone else is eventually found guilty of treason.

In the beginning it was easy. Just vilify the foloul, high officials and top aides of the Mubarak regime. Then the label was extended to include everyone who was once a member of the National Democratic Party. Then it was yet expanded again to include those who ever had anything to do with or even shaken hands with anyone related to the Mubarak regime. It was expanded again to include those who voted for Ahmed Shafik or Amr Moussa in the 2012 presidential elections. And as the monster needs to be continuously fed, new flesh must come at the end from the activists themselves, leaving only a handful of revolutionaries who belong to that exclusive club, who secretly even have smaller circles of who is really true revolutionary and who is so and so. At the end, a few are left at the feet of the Press Syndicate, each taking a mental selfie while really admiring his ability to ignore a camera that doesn’t exist in the first place.

There is a unique Egyptian sound gesture, which comes from between the front teeth to barely escape through tightly, pressed lips. It is a subtle gesture expressing utter sorrow and disgust. Many activists make that sound as they exchange tales of those who betrayed the revolution and sold out the blood of the martyrs. You cannot help but wonder: Who actually betrayed the revolution?