Part of an estimated 180,000 child laborers in Lebanon, shoeshine boys, many of them from Syria, face a hard life on Beirut's streets. 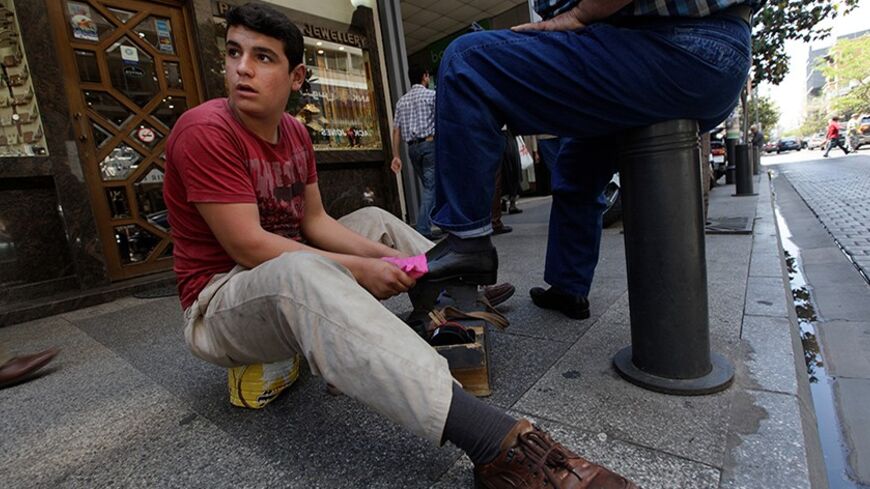 The boys roved by themselves and in small packs up and down Hamra Street in Beirut, shoeshining equipment in one hand and attracting the attention of passers-by with the other. Ahmed Hamsa, 15, from Daraa, Syria, is the unofficial ringleader of a group of about 20 boys on the streets of Beirut. They come and go all day long, nearly all from Daraa. Some shy away from the cameras while others, like Ahmed, speak boldly. All refuse that I meet their families. “They wouldn’t like it,” Ahmed said, while pointing to another boy. “His father would beat him if he knew.”

These are some of the shoeshiners of Beirut, transported from the neighboring country embroiled in a civil war. They are among the estimated 180,000 child laborers in Lebanon, according to the Ministry of Labor. UNICEF communication specialist Miriam Azar said that number is higher. “[That number] is an estimate … basically we’re talking about hundreds of thousands,” Azar said.

Lebanon now has the highest concentration of refugees in the world. Last month, the millionth Syrian refugee was registered with the United Nations. Before the Syrian conflict broke out, the population of Lebanon was about 4.2 million. Syrians now make up more than a quarter of the country.

According to UNICEF, one in 10 Syrian refugee children in Lebanon are working. With only one-third receiving schooling and the difficulty for many families to make ends meet, the number is likely even higher. These estimates from the Syrian spillover can easily be seen in urban areas throughout Beirut, with children begging, shining shoes and selling everything from gum and tissues to white gardenia necklaces and roses.

The first time I saw Ahmed, he was fighting with another shoeshiner, a brawl that escalated until a bus driver stopped in traffic to pull them apart.

Though the group of boys are constantly fighting, both verbally and physically, they spend more time with each other than anyone else in their lives. “We meet here in the streets, we have breakfast together, we consider ourselves as inseparable brothers,” Ahmed said.

He and his brother both work in this area, and are two of the lucky ones. They are here in Lebanon with their family of 11, living in the Kola area of Beirut.

Though it's risky working on the streets, some child labor is less visible in Lebanon, but often as prevalent and damaging. Agricultural child labor exists in much of the country outside of the capital city, as well as young boys and girls toiling in factories and garages. But this kind of labor is much more difficult to monitor, Azar said.

Ahmed and his brother usually get to work about 7 a.m. Hamra Street is always busy with people, and Ahmed paces all day with a slight limp — his shoes are too small and hurt his feet. He hangs outside of cafes asking to polish shoes before being shooed away. Ahmed came from Syria a year ago, and this is the first time he has had to do this kind of work. He would rather be in school than on the street, but he said his family needs the money that he and his brother bring in.

Nighttime is most problematic for them, many of the boys said. When they go home at the end of their work day, they have to be careful of “thugs,” or young men who are after their money. Most of the boys said they have been robbed at least once by knife point.

This is the case in other parts of Beirut as well. Jihad from Aleppo, 12, shines shoes in the trendy bar district of Mar Mikhael. He comes from Tripoli to work, and when it is time to go home, he too fears robbery.

“We leave the streets very late at night, at around 2 or 3 a.m. There are armed men and thugs, they take our money. Sometimes, if we worked and made some money, we are afraid to leave at night,” Jihad said.

As night falls, Ahmed moves into the shadows and behind walls every time he sees a police car. He has been arrested three times, he said.

“[The police] make me pay 50,000 [Lebanese pounds], and they take my shoeshining kit and throw it in the garbage. The next day, I get another one,” Ahmed said. It costs him about 40,000 Lebanese pounds to buy the set.

Watch interviews with the boys in Arabic: Part 1, Part 2

To many of these boys, shining shoes is their job. But, according to Lebanese law, it's technically begging, and because the age of criminal responsibility in Lebanon is 7, the Internal Security Forces (ISF) can arrest them, particularly when there has been an order to “clean up the streets,” said Anthony MacDonald, UNICEF chief of child protection.

MacDonald mentioned that the system set up to deal with child labor has become very strained with the influx of refugees. “It’s a system that was already under great strain previously, never mind an extra million or so refugees — so it’s even more burden on the system.”

The Home of Hope is often where many of these children end up once they are picked up by the ISF. The nonprofit organization has been operating in Lebanon since 1999 and focuses on providing a home for children at risk and unaccompanied minors.

The organization is situated in Kahale, in the north of Lebanon. The building holds 70 beds and is the main receiver of children who are picked up off the street by the police. Though most of them are long-term stays, the smaller group are those boys and girls who come off the streets and stay anywhere from a few days or weeks to months.

Assistant Director Noah George is quick to point out that while the Syrian crisis has increased the number of children on the street five or six times, the problems are the same as they have been for years.

“The background, the issues that they face, their family issues, their situation in being neglected or abandoned actually hasn’t changed at all. All of those issues that are prevalent now because of the crisis, they were clear to us years before Syria fell apart,” George said.

George echoed the dangers on the streets that the boys mentioned. “They are vulnerable to violence, all forms of abuse. … A lot of them are exposed to sexual abuse, child prostitution, drug trafficking. Sometimes drug experimentation, and even organ trafficking,” George said.

For MacDonald, illegal child labor in Lebanon will only get worse so long as Syrians do not have access to legal employment. He believes changing this, along with providing education rather than the back of a police car, is the way to mitigate the problem. Arrest is not conducive to solving the problem in the long term, MacDonald said, nor is it an effective way of managing the issue.

“The problem is huge,” he said, adding that the more Syrians have to resort to illegal forms of income generation, the more susceptible they are to exploitation.