Children's education at risk in Lebanon due to economic crisis

More than 700,000 kids are at risk of never returning to a classroom due to rising poverty, while thousands have dropped out of school to engage in child labor or get married. 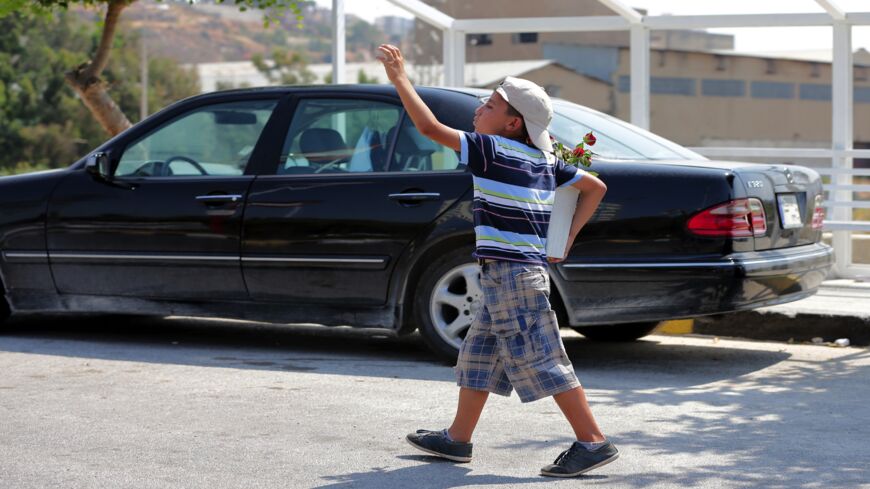 A Syrian refugee child sells flowers in the street in the northern Lebanese city of Tripoli, north of the capital, Beirut, on Sept. 2, 2015. More than 13 million children are being denied an education by Middle East conflicts, the UN says, warning "the hopes of a generation" will be dashed if they cannot return to classrooms. - JOSEPH EID/AFP via Getty Images

BEIRUT — On iconic Hamra Street in Beirut, many children wander unattended. Some of them dig in garbage containers. Others try to sell flowers or clean the shoes of passersby. Most of the girls sit on their mothers' laps while holding their younger siblings. They keep their hands outstretched, follow pedestrians ask for bills.

“These kids should be at school, but they are in the streets working because they are just fighting to survive," said Ettie Higgins, UNICEF’s representative in Lebanon. The 2021-22 academic year is seeing the loss of 30,000 students who had to drop out of school.

The economic crash in the Mediterranean country has impacted all sectors of its society. Children suffer the consequences of one of the worst crises in history in different aspects of their lives, but their education is seriously at risk. According to UNICEF, 15% of families in Lebanon have stopped their children’s education. One in 10 children has been sent to work while Lebanese society witnesses an increase in child marriage among younger girls, especially from the Syrian refugee community.

“We are the ones responsible for our own education," said 16-year-old Jaden. Besides going to a Lebanese public school four to five hours a day, this Syrian teenager tries to learn more by attending classes at the centers run by the Spanish nongovernmental organization 26 Letters.

Around 1.2 million children have seen their education affected or even interrupted since October 2019. “During the revolution, a lot of kids stopped going to school. Then the pandemic came, and most of them didn’t have the resources to adapt to online education," said Janira Taibo, cofounder of 26 Letters.

Despite attending classes, more than 700,000 children are at risk of never returning to a classroom due to rising poverty. “We are in a state of panic," Higgins told Al-Monitor. "The schools have been closed for so long and families had to make difficult decisions.” Three out of 10 households have had to cut their spending on education. The rising price of fuel has hindered families' efforts to bring their kids to school, and most children are forced to study without textbooks. “Some families choose to marry off their daughters early and send the older brothers to work, and the young boys are given the opportunity to get their education," she added.

“Parents are finding it hard to bring food to the table, so they send their children to work in positions that pay absolutely nothing while they work for 14 hours," Taibo said. In an October 2021 UNICEF survey, 12% of families said they send at least one child to work. The situation is especially hard for Syrian refugees. With additional barriers to education and depending on a child’s socioeconomic status, there can be up to four years’ difference between attainment levels compared to Lebanese children. Around 200,000 school-age Syrian refugee children — 30% of the ones hosted by Lebanon — have never been to school.

Young girls and teenagers suffer greatly from the impact of poverty. One in five Syrian girls between the ages of 15 and 19 in Lebanon is married. For Lebanese girls, around 4% are married. Experts fear the true figures may be much higher.

“Early marriage means stopping their education. But these girls are asking to go back to school in order to build their lives; they don’t want them to be over so soon,” said Higgins.

“In my class, a lot of children have left to work or girls are just staying at home," Jaden said. Most days, the teenager goes to school just “to do nothing."

"We spend four to five hours sitting in a classroom without a teacher because they don’t come since they are not getting paid and they don’t want to teach us for free,” Jaden said.

The instability of the public education system in Lebanon has been exacerbated by educators' strikes. Many teachers complain about inadequate health care coverage and lack of pay, and they are asking for a transport allowance. Some of them are determined not to return to school until the government meets their demands.

Teachers were getting paid US$1,600 two years ago, but now this salary equals US$90 a month. The depreciation of the Lebanese lira only allows their wages, given in local currency, to be used to pay for gas to and from their workplaces. Around 59,000 teachers are affected by these critical conditions; thousands of them are barely making ends meet.

“Teachers want to return to school; they are committed, and they want to return to their normal routines. But they need to earn a living salary as well,” Higgins said. Hundreds are choosing to leave the country in search of decent lives.

The lack of an education can have traumatizing implications for these children. In the short term, it can lead to learning loss, mental distress, exposure to violence and reduced development of social skills.

“I hate going to school. I am not motivated at all because I feel like I know nothing and I understand nothing,” Jaden said. In the long term, when these children and teenagers become adults, they will have to face more difficulties getting a job and even interacting with their fellow citizens.

Since the crisis started two years ago, thousands of families have chosen to switch their children from private schools to public institutions. The public educational system, once prized throughout the Middle East as a regional leader, cannot take the pressure. But not only are the children and their families losing — the bigger loss is for Lebanon itself.

"If the situation persists, it has the potential to impact the social cohesion of the country; already it is a loss of capital and a huge loss in economic terms," said Higgins. Inequalities have already increased between those who can afford to get an education and those who cannot.

“All of them are lost generations," said Taibo. Nongovernmental organizations like 26 Letters that were developed with a focus on education have been forced to start helping their students' families with a more holistic approach. Now they also have an emergency response program that provides food, medicine and family support to try to create a better environment for these students to get an education. “When we are helping these kids, we are helping their future children,” said Taibo.