In an interview with Al-Monitor, former Defense Minister Shaul Mofaz argues that US over-involvement in Israeli-Palestinian talks only alienated both sides, and the only feasible solution is a two-stage agreement with the Palestinians, even while talking with Hamas. 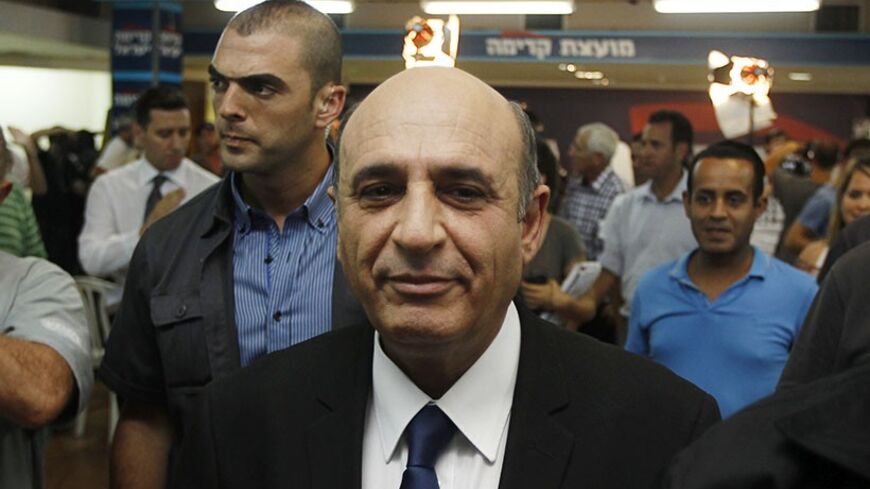 “The more involved the Americans get in the negotiations, the greater our differences with the Palestinians become.” That was what former Defense Minister Shaul Mofaz (Kadima Party) argued, following the failure of the Kerry initiative to reach a diplomatic arrangement.

In an interview with Al-Monitor, Mofaz estimated that there would be an effort to renew the negotiations in the next few months. If it is an American initiative, however, this will only increase the difficulties that the parties face. “I was still in uniform when I attended the Wye River Summit, which led to the Protocol Concerning Redeployment in Hebron. Whenever the Americans were in the room and we had no direct access to the Palestinians, everyone spoke only to the Americans and as a result, became even more entrenched in their positions,” said Mofaz, the former Israel Defense Forces chief of staff. According to him, US involvement should include accompanying the talks and providing guarantees, but it is very important that the two parties speak directly to one another. In the last attempt, Prime Minister Benjamin Netanyahu and Palestinian President Mahmoud Abbas did not even meet. Now Mofaz is calling for the implementation of a plan he presented in November 2009. His proposal calls for the creation of a Palestinian state on 50% to 60% of the territory of the West Bank as first stage, followed by a second stage of negotiations in a set time frame to resolve core issues. Mofaz did not rule out talks with Hamas in his plan either.

Al-Monitor:  Did the negotiations ever have a chance?

Mofaz:  No, there was no way to reach an agreement in just nine months. Furthermore, Netanyahu didn’t want an agreement, and he wasn’t capable of reaching one either, personally or politically, considering his coalition. He had no plan at all. With him, political survival overrides any desire to bring about an agreement. Netanyahu set so many preconditions that they became an obstacle as soon as they were on the table. They were intended to cause the talks to fail. Recognition of Israel as a Jewish state should have happened at the signing of the agreement, and not as a condition to carry on the talks. The distance between us and the Palestinians only increased since the negotiations. The lack of trust and the unwillingness to reach an agreement are much greater now. Similarly, the government turned into a coalition of survivors. [Justice Minister Tzipi] Livni and [Finance Minister Yair] Lapid should have quit, but they stayed for political reasons of their own.

Al-Monitor:  What about Tzipi Livni? You don’t think she really believes that there is still a chance?

Mofaz:  It is obvious that she serves as a fig leaf for Netanyahu to ensure his political survival. She was part of a process that was destined to fail, and in the end, it was damaging. And I’m not even bringing up the implications on the ground, such as the rise of Jewish terrorism. The greater the crisis becomes, the more actions we see clearly being taken by "price tag" activists, and in my estimation, we will see even more. They should be defined as a terrorist group so that we can begin using administrative detention against them, just as the Shin Bet knows how to do. But Netanyahu hasn’t been willing to recognize them as a terrorist group, making it impossible to really deal with the problem.

Al-Monitor:  Over the past few days you brought up again your own diplomatic proposal as the only way out of the current dead end. Is it possible to implement it even when the two leaders aren’t talking to each other?

Mofaz:  Certainly. My conclusion is that we have to head toward an interim agreement that would include security arrangements for a transitional period. I believe that most Knesset members, including Lapid, would support the proposal, because it is the only thing that offers a pragmatic approach to a two-state solution. As far as the settlers are concerned, what it actually entails is going to them and telling that the die is cast. It provides time to get organized while assessing the Palestinian Authority’s ability to create a state. When I presented the plan to Netanyahu in 2009, Uzi Arad, who was his national security adviser, said that strategically, it was the right thing to do. Ron Dermer, who is now the ambassador to the United States, explained to him that the Americans support it. I met with President [Barack] Obama in 2012, when I joined the government, and he told me that he agrees that it has to start with security borders.

Al-Monitor:  But it also depends on the other side.

Mofaz:  What people have to understand is that the status quo will end one day. Mahmoud Abbas also understands the reality in which 100,000 Palestinians come to work in Israel every day. They can see the country flourishing, but they wake up at 3 a.m. and go home at 6 or 7 p.m., just to earn 100 shekels [about $28]. That is why it can’t last for generations. We don’t have the privilege of waiting another five years, and there’s someone to talk to now. Unlike the second intifada, when [PLO leader Yasser] Arafat was behind the suicide bombers, Abbas doesn’t instigate terror. But in the meantime, we’re seeing phenomena like David the Nahal soldier pop up, and there will only be more of that.

Al-Monitor:  Your diplomatic plan, which has evoked so much interest, has been sitting on the shelf for almost five years now. What opportunities were missed in the diplomatic arena?

Mofaz:  During those years in which Netanyahu was in power, we have moved further away from an agreement. It was an innovation when Netanyahu declared his support for a two-state solution after he was elected. In practice, however, the two sides moved further apart. And something else happened here, too. Netanyahu failed in the one thing that he considered to be the most important of all: stopping Iran’s nuclear program.

Al-Monitor:  Was it Netanyahu’s fault?

Mofaz:  The mistake was that Netanyahu kept talking about attacking Iran. That’s why we weren’t part of the agreement. The Americans conducted secret negotiations with Iran and determined the principles for an interim agreement, which is bad for Israel and which allows Iran to continue to enrich uranium. Assuming that the permanent agreement would be similar, Iran will become a country on the nuclear threshold in a very short time. The result of all of this, is that our strategic situation has gotten worse.