Kadima leader Shaul Mofaz explains in an interview with Mazal Mualem that he is gearing up to re-launch his diplomatic plan for Israeli-Palestinian negotiations. 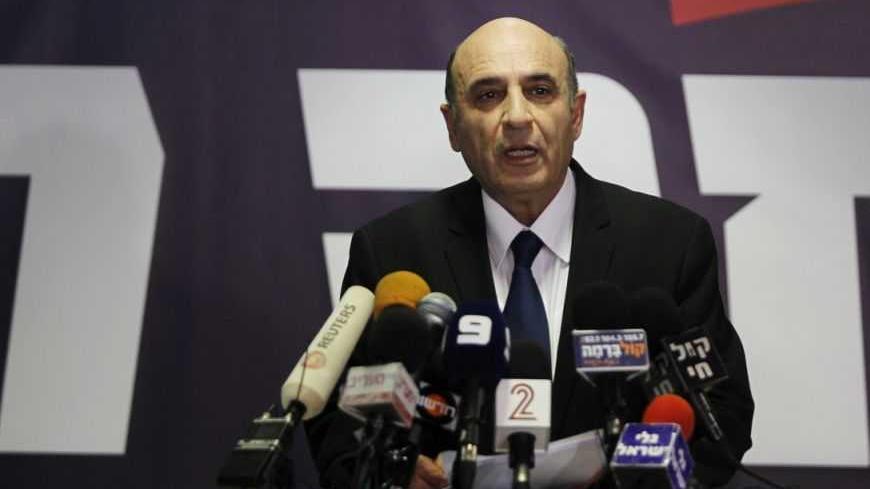 President Barack Obama’s upcoming visit to Israel next month has raised the Israel-Palestinian diplomatic process all at once to the top of the public agenda – an issue that has been dormant for four years. Former chief of staff and Kadima party chair Shaul Mofaz is gearing up to re-launch his diplomatic plan that aroused a great stir in the world three years ago.

The United States has returned the “diplomatic process” to the coalition negotiating table, after it disappeared almost completely from the public discourse. At the same time, the Americans are clearly hinting at the proper place this issue ought to receive on the priority list and, therefore, what kind of coalition should be assembled. Even [Prime Minister Benjamin] Netanyahu, who distanced himself from this issue throughout the election campaign, has been talking over recent days about his willingness to renew negotiations with the Palestinians, and is using this card in his efforts to form a broad-based government.

Shaul Mofaz, who does not hide his desire to join the government, updated his diplomatic plan that was titled, “Determining Borders and Security Arrangements First.” This was a plan he launched three years ago [in 2009] that was disparaged at the time by then-Kadima chair Tzipi Livni. However, the program won support in the international community that viewed it as a beacon of light in the political wilderness: a pragmatic, sober program that could jump-start negotiations with the Palestinians.

Mofaz himself is a political tragedy. While the highest past and present defense officials voted for him in the recent elections, the public did not place their trust in him and he barely crossed the electoral threshold to the Knesset. There is an incomprehensible gap between Mofaz the politician and Mofaz the defense expert. As a politician, he's viewed by the general public as a “zig-zagger,” an opportunist, a man who does not stand by his word; in many cases, these appellations are justified. But as [former] Defense Minister and Chief of Staff, Mofaz enjoys the widespread esteem of the Israeli defense system and the international community. But Mofaz does not surrender to despair. He believes that even with two mandates, he is still relevant and influential. In the coming days, Mofaz will re-launch his political program; he updated it on the heels of the Arab Spring which, he claims, transforms an agreement with the Palestinians into an almost existential issue.

In a special interview with Al-Monitor, Mofaz explains why.

What changed in your program?

“I didn’t change its content, but I emphasized the immediate importance of the diplomatic negotiations. The changes in Syria and Egypt, changes that are also likely to take place in Jordan and the Palestinian Authority as well, create regional instability, raising the specter of deterioration. In such a reality we must look for stabilizing strategic moves, and an arrangement with the Palestinians is just such a move. In the last four years, this subject has been pushed aside by the Netanyahu government; the result is that Hamas has become stronger and the Palestinian Authority has become weaker. Therefore, time is not on our side nor on the side of the Palestinian people. More than ever, this is the time to advance a settlement.”

But what, in fact, do you propose?

“What I proposed three years ago, and is just as valid now than ever. Since a permanent settlement cannot be reached now, I propose an interim arrangement. To discuss the borders and security arrangements first. I do not demand Palestinian recognition of us as a Jewish state just now, that we will keep for the second stage. According to my program, within two years a Palestinian state will rise that will extend over 60% of the territory. This will “anchor” the situation of two states. We will leave the issues of [Palestinian] refugees and Jerusalem for the final settlement.”

Do you think this will succeed?

“In order for my program to succeed, the United States must be involved, and now we received the opportunity that will enable jump-starting of the process. Obama also believes in borders and security arrangements first, he said this to me in June of last year when I met him as deputy prime minister, in the short period in which I served in Netanyahu’s government. At that meeting, when we talked about my plan, he said, ‘You are right, but they, in other words the Palestinians, are concerned that it will turn into a permanent settlement.’ I answered him by saying, ‘That’s why you are here, to provide an international guarantee for four to six years.’ Obama did not intervene at the time and now it is totally clear that he will be involved. Even though we have been hearing recently that he has no intentions of coming with an organized plan, it is clear that he will outline the direction. In my opinion, the ‘direction’ will be a discussion of borders and security arrangements; regarding the final settlement, it is clear to everyone that it will bring an end to the conflict and recognition of Israel as the nation state of the Jewish people".

So why not aspire immediately to a permanent settlement?

“The gaps between the sides are so wide, and the lack of confidence so great, that it is impossible to reach a permanent settlement in one step. I want them to have a state, and us to have defensible borders. At the second stage we will conduct negotiations between states, and reach a permanent settlement. The third leg of this plan is economic. A package-deal of cooperation between us and the Palestinians, in order to reach the permanent settlement with greater power. Under these circumstances, the Arab countries will renew their diplomatic ties with Israel including an exchange of ambassadors and trade relations. The possibilities are limitless.”

What about the partner to these negotiations, [Palestinian President] Abu Mazen, who met with [Iranian President Mahmoud] Ahmadinejad last week [Feb. 6]?

“Abu Mazen is our partner. The problem is that the ‘no partner’ concept led by the previous government, pushes it [the Palestinian Authority] into the arms of the extremists. If we, the Israelis, would have met him, perhaps he wouldn’t have met with Ahmadinejad. This policy causes us to strengthen the peace-opposing Shiites, Iranians and Hamas, and weakens Abu Mazen.”

As an example of this, Mofaz cites the Pillar of Defense operation that was considered a military success but a diplomatic failure. “That operation brought Khaled Meshaal to the Gaza Strip,” Mofaz says, “and strengthened Hamas in the West Bank.”

You don’t think it’s too late for Abu Mazen?

“So long as we don’t try this [diplomatic] option and make the most of it, it’s not too late. Currently he is Palestinian Authority chairman, and that status is recognized in the world. We can’t wait for another partner, because time is not on our side and the time factor is very significant.”

Mofaz cites what he feels is Israel’s greater danger: the diplomatic point of no return, when afterwards, “Even if we’ll want to, we won’t be able to reach a settlement and then Israel will become a bi-national state, God forbid.”

Hamas didn’t get a kick in the pants from Pillar of Defense?

“Yes, it received a military blow, but Hamas is a semi-military organization with units, a command backbone and advanced weapons. The reality is that the Gaza Strip is controlled by a terror organization with its own territory. Throughout Netanyahu’s four years, the Hamas became stronger and its status among Israel’s opponents rose. This terror organization can pride itself on its success of launching missiles to Tel Aviv and Jerusalem.”

Do you think that Abu Mazen can stand up to such an organization?

“If the world will be with us, it will be very hard for Hamas to sabotage the agreement. It is clear that not only will Hamas try to torpedo it [the agreement] but also the Iranians, the [Islamic] Jihad, Hezbollah and al-Qaeda. But if the world will stand by us, and Israel will be adamant, it will succeed — it will be a very stabilizing step on the regional level.

And what do the Palestinians think about the plan?

“I met with high-level Palestinian Authority officials and presented the major points. One of the meetings was with someone very high up. At first he was skeptical but in the end, he said it was a very pragmatic plan. Nevertheless, he expressed the concern that an interim agreement would turn into a permanent one. I answered him that an American guarantee would solve this exact issue, I told him that I don’t believe there would be an Israeli prime minister that would violate an express commitment to the United States.”

How important will Obama’s intervention be?

“His visit to Israel is of great importance. In effect, he is telling the sides to “get going” and clearly he has the authority to push such a process. An American president in his second term of office is much stronger and more influential, and he can do a lot over the next four years. If he would listen to my advice, I would recommend that he begin with the issues of the borders and security arrangements. That ensures success because these issues are ripe for advancement.”

And Netanyahu is capable?

“He can, if he only will want to. Of course the chances are low-to-impossible in a narrow coalition of the right, but diplomatic processes are dependent on the ability to lead, the desire and determination to promote it.”