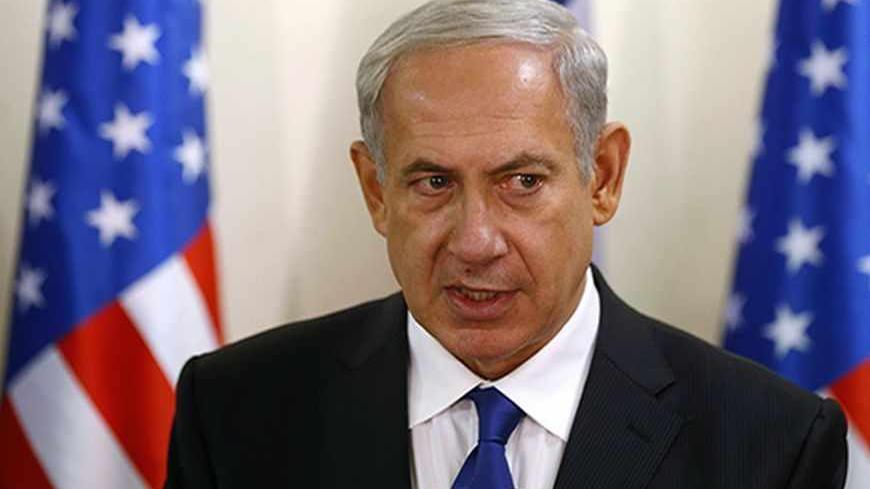 Israel's Prime Minister Benjamin Netanyahu speaks to the media after a meeting with US Secretary of State John Kerry at the prime minister's office in Jerusalem, Sept. 15, 2013. - REUTERS/Larry Downing

The most important speech delivered so far at the current session of the UN General Assembly in New York was the one by US President Barack Obama on Sept. 24. Obama’s tone was measured and levelheaded, and he did not get dragged into wrangling over credits and arguing about “who won” in the battle over Syria — Russian President Vladimir Putin or himself. But the speech also contained dramatic news: the return of the formula — which emerged and made headlines during Obama’s first term but dissipated shortly thereafter — “Bushehr for [Jewish settlement] Yitzhar.” That is how we described it then, on the eve of Prime Minister Benjamin Netanyahu’s first meeting with Obama at the beginning of 2009. The deal was simple. It was dictated by the Americans: We will deal with Iran, you take care of the Palestinians. The United States will rein in the Iranian nuke, Israel will stop building settlements and work toward the establishment of a Palestinian state.

Obama’s policy failed dismally and disappeared. The peace process was stalled for four long years and dropped off the agenda. And now Obama is back, with a speech designed to define his second and last term, with the same equation: There are two subjects on the agenda, the Iranian and the Palestinian; the United States will deal with both in tandem, and it expects all sides to cooperate, including Israel.

What happened to all the talk about focusing on China and India, on Southeast Asia, on domestic issues. Or the talk about a “loss of interest” in the Middle East, in general, and Israel-Palestine, in particular?

Obama’s speech intensified the nervousness of Israel’s right wing, which is organizing to confront Netanyahu. In October, a first conference will be held in Tel Aviv of all the political and non-political movements opposed to negotiations with the Palestinians. Knesset members and deputy ministers from the Likud Party will be invited as well as right-wing ministers from the ruling coalition. Netanyahu has a state that will accompany him toward peace with the Palestinians, but he does not have a party.

The speech by Palestinian President Mahmoud Abbas (Abu Mazen) was second in importance. Much diplomatic effort was invested in Abu Mazen by many parties to ensure a moderate speech signaling a measure of hope and reconciliation, devoid of the sharp attacks on Israel of the kind he made in previous UN speeches.

The result was lukewarm. The most significant remark by the Palestinian leader was a reiteration of his unequivocal and sweeping opposition to an interim arrangement. Anyone familiar with the ins and outs of the negotiations, with the stands of the sides and the political situation, knows there is no chance of reaching a permanent arrangement.

The only chance lies in the possibility of reverting at some stage to an alternative plan, a type of fallback position, prepared in advance, in which the sides would have to satisfy themselves with the establishment of a Palestinian state within temporary borders. The world would call this a “staged permanent arrangement,” the Palestinians would receive international guarantees, they would join the United Nations and the flames would die down. US officials have already confirmed, in private conversations, that such a possibility existed and that it depended on both sides.

Abu Mazen comes and takes us down the tree. If it were up to him, it would not happen. This, at least, is what he says at this point. A great deal of pressure will be required, many temptations and threats, to drag him nonetheless into a move which, for now, constitutes the only game option that will prevent an explosion.

The speech by Iran’s President Hassan Rouhani was expected. His personal charm offensive worked. Eight years of former Iranian President Mahmoud Ahmadinejad created a yearning in the West for a kind of normalcy on the part of Iran. The shoes of the former Iranian president are so small and tight that Rouhani was not required to do anything other than behave like a normal human being and smile occasionally. In interviews, which he handed out like candies to the media in New York, Rouhani stated that the nuclear issue can be speedily resolved, an arrangement can be reached within three months and the sky is the limit.

At one of his appearances he threw out — as a by-the-way — the explosive sentence that defines his future agenda: He called on Israel to join the Nuclear Non-Proliferation Treaty. This is a powerful land mine, which arouses horror and deep concern in Israel. The attempt to equate the burgeoning Iranian nuclear program with the ambiguous Israeli program can send Netanyahu’s blood pressure rocketing from zero to 200 within seconds.

Israel has clear understandings with the United States on this issue. “We know and believe the Americans will know how to get Rouhani down from that tree,” a knowledgeable Israeli diplomatic official in Jerusalem told me this week. “Any attempt to place Iran face to face with Israel in this affair is destined to fail. The reality is different, the facts are different and Prime Minister Netanyahu will present some of them in his speech next week.”

Netanyahu’s problem will be that he is swimming against the current, that like a desperate salmon he is trying to swim upstream. Now is the time for politics and diplomacy, and it is a pity Netanyahu does not understand and refuses to go along. One cannot cry “wolf” forever. Sometimes, one has to give other options a chance.

In this regard, the dispute that was exposed here last week between Netanyahu and Finance Minister Yair Lapid picked up steam this week. When Netanyahu instructed the Israeli delegation at the UN to walk out during Rouhani’s speech, Lapid issued an immediate statement saying he viewed this as a mistake. Lapid thinks Israel should put out its hand to Iran — and let the Iranians turn their backs.