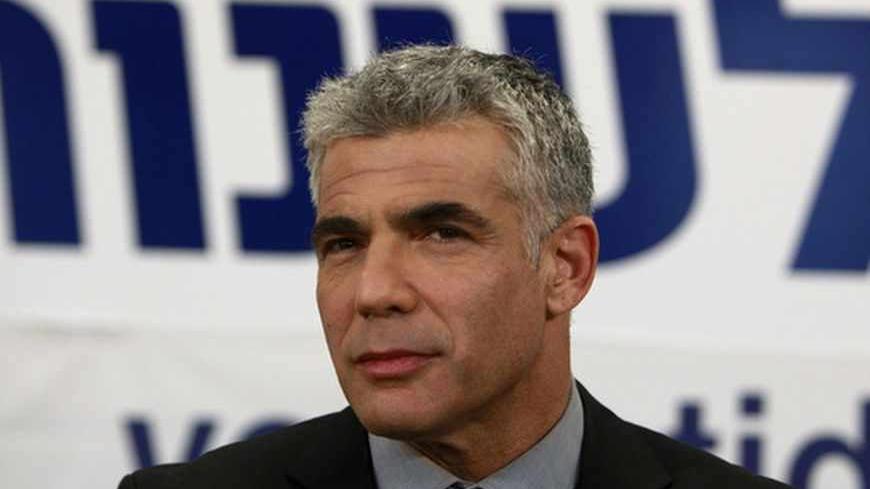 Several hours after the Cabinet meeting on Sept. 15, at which Prime Minister Benjamin Netanyahu laid out the four conditions which the international community must set before it lifts the sanctions and eases the international pressure on Iran, his finance minister, Yair Lapid, gave a rare interview on diplomatic issues to CNN’s Christiane Amanpour.

In contrast to Netanyahu’s hard-line approach, which regards the overtures of peace from Tehran as an illusion at best or a clever Iranian deception tactic at worst, Lapid’s tone was different: “I’m happy to listen to any new music coming from Iran, but this has to be backed by not only words, but also by deeds.”

In response to Amanpour’s follow-up questions, Lapid adopted a harder tone, saying that “When the reactor in Qom is closed, when they stop enriching uranium … then we can discuss whether we can all hold hands and sing hallelujah together.

“We have to wait and see what happens with [Iranian President Hassan] Rouhani. Since he won the elections, they have installed 7,000 new centrifuges. Of course I’d rather have people tweeting me 'happy Rosh Hashanah' or 'happy New Year' instead of tweeting that they are Holocaust deniers, as it was before. Is this the real thing? Too soon to tell.”

Despite his outspoken skepticism, Lapid’s remarks are a welcome departure from the way senior Israelis express themselves about events in Iran and the expectations of Rouhani’s new regime. Lapid was a prominent Israeli journalist until recently. He burst onto the political stage and after a meteoric rise, was named Netanyahu’s finance minister. He is one of only four government ministers in Israel’s most secret decision-making forum, privy to all the material and takes part in all the deliberations. Unlike Netanyahu, a born pessimist and professional nay-sayer, Lapid is young, optimistic and brimming with vitality. He is not President Shimon Peres, whose mood can survive the even worst news. He is perhaps somewhere in the middle between Peres and Netanyahu.

In recent months, since the cabinet was installed, Lapid’s popularity has been plummeting (after he imposed budget cuts and tax hikes on his constituents); his public embrace with Netanyahu has caused him great damage and perhaps this is why his rhetoric on Iran was less harsh and more optimistic — it could be a way to extricate himself from the embrace and distinguish himself from Netanyahu.

In any case, the expression “new music” from Iran is a rare note for an Israeli leader to sound.

Three hours earlier, Benjamin Netanyahu started off the weekly cabinet meeting by presenting the four demands that must be put to Iran as conditions for an easing of sanctions: a complete halt to uranium enrichment, removal of the enriched uranium from Iran, a shutdown of the facility at Qom and an end to the plutonium program.

By the way, Netanyahu did not differentiate in his remarks between low-grade enrichment of uranium and the next stage, enrichment to a level of 20%, considered military grade. He may have preferred to cloud the issue deliberately.

Lapid, in comparison, cut down the list of conditions to only two, perhaps to make it easier for the CNN interviewer, perhaps to rile Netanyahu a bit and set himself apart or perhaps unintentionally. Lapid has many unintentional moments. When he was a columnist, it was forgivable. Now that he's a politician, it’s unpleasant.

Rouhani himself gave an interview to NBC a few days after the remarks made by Netanyahu and Lapid accusing Israel of having "war-mongering policies." When asked about his predecessor Mahmoud Ahmadinajad’s denial of the Holocaust, he replied: “I’m not a historian, I’m a politician.”

By so doing, Rouhani contributed to the interim outcome of the public debate in Israel: Iran is the same Iran, even after Ahmadinajad. The difference lies in nuance and meaningless gestures. This is the case until proven otherwise. This is Israel’s official view.

There is, by the way, a minority opinion. At this point, it’s held only by professional iconoclasts and sworn optimists. There are some who compare Rouhani to former Soviet Union President Mikhail Gorbachev. He, too, did not intend to bring down the Soviet empire which he was appointed to lead, they say. He, too, was surrounded by a terrifying communist system that did not want to consider compromising. But he understood and recognized reality, and went along.

President Peres likes to say that “Reality runs our life. We don’t run reality.” Rouhani, say those in the minority, is not a Reformist by nature, but he was nonetheless picked for the job by Reformists and he may understand the momentous opportunity and pick up the gauntlet.

On the issue of Syria, Israel’s position is a little less confused. More and more senior officials sound indifferent when asked what they prefer for Syria: Syrian President Bashar al-Assad’s downfall and disappearance, or a victory and his staying in power.

Knesset member and former Foreign Minister Avigdor Liberman was heard to say in private conversations this week that “Both situations are equally bad,” a vague yet decisive statement.

Until recently, the official Israeli position was sweeping support for the overthrow of Assad’s regime. Today it’s neither decisive nor sweeping. Decision makers in Jerusalem and intelligence gatherers in Tel Aviv have been losing sleep over reports indicating that at least half the rebels in Syria are members of al-Qaeda and the global jihad.

Israel supported the US-Russian deal on Assad, there are even claims that Israel encouraged the deal and perhaps even invented it (although this is strongly denied in Jerusalem). As of now, an Assad devoid of chemical weapons is the preferred choice for many in Israel. And this is a significant change from the previous assessment.

The bottom line is that the Middle East is experiencing an interesting U-turn. Up until a few weeks ago, the sounds heard were mostly of the drums of war. The sanctions on Iran were getting stricter, the military option was becoming more and more concrete while in Syria the war was raging and the United States announced, semiofficially, that it was readying for a military blow to Assad’s regime following his use of poison gas.

This week we awoke to a new reality. The strike on Syria has been removed from the agenda at this stage. A diplomatic arrangement has been reached which might lead to a comprehensive diplomatic move. Rouhani and US President Barack Obama are exchanging letters, the Americans aren’t ruling out a meeting and the Iranians are speaking in moderate tones and are willing to deal on the nuclear issue. In other words, there’s light at the end of this dark tunnel. As the cliché goes, this may be the start of a new dawn, or it may be a heavy nuclear engine bearing down on us. At some point we’ll discover which.