It isn't clear how long the alliance between Yesh Atid head Yair Lapid and HaBayit HaYehudi leader Naftali Bennett will last, writes Ben Caspit, but the alliance is already changing the face of Israeli politics. 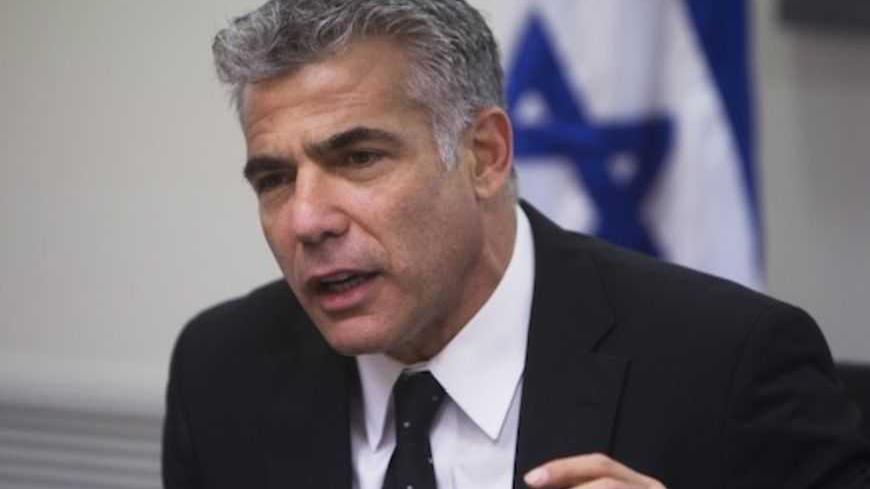 “The Start of a New Beginning” — that was the election slogan of Naftali Bennett’s HaBayit HaYehudi party. “We’ve Come to Make a Change” was the slogan of Yair Lapid’s Yesh Atid party. It’s a well-known fact that in most cases, election slogans have a very brief life. They get tossed onto the political trash heap the day after the voting is over.

But this time, things worked out differently. These two slogans are being put into practice right before our eyes. The alliance between Lapid and Bennett is, without question, new and totally different. It's something we’ve never seen before. At the moment it appears this alliance is changing the face of Israeli politics, by giving it a good shake-up. It remains to be seen whether it will last, how long it will last and what kind of term Prime Minister Benjamin Netanyahu — who emerged from the elections battered and humiliated — has in store. The one thing that is clear, however, is that Israel has never had anything like this before.

Lapid and Bennett are actually very similar, but at the same time, they’re very different. Lapid's in his late forties; Bennett is in his early forties. Lapid is a symbol of the deep-rooted secular Israel of yesteryear, which the country’s founders dreamed of creating. Bennett may have been born in Israel, but his parents came here from California, bringing with them an Anglo-Saxon background and an entirely different cultural legacy. Lapid is avowedly secular; Bennet is religious, he wears a crocheted kippah (the symbol of Zionist Modern-Orthodox Judaism). His parents became Orthodox when he was a baby. Bennett was a combat soldier and served as an officer in the Matkal commando unit. Lapid spent his military service as a journalist for the IDF’s Bamahane magazine. Lapid is a political moderate and pragmatist, and he believes in a two-state solution and is willing to give up most of the Territories in exchange for peace. Bennett certainly is not. He believes that it is impossible to create a Palestinian state, and that there's simply no room for two states in the crowded neighborhood between the Jordan River and the Sea.

In theory at least, these two men should be sitting across the political aisle from each other. In reality, they are locked so tightly in their embrace that they could be mistaken for twins, separated at birth. Those things that they have in common are no less formidable than the things that divide them. Both men believe that any differences they have are considerably less urgent, and aren't on the list of chores to deal with immediately. Since Lapid doesn’t believe that there is a real Palestinian partner for peace, there’s no reason to argue over the permanent borders right now. Since even Bennett realizes that it would be impossible to annex “Area C” right now, there’s no reason to argue about it.

These are two young men who took a good, long look at politics from afar and from up close — and were disgusted by what they saw. Lapid saw what happened when his father won fifteen seats with the Shinui party, only to suffer the excruciating disappointment of being knocked down by politicians more experienced and underhanded. Bennett picked up his disgust during the rash and acrimonious time he served as Netanyahu’s chief of staff. He got fed up with the “deceptions and deceits” that prevailed in Israel’s rotting corridors of power.

The seeds of animosity were sown in both of these men against what the politicians of the past represented — politicians who clung to their cabinet seats no matter the cost, acting in their own self-interest, rather than the interests of the country. Lapid and Bennett may have many differences, but they are both motivated by that same spirit. They want to shake up Israeli politics from the inside. Lapid may disagree with Bennett, but he has no doubt that Bennet is motivated by love for Israel, and vice versa.

The alliance was inspired by Netanyahu. More precisely, the real instigator of this alliance is none other than first lady Sara Netanyahu. The intense personal enmity she acquired for Bennett and for HaBayit HaYehudi Knesset member Ayelet Shaked, who was once Netanyahu’s senior secretary, forced her husband to target Bennett even before he took over the HaBayit HaYehudi party. Netanyahu began fighting with Bennett even before the primaries.

It later became obvious that Bennett wouldn’t be part of any future coalition: Netanyahu never counted him in, he never spoke to him and he never recognized his presence. That left Bennett with no other choice. He knew that if he was to join the coalition, he’d have to be creative. That’s how he came across Lapid.

Lapid’s story is different. He knew that his career would be over if he sat in a coalition with ultra-Orthodox Party Shas Knesset Members Aryeh Deri and Eli Yishai. He may not be launching the same furious attacks against the ultra-Orthodox as his father once did, but his calling card is “sharing the burden.” After the elections, he did exactly what he promised before the elections. That in itself is a refreshing change.

Lapid knew that as long as Netanyahu has an alternative, he wouldn't violate his historic alliance with the ultra-Orthodox. He would keep them in the government no matter what it costs. The real issue was to make sure that Netanyahu had no alternative.

And so these two men were propelled into each other’s arms. They had first met a few years earlier on a series of tours of the West Bank, arranged by the Judea and Samaria Regional Council for Israeli celebrities and opinion-makers. The tours' purpose was to show these those living in the Tel Aviv bubble that the settlers aren’t what they imagined — a bunch of monsters dashing from hilltop to hilltop, spitting out fire while they gobble up Arabs. The purpose of these tours was to create a human connection between settlers and celebrities.

I don't know how many Tel Aviv bigwigs were influenced by the project, conceived by Bennett when he was the general manager of that regional council. But it certainly changed the mind of one of them. Yair Lapid was a popular journalist for the Yedioth Ahronoth newspaper when he took a private tour of the region with Bennett. The chemistry between them was instantaneous; they even developed a friendship of sorts.

They met again on the eve of the elections and realized that this really could be the start of something new. They forged an alliance. Nothing was ever written down. There is no documentation. But it is no less powerful. These two men gave each other their word that they would not enter any coalition without the other. They would only join the government together. As of now Lapid and Bennett constitute a bloc with 31 Knesset seats. Let’s watch Netanyahu try to exclude them.

People initially may have mocked them: “Okay, fine. So what if they made a promise to each other. When the time is right, one of them will through the other to the dogs. That much is obvious. That’s what happens in Israeli politics every Monday and Thursday.” Well, that didn’t happen this time. The alliance persevered. The die was cast as soon as Shaul Mofaz joined their bloc. Since Lapid stated explicitly that he would not join a coalition with the ultra-Orthodox, Netanyahu couldn’t put together any other government.

As usual, the only person that the prime minister could blame was himself. He was the great strategist of his own demise. Whenever former Prime Minister Ariel Sharon’s staff expressed concern about one or another of Netanyahu’s schemes, Sharon responded with his epic assertion: “Don’t you worry about Bibi. Bibi will take care of it himself.” Sharon has been proved right again.

Barring any last minute problems, if a Netanyahu-Lapid-Bennett government is formed, with the addition of HaTenua leader Tzipi Livni and Kadima chair Shaul Mofaz, what are the chances of renewing the peace negotiations in the region? That remains to be seen.

Lapid’s has a simple platform regarding peace agreements: right now, there's no way to work toward a permanent solution. The Palestinians simply aren’t ready for it. The split between Gaza and the West Bank appears to be a matter of fact; instead of another failed peace process, it is better to work toward an interim agreement. Lapid supports an Israeli declaration in favor of the Arab initiative (with express reservations regarding the refugees), the symbolic transfer of territory to the Palestinian Authority (which would not include the evacuation of settlements) and the establishment of a Palestinian state with temporary borders, accompanied by large-scale international development and aid. At the same time, negotiations would be launched to reach a permanent agreement in the future. If the Palestinians want international guarantees that the permanent agreement will not be abandoned, and that it will be based on familiar parameters like the 1967 borders, let them ask the Americans for those guarantees. Israel doesn't oppose that. This plan is based on the one put forth by Shaul Mofaz, and other ideas raised in Israel over the past few years. When it comes to diplomatic negotiations, the two biggest influences on Lapid are former Prime Minister Ehud Olmert and former Mossad chief Meir Dagan.

What will Bennett do? His red line is evacuating settlements. Nothing will upset him until that happens. Livni and former Palestinian Prime Minister Abu Alaa can talk around the clock as far as he is concerned. Bennett knows it's next to impossible for them to actually reach and sign an agreement. He will ask for the freedom to vote according to his conscience in the Knesset in the event that a peace agreement is reached, but until then, he has no problem with the two parties negotiating.

The question is what will happen if there is a demand to freeze construction in the settlements or to evacuate outposts. Bennett opposes a freeze on construction. As for the evacuation of outposts, that is casus belli as far as he is concerned. It is a very clear line in the sand — and the biggest potential obstacle. While it is possible that Bennett would agree to a partial freeze, it would be limited to construction across the Separation Fence. Under no circumstances would he consent to any evacuations.

It remains to be seen where all this will lead, if anywhere. On the other hand, as Bennett likes to say behind closed doors, “You can always depend on the Palestinians. They are just like Netanyahu. They’ll take care of it themselves. They’ll torpedo any hint of progress in the diplomatic negotiations.”

That’s why Bennett really isn’t worried. He just wants to be sworn in as Israel’s finance minister within the next week or so. For now, he’ll make do with the fact that this will leave Netanyahu with a bad stomach ache. We’ll see what happens after that.