Yesh Atid leader Yair Lapid may head Israel’s second-largest party, but it is HaBayit HaYehudi chairman Naftali Bennett who actually holds the ''keys to the coalition kingdom'' in his pocket, writes Mazal Mualem. 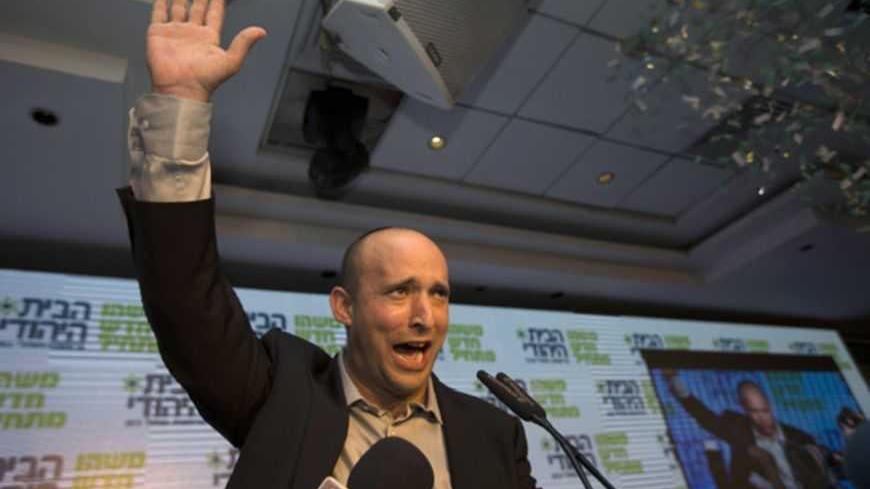 Prime Minister Benjamin Netanyahu did all that he could during the recent coalition negotiations to keep HaBayit HaYehudi Chairman Naftali Bennett out of his new government. [By the time those negotiations ended], it was apparent that he had failed. Actually the situation is even worse than that. Not only had [Prime Minister Netanyahu] Bibi failed to exclude Bennett from his government. He made Bennett the most powerful person in it. As of now, Bennett is the one person who can decide how long this new government will last. In effect, Bennett can actually determine Netanyahu’s political destiny.

While it is true that Yesh Atid leader Yair Lapid heads the second-largest political party in Israel, Bennett has more room to maneuver. The reason for this is simple. He has much greater flexibility. He can dismantle that glorious alliance he made with Lapid whenever he wants. This, in turn, would allow Netanyahu to finally fulfill his dream and bring his “wayward sons,” the ultra-Orthodox, back into the fold. Any such overtures to the ultra-Orthodox would lead to Yesh Atid’s automatic withdrawal from the government.

Lapid doesn’t have the same flexibility. His hands are tied because of his inviolable strategic decision never to sit in the same government as the ultra-Orthodox. In that sense, he is completely dependent on Bennett.

Even before Netanyahu’s third government is sworn in, Bennett has established himself as the central hub around which it will revolve. He extricated the coalition negotiations from a major crisis, after Lapid threatened to join the opposition if his party didn’t get the Education portfolio. By finding a solution, Bennett allowed the Netanyahu family to keep their home on Balfour Street (the official residence of the prime minister in Jerusalem). It’s as simple as that.

But Bennett also showed his flexibility when he destroyed the old “theory of rival blocs” (pitting left against right), by proving that when it comes to “sharing the burden” (by recruiting the ultra-Orthodox into the IDF), he was not aligned with the right after all. By doing that, he reshuffled the deck.

At age forty-one, Bennett is starting his public career in politics armed with enormous assets, which should help him carry out the economic and social reforms he campaigned on. As Minister of Industry, Trade, and Labor, and as the person who will control the Finance Committee and the ministry of religious services, he will have all the right conditions to fulfill at least some of his programs. The fact that “his brother” Yair Lapid holds the finance portfolio only increases his capacity to force big moves on Netanyahu.

Despite the stereotypical expectations of a man in a knitted yarmulke [nationalist-orthodox] who holds right-wing political views, Bennett has no intention of spending his time in the Knesset as a “lobbyist” for the settlers. His top priorities are sharing the burden, the housing crisis, and the Centralization Law (which is intended to reduce the grip that major corporations have on the economy and increase competition).

A few weeks ago, Bennett also managed to convince Lapid to adopt his outline for sharing the burden. The proposal, which is based on the “Plesner Plan,” would draft the ultra-Orthodox into the IDF and impose sanctions on draft dodgers. This is especially embarrassing for Netanyahu, who scuttled the same plan a few months ago, as soon as it appeared on his desk. Netanyahu fought to preserve his alliance with the ultra-Orthodox, even though this ultimately led to the resignation of Kadima leader Shaul Mofaz from his government. Mofaz, who headed the ''large Kadima,'' had joined forces with Netanyahu for the sole purpose of advancing this program.

In other words, Netanyahu already missed his opportunity to bring about historic change. Now, in these troubled times, with Bennett and Lapid insisting that the outline is a precondition for them to join the coalition, he is prepared to surrender without a fight, even if it means abandoning his ultra-Orthodox allies.

Under pressure from this aggressive alliance of “the young and the bold,” Netanyahu has become susceptible and vulnerable, especially to Bennett. Susceptibility and vulnerability are aspects of Netanyahu’s personality that only get worse in times of crisis. The chairman of HaBayit HaYehudi was well aware of this particular weakness, and played it for all it was worth. He was absolutely certain that Netanyahu would not risk presenting them with an ultimatum, like former Prime Minister Ariel Sharon would undoubtedly have done in similar circumstances. Bennett saw how all of the prime minister’s efforts to spin the story came crashing down even before they took off, and he realized that Netanyahu had long lost control of the process.

This was confirmed by someone close to Bennett, who said, “Naftali knows Bibi’s weak spots, but even he couldn’t believe how quickly Bibi folded. He didn’t actually want to ‘kill him’ for tactical reasons, because he realized that in the end, they will have to work together.” By the way, this is also what lay behind Bennett and Lapid’s decision to waive the title of deputy prime minister. Netanyahu himself called them on Friday morning to ask them to forego the titles. As magnanimous victors, they agreed.

With utter confidence and sophistication, Bennett led Lapid and Netanyahu to a compromise, which paved the way to a new government. By racing back and forth one night between Lapid’s home in Tel Aviv and Netanyahu’s office in Jerusalem, Bennett managed to resolve the crisis over who would be Minister of Education, which threatened to blow up the coalition agreement. He supported Lapid’s refusal to compromise over the cabinet position, but at the same time, he also set boundaries, and in so doing he consolidated his position as the person who decides how high the fire will be allowed to rage in the next government. He can turn the flames up, but he can also turn them down, at his discretion.

What makes this situation especially ironic is the fact that Netanyahu and his wife, Sara, loathed Bennett more than anyone over the past few years, but he is ultimately the one who rescued Bibi from a political nightmare and the potential loss of his job. Instead Bennett gave Bibi the chance to go to the President’s House to announce the formation of a new government.

The Netanyahus have had plenty of feuds and accumulated plenty of enemies during Bibi’s political career, but the conflict with Bennett was the most bitter. Sara Netanyahu regards her husband’s former chief of staff as the man who tried to soil her reputation by leaking stories to the press, and who slammed the door on his way out, when he finally left his position. Worst of all, Bennett never tried to mend fences or apologize throughout the entire election campaign. Instead he made matters worse by joking at her expense on at least two talk shows.

Netanyahu and his inner circle have had many harsh things to say about Bennett. They called him a “fiasco” and a “failed chief of staff”; they described him as having “a problematic personality” and as being “megalomaniacal and treacherous.” But faced with the real possibility of losing control over the government, Netanyahu spent the last few days clinging to Bennett as tightly as possible. This was apparent over the past three days of the coalition crisis, when Netanyahu and Bennett spoke by phone and met far more frequently than usual.

Bennett provided Netanyahu with the goods, but he also acted as a lifesaver to Lapid by extracting him from his stern ultimatum: “Either the Ministry of Education or we’re joining the opposition.” We can see the result right in front of us. It was just a year ago that Netanyahu was crowned, “King Bibi,” but he is now being controlled by two inexperienced young men, who happen to be more popular than him. What makes it all the worse is the fact that he himself granted one of them —his sworn enemy at that — control over his political destiny.