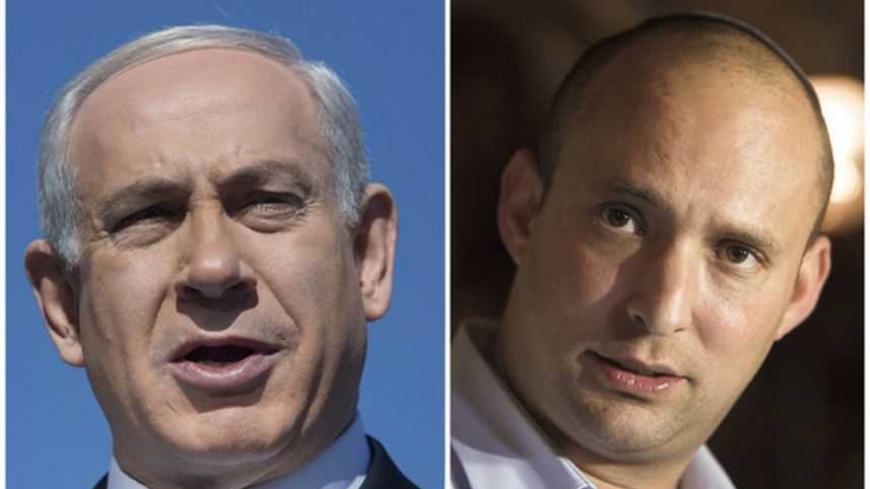 Former Israeli Prime Minister Ariel Sharon had a significant role in evoking Prime Minister Benjamin Netanyahu's image as the Israeli politician who is most likely to cave in under pressure. For years, he used to portray him as panicky, using very graphic descriptions about the beads of sweat rolling down his face whenever he came across complex and stressful situations. "Don't touch Bibi, he'll ruin it for himself," Sharon derisively remarked about his Likud Party opponent, oftentimes being in the right.

For years such tales haunted Netanyahu until they dissipated. This is perhaps owing to the fact that Sharon and his associates are no longer in the loop and cannot continue fueling the image. Yet in recent days, Yair Lapid and Naftali Bennett — who serve as chairpersons of the Yesh Atid and HaBayit HaYehudi parties respectively — have made Netanyahu run the gauntlet, Sharon style, as part of an orchestrated move to apply pressure to Netanyahu, throw a wrench in the alliance with the ultra-Orthodox, and get both of them into his coalition. This coalition negotiation tactic is predicated on the assumption that Netanyahu will be made to believe that their alliance is unbreakable.

Even when Netanyahu played the first hand in this poker game, clinching a deal with Tzipi Livni, the chairperson of HaTenua Party, Lapid and Bennett didn't bat an eye. Netanyahu discovered that the bond between the two men has only been strengthened.

Lapid and Bennett are playing for the jackpot, but so is Netanyahu, who — for the time being — shows no signs of breaking down. He goes to great lengths, sparing no effort to get the Labor Party into his coalition, leaving the smug Lapid and Bennett duo in the opposition.

Who will blink first? This is the million-dollar question riveting the political establishment at this juncture. Bennett and Lapid are surrounded by people who are intimately familiar with what makes Netanyahu tick, including situations he finds intimidating. Bennett himself was Netanyahu's chief of staff when he served as chairman of the opposition. The same goes for Knesset Member Ayelet Shaked from the HaBayit HaYehudi party, who was his office manager during those years.

In addition to her, there are other figures working alongside Bennett, such as Eyal Gabai, who until a year ago served as the director-general of the Prime Minister's Office and now oversees the coalition negotiations on Bennett's behalf, and Shalom Shlomo, who was Netanyahu's senior political advisor. This bunch is sure that Netanyahu will feel pressured and be the first to snap — because he will be made to believe that he is about to lose the premiership. The four have already seen from up close — even under less stressful situations — how paranoia takes over Netanyahu's decision-making process.

On the other side of the barricade, in Lapid's camp, Uri Shani also believes that Netanyahu will feel pressured. Shani, who used to be Ariel Sharon's chief of staff and currently oversees the coalition negotiations on Lapid's behalf, can pen out voluminous books on all the spins that were doctored by Sharon's office to make Netanyahu break into a sweat.

Lapid and Bennett are not interested in going for re-elections. They want to get into Netanyahu's government. They would have already done so had Netanyahu not made them join forces in a strong alliance — an "alliance of steel" as their own people termed it. For his part, Netanyahu was not alert enough to understand the potential damage that this young political duo can inflict. He could have closed a deal with Bennett during the election campaign, or at least have brought him closer right thereafter when Bennett already pocketed 12 Knesset seats.

Instead, Netanyahu — acting out of a personal vendetta that is largely to do with the family feud — dismissed his former bureau chief and humiliated him.

Bennett was left with few options, which is why he played right into Lapid's hands. It was not before long that he realized that they clicked and that they even have a common agenda: equal sharing of the burden, caring for the middle class, and above all: Neither one wants to see the ultra-Orthodox in the government.

Since the elections, Lapid and Bennett have been increasingly more coordinated. Consequently, the strategy of building up pressure on Netanyahu gathers momentum. Ultimately, it should prompt him to forsake the ultra-Orthodox and choose them in their stead.

Today's [21 Feb.] headlines, in which Bennett is quoted to have said that his alliance with Lapid is made of "steel" and that he would rather go for re-elections than join Netanyahu's government without him, are but one example of the extent of the coordination between the rising star from the centrist-left party and the rising star from the right-wing party — down to the last detail.