The ultra-Orthodox leaders cry out in public against the new law requiring their enlistment in the army, but behind the scenes, they're discretely satisfied. 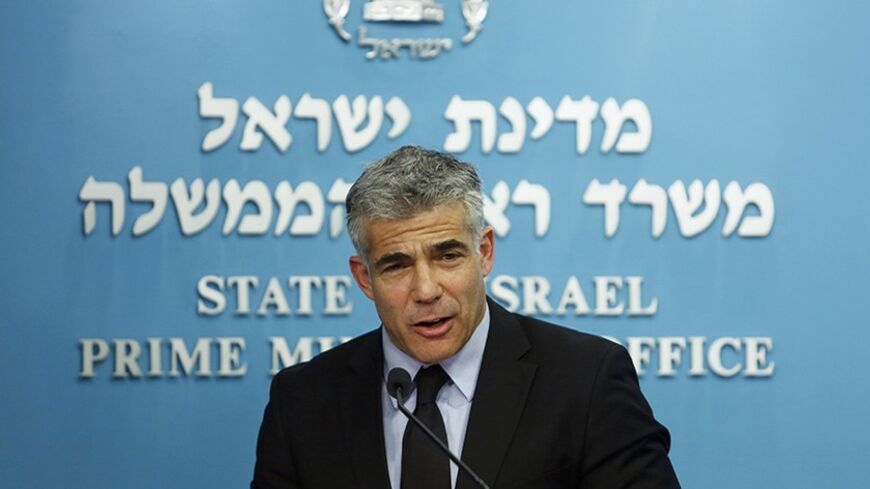 The day after Finance Minister Yair Lapid’s declaration of victory on Feb. 20, in the battle over the burden-sharing law, the ultra-Orthodox leadership also rushed to play its part in the play produced by the Yesh Atid chairman. The cries of pain of the ultra-Orthodox rabbis and the harsh threats of revenge on Prime Minister Benjamin Netanyahu from Knesset member Meir Porush of Yahadut HaTorah, published in Israeli daily Yedioth Ahronoth, are no more than crocodile tears.

The just passed burden-sharing law is a major victory for the ultra-Orthodox, whose lives won’t change — in contrast to the misrepresentation by the leaders of Yesh Atid. But the representatives of the ultra-Orthodox sector have no interest in raising doubts as to Lapid’s supposed victory, or claim that they succeeded in defeated the draft while sitting in the opposition. Because it doesn’t matter with what pomposity Lapid announces the correction of a historic wrong that has lasted 65 years. The truth is that Israeli citizens went to sleep with the “draft reform” and woke up with a modified Tal Law exempting the ultra-Orthodox from being drafted — that is, one with a slightly improved status quo.

In his election campaign, Lapid promised to draft every 18-year-old male. In reality, he’s assisting the continuation of mass draft dodging under cover of the law. There will be no shared burden as long as the ultra-Orthodox are excluded from the Defense Service Law — this is the situation today and that’s how it will remain.

The debates of the Plesner Committee, the committee that previously tried to advance legislation for a shared burden, blew up in July 2012, and with it the short partnership of Netanyahu and the Kadima party, headed by former Defense Minister Shaul Mofaz. At that time, the ultra-Orthodox conducted an all-out war over two issues raised in the discussion: the age of the draftees and draft quotas. They wanted the age of the draftees to set as high as possible, and fought for predetermined draft quotas rather than a general draft. Netanyahu preferred to keep his pact with the ultra-Orthodox and disbanded the committee. The ultra-Orthodox achieved these two goals with the new law: They will be able to receive a deferment of service and study in a rabbinical college until age 26, and in exchange, they’ll have to meet the draft quotas determined by the government.

In addition, the government will be the one to monitor the quotas and to determine the draft goals. There’s no need to mention the flexibility of government decisions and the speed in which they can be changed according to political and coalition constraints. Thus, it’s easy to understand why the main achievement heralded by Yesh Atid — the criminal penalties on ultra-Orthodox who dodge the draft — is illusory. There will not be criminal penalties just as there won’t be economic penalties, since the ultra-Orthodox could easily meet the draft targets in the framework passed into law. Even today, without Lapid’s law, about 3,500 ultra-Orthodox serve in the Israel Defense Forces, 2,000 of them drafted in the last year.

The ultra-Orthodox couldn’t dream of a friendlier law. They see Lapid talking about a historic turning point and chuckle. Quietly and cleverly, through their associates among the settler leadership, they succeeded in pressuring Economy and Trade Minister Naftali Bennett and Knesset member Ayelet Shaked of the right-wing HaBayit HaYehudi party behind the scenes, so that they would represent ultra-Orthodox interests in the committee. Despite the temptation to celebrate the new law and herald their achievement, they understand that now is the time to show restraint and let Lapid have his 15 minutes of fame. The public’s attention will move on to another topic, and they’ll enjoy their win.

One of the senior ultra-Orthodox politicians in close contact with the chair of the committee, Shaked, agreed to speak with Al-Monitor on the condition of anonymity: “We couldn’t have asked for a better law. In the war over public opinion against Lapid, we don’t really care that people would think we lost and we’re going to be drafted. That’s how they’ll get off our backs; that’s how we’ll get our peace and quiet back.” As for Porush’s claim that Netanyahu betrayed the ultra-Orthodox when he agreed to criminal penalties, the senior politician said, “What do you expect, that he’d be happy with it? We have to show that the law is bad for us.”

The threat of Porush that the ultra-Orthodox would punish Netanyahu in the presidential elections and block the Likud’s candidates he described as “part of the game. Just like in the last elections, when we threatened him that we’d endorse [then-Labor chair] Shelly Yachimovich because of the economic sanctions. I see ultra-Orthodox members of the Knesset regularly vilify Bibi [Netanyahu] ever since we didn’t enter the government, but the moment they get called to a meeting with him, they run into his arms and boast that just now, they sat with the prime minister.”

Lapid’s achievement amounts only to the marketing that gave the burden-sharing law a sense of being a historic step forward. The circle surrounding the chairman of Yesh Atid compares him to no less than late Prime Minister Ariel Sharon, who withstood intense pressure on the right on the eve of the passing of the Gaza Disengagement Plan in the Knesset. On the same night in October 2004, Sharon gave an exemplary leadership performance in the Knesset, as he sat cool-headed in the assembly hall, didn’t blink and didn’t give in, despite the fear that he would lose his office. Where exactly is the similarity in these two events? Only the Yesh Atid people can say.

Lapid, maybe more than any other politician, has the unique talent of distilling a complex issue into an exact and winning sentence, and to choose the image of victory that would serve his agenda most precisely. That’s how it was when the government was established: He wished to carve into the collective memory the image of a smaller coalition without the ultra-Orthodox, but on the way he gave up spots on all of the most important committees and other positions of power in the Knesset. That’s how it was this time, as well: He marked his goal as the criminal penalties and threatened to leave the government if they weren’t included, and conceded on essential points in the law.

In the battle over secular consciousness, Lapid won. But very soon, when the fog of war lifts, the facts will become clear. It could be that in several years, when Israeli citizens discover that most of the ultra-Orthodox continue to receive an exemption under the law, that no one goes to jail or is fined, another case will come before the Supreme Court that would shake the political system. But then, after the passing of Yesh Atid’s law, the situation will be much more complicated. That’s what a historic missed opportunity looks like.