Ofer Shelah, chairman of the Yesh Atid Knesset faction, calls on the prime minister to present immediately for voting the ultra-Orthodox draft bill: "This was what half the coalition negotiations, if not more, were about." 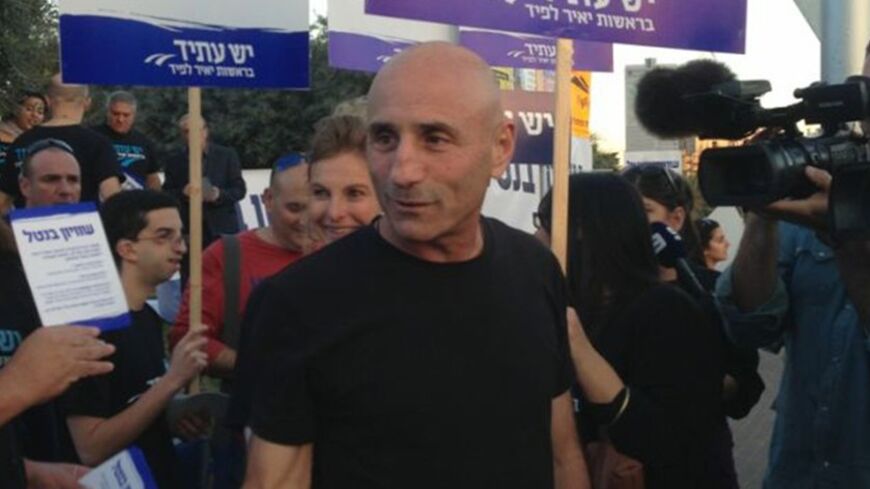 There’s only one thing that’s more obvious than the tension and nervousness among the ultra-Orthodox as the moment of truth draws near in the battle over the bill that would see them drafted into the army — and that is the disappearance of Prime Minister Benjamin Netanyahu from the sparring arena. The echoes of the fundamental High Court ruling two weeks ago on Feb. 4, halting government funding for rabbinical colleges whose students defer their draft, are still resonating, as is the judges’ harsh criticism of the government, but Netanyahu has opted for silence.

“I would have expected to hear from the prime minister that this is the right bill, and that this is the bill that will be voted into law,” Knesset member Ofer Shelah, chairman of the Yesh Atid Knesset faction, told Al-Monitor on Feb. 13. Shelah is the faction’s representative on the Shaked Committee, which, by next month, is supposed to complete legislation of the Equal Sharing of Burden law — Yesh Atid’s flagship issue. The main controversy now is whether the law will include criminal sanctions against ultra-Orthodox men who evade the draft. Yesh Atid is threatening to bolt the coalition unless the law includes such criminal-punitive measures.

“This is a major piece of legislation. This is the issue with which we went to the voters. This was what half the coalition negotiations, if not more, were about, and I would expect the prime minister to announce clearly and straightforwardly, without hemming and hawing, that this is the correct law, as far as he’s concerned; that this is the bill his government put before the Knesset and he expects it to be approved down to its last article. Instead of which, we’re getting quite a few mumblings regarding the question of whether Torah scholars in the State of Israel should or shouldn’t go to prison. This is what I expect of the prime minister.”

There’s only a slim chance that Netanyahu will touch this hot potato with something less than a 10-foot pole, having for years, despite harsh criticism from the Supreme Court, managed to avoid the issue that has clearly damaged his alliance with the ultra-Orthodox. Shelah knows this. For years, he slung his arrows at Netanyahu as a journalist and commentator. In addition, in recent months he learned about the prime minister’s political preferences, up close and personal, when Netanyahu refused to hand the Yesh Atid Party the chair of the Foreign Affairs and Defense Committee after Foreign Minister Avigdor Liberman left the post. Shelah was supposed to replace Liberman, but found out that Netanyahu planned to hand the prestigious committee to his Likud associate, Knesset member Tzahi Hanegbi. This dispute has yet to be resolved, and in an unprecedented void, the Foreign Affairs and Defense Committee has been without a permanent chairman for months.

Last Thursday afternoon, about an hour before he left for Tel Aviv to demonstrate in favor of the Shared Burden legislation with party activists and his friend and party chairman, Finance Minister Yair Lapid, Shelah radiated optimism in an interview with Al-Monitor. He has a hard time imaging a scenario in which the Knesset fails to complete the legislation by March 12. He says that on this coming Monday, Feb. 17, the Shaked Committee will conduct several crucial votes on core articles of the bill, in advance of its approval by the Knesset plenary.

Al-Monitor: What is the likelihood that the bill will set off a coalition crisis?

Al-Monitor: Are Habayit HaYehudi Party and Knesset member Ayelet Shaked really on your side, or are they just pretending to be?

Shelah: I coordinate with Ayelet Shaked, and I’m under the impression that she wants this to succeed. They want to have this law, and I say frankly that it’s clear to me they are under quite a lot of pressure, but in the end, they want this law. In my view, the decision has been made. The committee will not entertain a proposal that doesn’t include a mandatory draft, eventually. The debate is about the details. We couldn’t have achieved an equal sharing of the burden in a government with the ultra-Orthodox parties. That’s totally clear. This combination has aspects I like, some more, some less, but to approve the equal burden bill there’s no doubt that this is the only possible government.

Al-Monitor: Why are you insisting on criminal sanctions? It looks like you want to deliberately hurt the ultra-Orthodox. What’s wrong with economic sanctions?

Shelah: I don’t like the term “criminal sanctions.” And there’s something very simple: We give the ultra-Orthodox an adjustment period. During this period we say to them, “There are goals and you have to meet them — but sanctions will not be imposed if you don’t meet them.” We can’t have a mandatory draft with the punishment for violating it being a fine. Constitutionally it’s impossible that the penal code will apply to my son, for the sake of argument, and another law will apply for someone else. This will not hold up 15 minutes, constitutionally. It’s a very problematic situation from a legal point of view. It’s even more problematic in a moral and practical sense.

Al-Monitor: But economic sanctions are much more powerful. Also, do you see tens of thousands of ultra-Orthodox going to jail?

Shelah: I contend that you cannot have a situation, ethically speaking, in which we enable people to convert military service for money. Because a secular guy will come along and say: How will you punish him if he doesn’t serve? He won’t get a subsidized mortgage? Then I also want to not serve. At the age of 18, how many of us need a mortgage and subsidized child care? This will be the death knell of equal citizenship. This is why we insist on compulsory enlistment.

Al-Monitor: According to the High Court’s decision two weeks ago, you failed to anchor the ultra-Orthodox draft with a law. It should already have been a done deal. You, too, fell into the political trap.

Shelah: I want a shared burden. I don’t aspire to it being called “the Ofer Shelah Equal Sharing of the Burden Law.” I warned about this during the Shaked Committee hearings that started in August. From the very first discussion, I told them: Friends, you’re forgetting that we no longer have the Tal Bill [which enabled service deferment for the ultra-Orthodox]. There’s no Tal Bill. What we have now is the mandatory conscription law. If we don’t approve legislation during this Knesset session, and I believe we will, the Supreme Court will have no choice but to order the enlistment of all the ultra-Orthodox. For various reasons, which I don’t want to go into, this committee wasted time, and we got to the point where the High Court raised its sword.

Al-Monitor: Aren’t you concerned about a societal crisis if this law passes? You saw the protests of the ultra-Orthodox last week, and this was even before there was a law.

Shelah: This is not what should determine policy. I believe that much depends on the rhetoric of the ultra-Orthodox leaders, both the politicians and the rabbis. We spoke a lot with the rabbis. We went everywhere to talk about it. They know that the ultra-Orthodox public can handle the draft targets we have set. It can. The question of whether it will or will not is in their hands. And if it’s important for them to avoid a fraternal war, then please, let them make sure that the ultra-Orthodox fulfill the quotas we set. In my estimate, the ultra-Orthodox have a real ability at adjusting to realities of life. If the bill doesn’t pass, we will not be in the government. Yair [Lapid] has already announced that if there’s no mandatory conscription law, we’re out. Everyone knows that. Without us, this law would never have happened.