The Israeli High Court halted funding of rabbinical colleges until enlisting obligations of the ultra-Orthodox are defined by law, thus highlighting the failure of Finance Minister Yair Lapid to bring about this change. 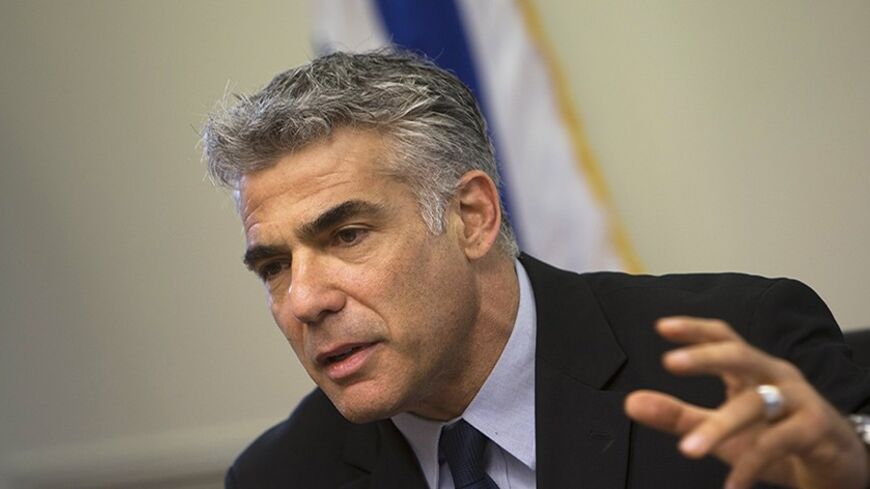 Israel's Finance Minister Yair Lapid gestures as he speaks during a Yesh Atid Party meeting at the Knesset, the Israeli parliament, in Jerusalem, May 20, 2013. - REUTERS/Ronen Zvulun

Finance Minister Yair Lapid announced on Feb. 5 his joy over the High Court of Justice decision to halt the funding transfer to rabbinical colleges whose students had deferred their enlistment to the Israel Defense Forces (IDF). But the truth is, he does not have real cause for celebration.

The High Court astonished the political system and shocked the ultra-Orthodox. As expected, they harshly lambasted the High Court and accused it of ongoing persecution. In the words of Knesset member Moshe Gafni (Yahadut HaTorah), it was a “declaration of war.” The significance of the ruling is the freeze in the transfer of about 10 million shekels [$2.8 million] to the rabbinical colleges. In their dramatic decision, the justices clarified that they were forced to adopt this extreme measure due to the government and the Knesset's continuing to ignore the court’s verdict of nearly two years ago on Feb. 21, 2012, in which it demanded that ultra-Orthodox conscription must be immediately regularized by law.

Lapid, more than any other government minister, bears special responsibility to bring an end to this saga because the ultra-Orthodox draft issue was one of his main election promises. The “fraternal alliance” he created with HaBayit HaYehudi Chairman Naftali Bennett, leaving the ultra-Orthodox outside the government, was supposed to create an historic, one-time opportunity to put an end to ultra-Orthodox draft-dodging. Lapid and Bennett agreed in advance to disagree on the diplomatic front, but promised to cooperate on reforms and substantive changes for the welfare of the Zionist middle class. The burden-sharing issue was a crucial linchpin in this deal.

Before they joined the government, Lapid and Bennett came to agreements regarding the guidelines of the burden-sharing law, and even made it a precondition for joining Netanyahu’s government. If there was any justification for the unnatural alliance between Yesh Atid and HaBayit HaYehudi, it was their joint agenda regarding ultra-Orthodox draft. The High Court ruling, which was forced to enter this governmental vacuum created by politicians, served as yet another proof of the failure of the Lapid-Bennett alliance.

During the year that has passed since the establishment of the current government, the burden-sharing bill should have already been presented for its final approval by the Knesset. Instead, the legislation process keeps getting more and more complicated and entangled; disagreements between HaBayit HaYehudi and Yesh Atid delay the completion of the mission. This year, Bennett showed much less fortitude vis-a-vis the ultra-Orthodox and capitulated to pressures for concessions in the version of the law that Yesh Atid tried to legislate. From being a partner to Lapid in an historic step, Bennett became an adversary. Instead of waiting for a wake-up call from the High Court, Lapid should have exerted daily pressure and used his considerable political weight to accelerate the legislation.

The burden-sharing bill was approved in July 2013 in its first reading and landed on the table of Knesset member Ayelet Shaked (HaBayit HaYehudi), who heads the Special Committee for the Equal Sharing of the Burden Bill, for its second reading. It was at this point that things got delayed and complicated, even though Shaked (and others also dealing with the issue) well knew that the High Court was keeping close tabs on the Knesset, and that the legislation had to be completed before the beginning of the current winter session. Valuable time was wasted on internal squabbles. Moreover, it is already clear that the emerging law will be more limited in scope than the original version passed by the Knesset. The sanctions inflicted on the draft-dodgers will be weaker and less effective than Yesh Atid’s original demands.

The voting in the Shaked committee on the law ratification process will begin only next week. Meanwhile, simultaneously with the foot-dragging going on in the Knesset, the High Court was asked to intervene in the issue again due to petitions placed on its table by several organizations which also demanded equal sharing of the military service burden. This time, the High Court justices decided to take action and not restrict themselves to warnings and demands for the politicians to regularize the issue in law.

In interviews Lapid granted this week to the media, he argued that he always understood that the process of law ratification would be very difficult. This same issue has felled many coalitions and destroyed many political careers in the past. Lapid also said, “It’s a shame that the High Court has to ‘remind’ the state that it must carry out its laws.” Lapid was right, but it seems that he has forgotten that now, he is the state. And that is the reason that we should not be easy on Yesh Atid or allow it the excuse of “extenuating circumstances” due to coalition difficulties. The burden-sharing campaign is what transformed Yesh Atid and Yair Lapid into the true stars of the last elections. Lapid succeeded in convincing the public that he committed himself, first and foremost, to correct this distortion. Thus he must fight by all means, including by threatening to leave the government, to solve the issue once and for all.

Against this background, there is no cause for celebration over the High Court verdict. While the verdict does serve as a tail wind for Yesh Atid regarding the final straight of legislation of the law, the significance is clear: a reprimand to a government that continues to drag its feet, to a prime minister who would be happy to avoid dealing with this hot potato and, finally, to the finance minister.