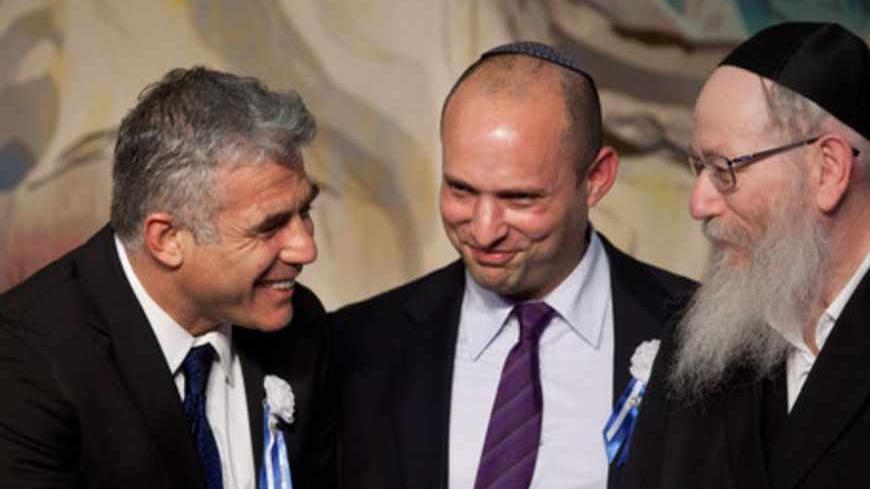 The new bill ending exemption from military service for Israel’s ultra-Orthodox Jews, approved this week (May 29) by the Perry Committee, was supposed to have been one of the highlights of the new government, which for the first time in years is devoid of ultra-Orthodox representatives. It was supposed to have signaled a new, more egalitarian era in Israeli society. But there was nothing festive about the moment, which left a sour after-taste of political spins and power struggles within the government, in general, and within the ruling Likud party, in particular.

Political pundits rushed instinctively to crown the winners and losers of the coalition government’s first crisis, brought about by finance minister and Yesh Atid party chairman, Yair Lapid, on the road to approval of the military conscription reform. Lapid himself was crowned, rightly so, as the big winner of what is known as the “shared burden” law. He managed to block the downward spiral of his popularity, which kept plummeting in recent weeks with each new budget cut inflicted on Israel’s middle class.

The victory celebration he orchestrated at a news conference he convened once the crisis had passed, under the populist headline “My ultra-Orthodox Brothers,” obfuscated with great skill the inherent problem of the new law: postponement of the mandatory enlistment to the year 2016. Until that time, the ultra-Orthodox will enjoy a transition period during which they will be granted mass draft exemptions under the auspices of the new law. The same thing happened under the notorious Tal bill (the previous version of the law exempting the ultra-Orthodox from service, which was rejected last year by the Supreme Court). Not only that: The mandatory recruitment quotas for the ultra-Orthodox under the new law are even lower than those set by the Tal bill.

This is how Lapid managed to confuse us with pretty, snappy words about the history he was making. The bottom line is that it’s not at all certain we will live to see history being made. To quote a worn cliché, his words are written in ice, because even political novices know that four years is a long time in any political reality, especially in the third Netanyahu government where uncertainty is the only certainty.

No one can even bet which government will be in power two years from now. It’s a well-known secret that the prime minister still dreams of waking up in the morning without Lapid, and back in the arms of the ultra-Orthodox. In such a scenario, the whole draft reform, of which Lapid is so proud, might unravel and disappear. Once again there will be a Supreme Court appeal, once again a committee will be established and bam … another few years will have gone by and this hot potato will be dumped in the lap of a new government.

It is therefore no coincidence that while the Perry Committee was busy at work, Prime Minister Benjamin Netanyahu was maintaining open, secret channels to the ultra-Orthodox parties. They may not be in government now, but they’re ready to hop back in at any given moment. The prime minister seemingly backed legislation that is bad for them, but in fact both the Shas and Yahadut HaTorah ultra-Orthodox parties understand that he had no choice. And anyway, it could have been much worse — for example, if the law had put the enlistment into force starting now.

Lapid decided to wage a not-very-important battle over the inclusion of criminal sanctions against those who fail to comply with the new law. It sounded good. Catchy and yet determined. The finance minister was in urgent need of a victorious photo-op, one that would restore his popular appeal as the harbinger of a new kind of politics. The breach that he generated in the coalition — threatening to quit the government if his demand to impose criminal sanctions on ultra-Orthodox draft dodgers is rejected — suited Lapid to a T.

Netanyahu, for his part, did not want to waste ammunition on this battle and appeared to give in to Lapid’s demand. In fact, he would have been much harder-pressed to accept a demand for the draft to begin immediately. This would have destroyed his relationship with the ultra-Orthodox. So he acceded to Lapid’s demand for sanctions.

At the same time, he also showed Defense Minister Moshe (Bogie) Yaalon who was boss — as Yaalon’s popularity has been growing in the Likud and among the general public, “at his expense.” Yaalon, as a member of the Perry Committee, vetoed the section in the proposed bill imposing criminal sanctions — he, too, like Netanyahu, wants the ultra-Orthodox around when the battle for succession starts. But Netanyahu ordered him down from this tree, and Yaalon heard about it only on the news.

Meanwhile, we are left with legislation which is unlikely to be implemented, as was hinted by the head of the committee himself, Science Minister Yaakv Perry, in an interview with the Yediot Ahronot newspaper’s weekend edition. “When the law is approved by the Knesset, we can raise our glasses in a toast, but we will only be able to pop the champagne corks in 2016, when we see the ultra-Orthodox joining the army. Then I will be able to say it was all worthwhile,” he said.