Former Israeli Foreign Minister Avigdor Liberman’s demand to include Israel’s Arabs in the new universal national service plan is no more than a desperate attempt to show that he is still relevant. 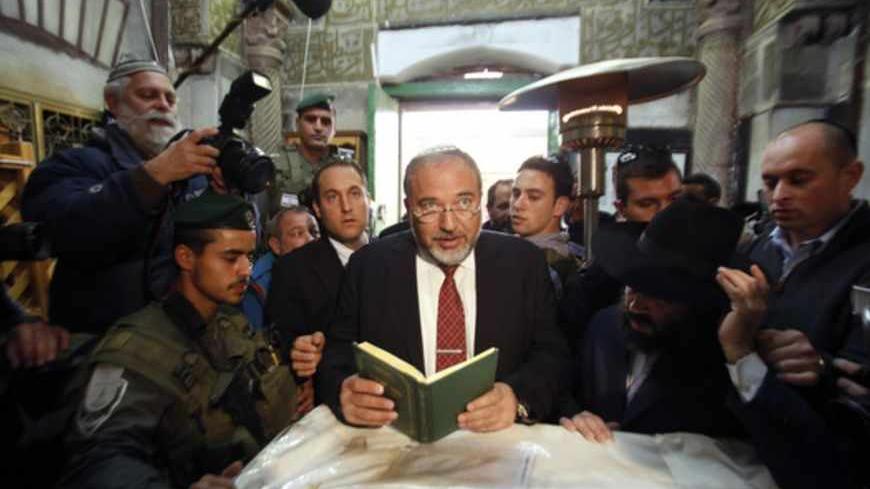 Israel's former Foreign Minister Avigdor Liberman (C) prays during a visit to the Tomb of the Patriarchs in the West Bank city of Hebron Jan. 14, 2013. - REUTERS/Baz Ratner

The demand by Yisrael Beitenu Chairman and former Foreign Minister Avigdor Liberman to include Israel’s Arab citizens in a new bill to institute universal military service is no more than a cheap trick. The threatening demand is designed to keep Liberman in the public eye as a forceful politician even now, when he is deep in the throes of a legal battle, and to signal his voters that he is still relevant.

It therefore came as no surprise that Liberman suddenly popped up on May 25 just as the Perry Committee was about to publish its recommendations to reform the military and national service draft. Liberman’s representative on the committee, Public Security Minister Yitzhak Aharonovitch, threatened that if the new legislation were to apply only to the ultra-Orthodox, thus continuing to exempt the Arabs, Yisrael Beitenu would vote against the proposed bill.

Ultimately, the committee’s deliberations became deadlocked early on May 27, but over a different detail: disagreement over criminal sanctions to be automatically imposed on ultra-Orthodox men who fail to comply with the new draft quotas.

This is not the first time that Liberman has manipulated Israel’s Arabs for political ends. He built his entire 2009 election strategy on the back of the Arabs when he adopted a slogan making Israeli citizenship conditional on allegiance to the state. The campaign was masterminded by his American consultant, Arthur Finkelstein. The noted campaign strategist recommended that Liberman go full-force with a catchy message to attract Israeli-born voters, in addition to his traditional constituency of Russian immigrants, at a time of growing radicalization of the Arab street. Finkelstein was right. The message was a perfect fit for Liberman. Yisrael Beitenu raked in 15 seats in the 120-member Knesset, and Liberman was awarded the foreign minister’s job and became the strongman in that term's administration.

Liberman acted the exact same way two days before the Plesner Committee published its recommendations in July 2012, bringing about its disintegration by claiming that it had failed to deal with the issue of national service by the Arabs. By doing so, Liberman, then still foreign minister, jettisoned a rare historic opportunity to draft the country’s ultra-Orthodox Jews. Unfortunately, Prime Minister Benjamin Netanyahu went along with his scheme. As a result, former defense minister Shaul Mofaz resigned from the government, and the Plesner Committee’s recommendations were buried. If they had been approved, they could have paved the way for the conscription of several thousand ultra-Orthodox soldiers by now.

By the way, the Plesner Committee adopted, de facto, the principle of “universal service” as demanded by Liberman. At the outset of its recommendations, however, the committee made clear that mandatory service by the Arabs would require comprehensive planning, including dialogue with the Arab public, which had never been done. Former Knesset member Yohanan Plesner, in the many interviews he gave, including on this website, explained that compulsory national service for Israeli Arabs had to be tackled as a separate project, requiring in-depth work over a period of time to enable its implementation.

Therefore, Liberman’s current demand is pure populism. He, too, knows full well that drafting Arab citizens is no less a complex and complicated issue than drafting ultra-Orthodox Jews. Imposing compulsory national service on every Arab of the age of 18 requires the establishment of separate recruitment systems. Up to now, no one has addressed the question of how to draft 30,000 Arabs each year. No one has dealt with the cost issue, either, nor with the means of carrying out such a plan through dialogue.

This does not prevent Liberman from reverting to the strategy of using Israel’s Arabs to his own ends and regurgitating the claim that a principle is involved — that there’s no reason the Arabs cannot share the burden, like everyone else.

There is, however, no reason to treat Liberman’s threats seriously, because they are merely an attempt to keep his voters close. Liberman knows full well that the new “shared burden” legislation will be approved, with or without him. He is aware that according to the Supreme Court ruling, the law should have been implemented a long time ago and that Netanyahu cannot continue to drag his feet. Nonetheless, he is not willing to pass up an opportunity to use Israel’s Arabs for his own political needs. There is no ideology, nor values, involved in Liberman’s demand to draft the Arabs. There is only cynicism and an effort to show that he is still in the game.