The leader of the Iraq Citizen Coalition is calling for a renewed National Alliance among Iraq's Shiite political parties. 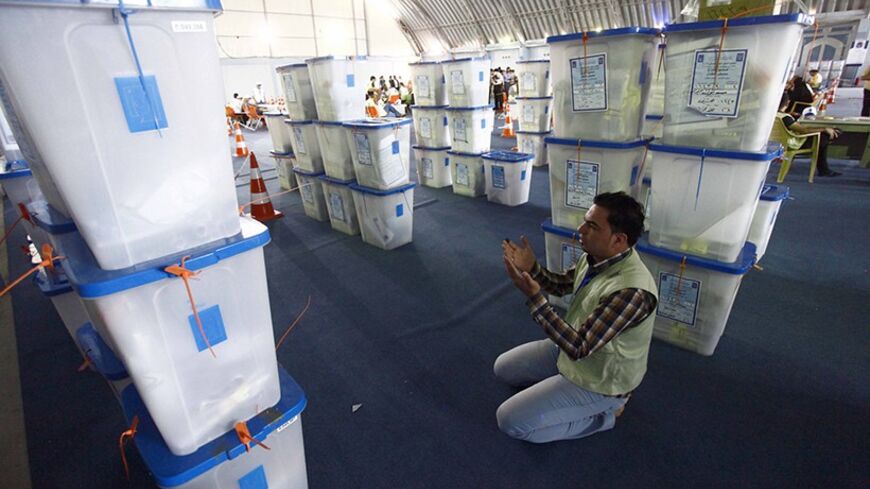 A member of the Independent High Electoral Commission prays near ballot boxes during vote counting at an analysis center in Najaf, May 2, 2014. - REUTERS/Alaa Al-Marjani

Citizen’s Coalition leader Ammar al-Hakim explicitly called for the reshaping of the National Alliance based on new grounds on April 30, after the presidential elections. Despite the fact that Hakim called for the formation of a strong and homogeneous government, he, just like other key Shiite leaders, is still adamant that the National Alliance, which includes the main Shiite forces, be the general framework and foundation of the next Iraqi government. This is despite the fact that, with the acknowledgment of its members, this alliance did not assume any pivotal role in Iraqi political life in 2010 except for the nomination of the prime minister.

According to unanimous leaks and unofficial sources, three main Shiite forces have swept the latest Iraqi elections, whose results have yet to be officially announced once the ballot count is finalized. These forces include Prime Minister Nouri al-Maliki’s State of Law Coalition, which according to sources likely received the most votes; the Citizen Coalition led by Ammar al-Hakim, which appears to have made huge progress in terms of seats gained compared to the 2010 elections (when it won 16 seats); and the Sadrist Movement, which is expected to show a significant decline in seats compared to the past elections (when it won 40 seats), while retaining a significant political presence.

On the sidelines of this tripartite map, other forces, figures and movements — such as the Badr Organization, the Fadila Party and the National Reform Movement — are generally considered allies of Maliki. However, they might change their alliance and back Hakim and Muqtada al-Sadr based on changing equations.

Far from the unconfirmed figures that were leaked, the movements of Sadr and Hakim have been clearly trying, since the provincial elections in 2013, to find a balance among the Shiite forces’ alliance to face Maliki’s rise that is happening at their expense in the Shiite street.

Although the latest elections might create such balance, they might not ensure the revival of the "National Alliance" among Shiite political parties.

Maliki raised the slogan of political majority government and has so far clung to it. He also signed international agreements with some Sunni and Kurdish forces to renew his term. These steps might lead to the collapse of the National Alliance, whose presence is still considered a priority for the main Shiite reference in Najaf and, to a great extent, a priority for Iran. Sources close to Iran confirmed to Al-Monitor that Tehran still supports the continuation of the National Alliance — including the same three Shiite forces — to form an institution that elects the prime minister and plays a role on par with that of the parliament in monitoring and decision-making processes.

On May 4, Rida Jawad Taqi, a leader of the Islamic Supreme Council, told Al-Monitor that “the objective of Hakim’s recent call is to rehabilitate the National Alliance, which consists of several Shiite parties and groups, after its role has been marginalized by the member parties. Now, time has come for the Alliance to turn into an institution that is active in building trust between the Iraqi parties, and that monitors the performance of the parties it includes."

However, it does not seem that Hakim's call constitutes a priority for Maliki’s coalition today. Maliki is trying to use his expected victory in these elections to adopt new work mechanisms that might not involve the National Alliance.

Iraqi political sources confirmed to Al-Monitor that there are two scenarios related to the revival of the National Alliance.

The first scenario reflects the perspective of Sadr and Hakim. In this scenario, the National Alliance would be transformed into an institution that has power over the prime minister and enjoys an internal system and a majority-based decision-making process. It would also have a standby shadow government in case there was a justified need to change the government.

The second scenario is suggested by Maliki himself. In this scenario, the alliance's decision would be drafted in light of the figures and data generated by the elections. The greatest power would have the greatest vote within the coalition, and would be responsible for the nomination of the prime minister. Thus, less significant forces ought to support the biggest powers.

Both scenarios are elusive. Turning the alliance into an institution does not have any legal effect on the ground. In 2010, the form of the alliance and the agreements revolving around it were inclining in this direction. However, it failed to take up this role and continued to carry out mere formalities, while Maliki’s power was growing.

On the other hand, Sadr and Hakim cannot accept such a scenario, because it means giving Maliki the chance to end the role of two Shiite powers that will compete with him in the future.

The issue of the prime minister's nomination is decisive in this regard. Sadr and Hakim may accept that the State of Law Coalition nominates a figure other than Maliki to head the future government. They can request the support of more than one candidate for Sunnis and Kurds to choose from among them. However, keeping Maliki in power represents a direct threat to both powers.

Such talk cannot be understood, except in light of the following electoral information:

In this context, the readings do not indicate that Sadr and Hakim will agree to Maliki’s third term in office. Maliki is no longer seen as a mere head of a political party but “a Shiite icon” who gains votes as the “defender against terrorism,” and the “strong man” who is the “alternative to the traditional clerics.”

On the other hand, Maliki will not accept to share the political, security and governmental decision-making with Sadr and Hakim, who have jointly failed to pose a serious electoral threat to him.

Reviving the National Alliance will not be an easy task, and may collapse at any moment, as the Shiite division is no longer between equal forces. This division threatens to annihilate one party by another in the future. No power will accept to come to an end even under the banner of keeping Shiites united in Iraq.