Most Shiite forces, for now, think they have an interest in rebuilding the alliance, but the final call will depend on the decision of Iraqi Prime Minister Nouri al-Maliki and the State of Law Coalition, which won the most votes in the parliamentary elections last month. 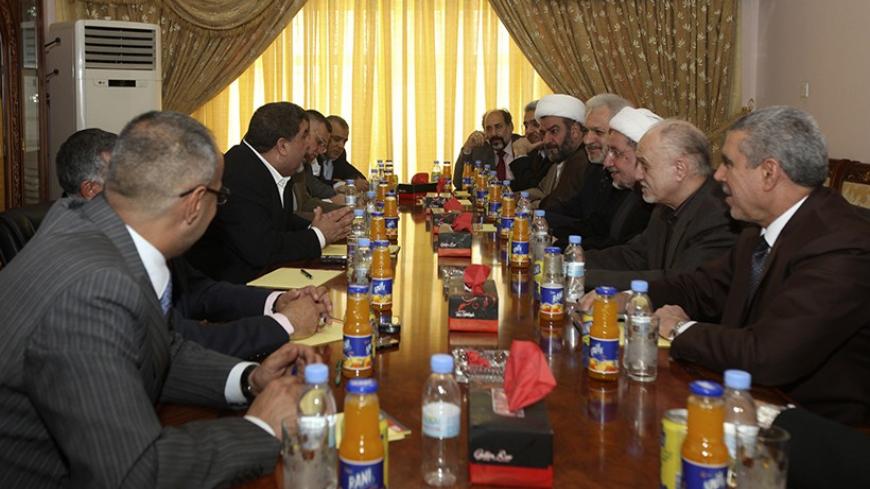 Members of the Iraqi National Alliance and the State of Law Coalition hold a meeting in Baghdad, Oct. 1, 2010. - REUTERS/Mohammed Ameen

Even before the Iraqi parliamentary election results were announced, the competing Shiite groups started talking about restoring the National Alliance, composed of Iraq's leading Shiite parties. There was a special emphasis on the need to turn it into an effective “institution” led by a collective leadership, according to the statement on May 16 by the Islamic Fadila Party after its leadership met with that of the Islamic Supreme Council in Iraq (ISCI).

In its media rhetoric, the ISCI focused on the need to preserve the unity of the National Alliance, which brings together the Shiite forces, and prevent its disintegration in the next phase.

But these “reconciliatory” statements did still not address many important questions at hand, such as: On what foundations will the Shiite alliance be built this time? What compromises are needed to reform the alliance after a bitter electoral fight among the Shiite blocs?

It could be argued that the main issue to decide whether the Shiite alliance continues or dies is the issue of whether Maliki stays in office. The State of Law Coalition feels that the election results produced a clear, popular mandate for the bloc to lead the next government and that the survival of the National Alliance depends on the rest of the Shiite forces acquiescing to the election results and recognizing that State of Law represents the vast majority of the Shiite vote.

One day after the announcement of election results on May 1, Al-Masalah website, which is close to the prime minister's office, published an article calling on the competing Shiite forces to accept the results and acknowledge that a Shiite victory has been achieved. The article said that the Shiite alliance groups have achieved a numerical majority in the next parliament (about 174 seats out of 328 total) and called on the competing Shiite forces to recognize the victory of Maliki’s coalition and support it to lead the next government.

On the other hand, deputies from the Sadrist Ahrar bloc announced that they, too, want to see the return of the Shiite alliance, but on condition that the alliance choose a prime minister who is acceptable to all major parties in the country.

With the exception of the State of Law Coalition, all other Shiite groups are looking to “institutionalize” the National Alliance to lead the next government, instead of keeping it as a marginal entity whose only mission is to support the decisions of the prime minister. The “institutionalization” idea aims to restrict the prime minister with obligations that prevent him from monopolizing power, a charge repeated by Maliki’s opponents when they criticize his policies.

In an article published on May 18, the day before the official election results were announced, Adil Abdul-Mahdi, a leading figure in the Supreme Islamic Council, a former vice president and a permanent candidate for the prime minister’s post, said that the best scenario was that the forces of the Shiite alliance meet and quickly agree on a prime minister, and then move to negotiate with the Sunni and Kurdish groups.

But to accomplish that, Abdul-Mahdi said that the Shiite alliance should be built on the basis of parity between the State of Law Coalition on the one hand and the Citizen Bloc and Sadrist movement on the other, and that each party should have the right to veto the process of choosing the next prime minister. If this doesn’t happen, said Abdul-Mahdi, the likely scenario is that the State of Law Coalition would try to secure a majority alliance from outside the Shiite umbrella. In this case, the other Shiite parties would consider themselves freed of their commitments toward the Shiite alliance and would also seek to weave alternative alliances with non-Shiite forces.

Abdul-Mahdi pointed to a memorandum that Maliki sent ahead of the announcement of election results to the Kurdish and Sunni forces, inviting them to start negotiations to form a government headed by Maliki. Adbul-Mahdi considered that memo evidence Maliki is not insistent on the Shiite Alliance. Abdul-Mahdi said that despite the superiority of Maliki’s electoral coalition, the competing Shiite forces, the Kurds and the Sunnis, are together able to form a comfortable majority to prevent Maliki from remaining in office.

It seems that the various Shiite groups at this stage are trying to absorb the “shock” of the results and take the pulse of the other parties. Each party thinks that its interest is not to dismantle the Shiite alliance, at least during the early stages of negotiation. Maliki thinks he can get a mandate to stay on as prime minister via the Shiite alliance, where he has a majority. Perhaps he can also benefit, as happened after the 2010 elections, from the Iranian pressure on the other Shiite groups to accept a third term for him.

Also, the rest of the Shiite parties think that staying in the National Alliance strengthens their bargaining position with non-Shiite forces helps minimize the concessions they would have to give to other parties, while pleasing the Iranians who favor the maintaining of the Shiite alliance.

Maliki likely fears that if he rushes to do business with parties outside the Shiite alliance, his Shiite rivals would do the same and that they may have a better chance to win over the Kurdish and Sunni forces, because there is a general consensus among them to not keep Maliki in power.

At the same time, the rest of the Shiite groups fear that this consensus is not solid enough to withstand discussing the details, and that going alone to the Kurdish and Sunni forces may put them in a weak bargaining position and make them appear responsible for breaking Shiite unity.

An important factor here are the choices that the Sunni and Kurdish forces will make. If the Sunnis and Kurds rush to form ethnic and sectarian alliances, then the Shiite alliance may do the same.

Some are proposing scenarios such as replacing Maliki with another figure from the State of Law Coalition as a compromise to ensure the continuation of the Shiite alliance. Yet, such a solution may come at a later stage, after the favored options by most parties have been exhausted. What is certain now is that a harsh negotiating season will begin as the conflict moves from its electoral aspect into the closed negotiating rooms and deals among the elite.