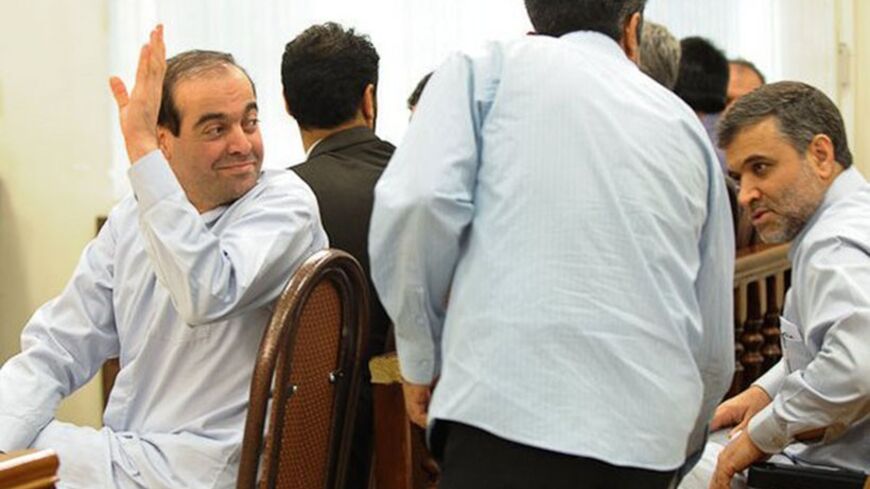 Iran has hanged businessman Mehafarid Amri-Khosravi for his role in the $2.7 billion embezzlement scandal that rocked the sanctions-hit country in 2011. His May 24 execution stirred a variety of reactions, including sympathy, with some even suggesting the timing was related to a letter he recently wrote to Iran’s Supreme Leader Ayatollah Ali Khamenei.

Amir-Khosravi, the primary suspect in the Islamic Republic’s largest embezzlement case ever, was convicted along with 39 other individuals of having a role in the case that is referred to as “the big embezzlement” or the “3,000 billion toman embezzlement.” The case also involved money laundering, forgery and bribery at private and state banks from 2007 to 2010. Three other people were also sentenced to death, according judiciary spokesman Gholam-Hossein Mohseni-Ejei. Other individuals have received sentences ranging from three years to life in prison.

The scandal heavily damaged the presidency of Mahmoud Ahmadinejad and was an international embarrassment for the Iranian government. Despite numerous accusations, no top officials from his administration have been convicted of any crimes. Mahmoud Reza Khavari, the head of the government-owned Bank Melli, Iran’s largest bank, fled to Canada when the scandal broke. Iran has been pushing for his extradition. Former Vice President Mohammad Reza Rahimi under Ahmadinejad is currently out on bail in a corruption case concerning Iran’s largest insurance company.

The news of Amir-Khosravi’s death shocked many online. Some felt that he was used a scapegoat to cover up the corruption of higher figures. They compared Amir-Khosravi’s case to the 1995 execution of Fazel Khodadaad over a $400 million corruption case at Bank Saderaat.

When his death sentence was announced in February 2013, Tehran University professor and outspoken analyst Sadegh Zibakalam defended Amir-Khosravi in an op-ed in Ghanoon, “Genius Sentenced to Death.” Zibakalam wrote that the heavy sentences and the photography of the court proceedings (not common practice in Iran) indicated that the judiciary had used the case for “propaganda and political” purposes rather than investigating what really happened.

Opposition website Kaleme suggested Amir-Khosravi’s letter to Ayatollah Khamenei seemed to have something to do with his sudden execution, which was carried out “without prior notification or legal process.”

Kaleme believes that Amir-Khosravi’s attempts to reach out to the public and his letter to the Ayatollah Khamenei went against the supreme leader’s wishes to not “protract” the issue. The contents of his letter are still unknown.

When news of the case broke, many top officials accused one another of corruption and involvement. The story made headlines domestically and internationally. Khamenei’s request to not “protract” the issue sought to end the public spectacle that was embarrassing the country and revealing wide-scale corruption in the government.