Ahmadinejad’s chief of staff accused of links to embezzlement 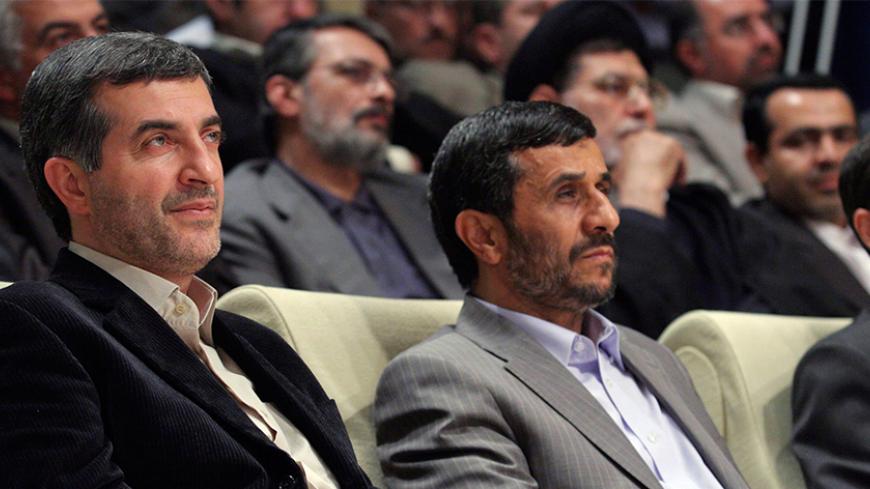 In an interview with an Iranian newspaper, Justice Minister Mostafa Pourmohammad talked about corruption cases when he served as the head of the General Inspection Office, an oversight body that operates under the judiciary.

Pourmohammad, who served as interior minister from 2005-2008 during former President Mahmoud Ahmadinejad’s first term, talked about the problems with his former boss and accusations of bias. Pourmohamad said, “After my first year in the Cabinet, I was confronted with the administration’s lack of discipline, irregularities and incorrect statistics. … Wrong, propagandistic and enlarged statistics were realities that existed and inside that administration I was entangled with them.”

Pourmohammad said that after he was “removed” from the Cabinet and was appointed by the judiciary to head the General Inspection Office, “nongovernmental officials and media would come to me and ask if the [administration’s] statistics were correct. And I would respond that the General Inspection Office would not confirm these statistics or that these statistics were not correct.” He continued that his job demanded that he supervise the different governmental agencies and could not longer say, “I am part of this administration and these statistics have nothing to do with me or as a former member of the administration choose expediency [and be silent]."

He emphasized, “The personal differences between Ahmadinejad and me had no influence in producing my reports.”

Pourmohammad said that when he presented his reports to the administration, they would rarely be answered and some even told him “we’ve been given orders not to answer.” He claimed that Ahmadinejad did not personally read the reports and that after his office pursued the matter, Ahmadinejad’s chief of staff, Esfandiar Rahim Mashaei, would say that the report was sent to the relevant ministry.

When asked how Mashaei’s name was linked to various cases, Pourmohammad said, “He was the chief of staff of Ahmadinejad and had a considerable role in the $2.7 billion embezzlement.” The “big embezzlement” case shocked Iranians when the story broke in 2011. Ahmadinejad denied that his office was involved in any way with the embezzlement.

Pourmohammad also said that a number of high profile and big budget projects were under the orders of Mashaei. When asked why charges were never brought against him, Pourmohammad said Mashaei claimed that he had only made “recommendations” for the various projects.

Mashaei was one of the most controversial figures under the Ahmadinejad administration and was one of the main sources of conflict between Supreme Leader Ayatollah Ali Khamenei and the former president. Critics accused Mashaei of promoting pre-Islamic Persia too much as well as less clerical involvement in politics. Many speculated that despite heavy political costs, Ahmadinejad stuck by his longtime ally in hopes that Mashaei would run for president in 2013. Mashaei registered for the presidential elections but was disqualified by the conservative Guardian Council.

Pourmohammad said that his office even had accused Ahmadinejad and a number of his other ministers of a crime in the Qom monorail project, which Pourmohammad described as having zero impact on traffic and “a waste of government money.” Pourmohammad also said that the majority of the corruption took place in the last two years of Ahmadinejad’s administration.

Pourmohammad’s comments, while they have been covered widely in Reformist media, may not result in charges being brought against more Ahmadinejad era officials. In Iran, the justice minister does not serve the same role as the attorney general in the United States. The justice minister is more of a liaison between the administration and the judiciary.

Two former Ahmadinejad officials so far have been arrested over corruption charges, and one is currently serving a five-year sentence. Ahmadinejad’s lawyers have filed a complaint against Rouhani administration officials over some of the specifics of the corruption accusations.