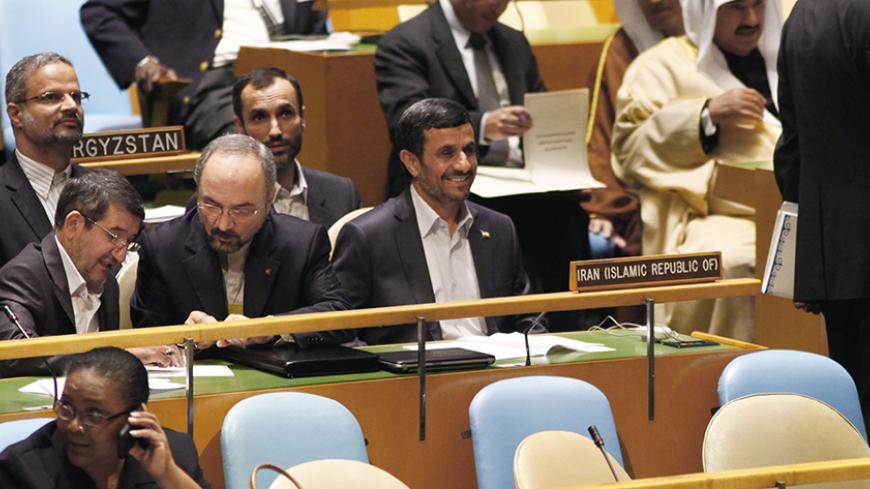 Hamid Baghaei, former President Mahmoud Ahmadinejad's vice president in charge of executive affairs, has been arrested, Iran’s Judiciary spokesman Gholam-Hossein Mohseni-Ejei told reporters June 8. He did not elaborate on the charges against Baghaei, but many suspect corruption charges.

Baghaei, one of Ahmadinejad’s closest advisers, first entered the administration in 2006 as deputy of the cultural heritage and tourism organization. By 2011, Baghaei simultaneously held the position of vice president in charge of executive affairs and headed the presidential center. He would often accompany the president to the United Nations.

He's the second official from the Ahmadinejad administration to be arrested. Mohammad Reza Rahimi, Ahmadinejad’s first vice president from 2009 to 2013, was sentenced in January 2015 to five years in prison for embezzlement. He was fined $1.3 million.

Many of Iran’s Reformist newspapers celebrated Baghaei’s arrest and used the occasion to taunt Ahmadinejad for once claiming that he had “the most pure administration” in Iranian history and warning that charging his Cabinet with corruption would be a “red line.”

“Mahmoud Ahmadinejad claimed his administration as the purest administration in history," Ebtekar newspaper wrote. "At this rate, the discovery of various corruption and arrests of the closest figures to the former president, contradicts his claim. While previously there was only news of arrests of economic actors close to the administration, such as Mehafarid Amir Khosravi and Babak Zanjani, lately these arrests have reached Ahmadinejad’s inner circle.” (Iranian billionaire Zanjani was arrested in 2013 for corruption. Khosravi was executed in 2014 over a 2011 embezzlement case.)

A number of Ahmadinejad era officials tried to distance themselves from Baghaei when approached by Ebtekar.

Abdulreza Davari, who was Ahmadinejad’s media adviser and is still close with the former president, told Ebtekar that he only heard about Baghaei’s arrest from news sites and said that Baghaei “is not active in the Velenjak offices.” The Velenjak building is where former Ahmadinejad officials meet and, some claim, are planning to present candidates for the 2016 parliamentary elections.

Mahshid Sotudeh wrote in Etemaad newspaper that when Ahmadinejad promoted Baghaei four years ago, he said that Baghaei was “efficient, resourceful, competent, and had reliable managerial abilities.” Sotudeh sarcastically wrote that while “this efficient and resourceful manager” said two years ago that he was not scared of being arrested because he had done nothing wrong, he was finally arrested. She compared Ahmadinejad officials suddenly distancing themselves from Baghaei to how Ahmadinejad distanced himself from Rahimi after he was sentenced.

A number of high-profile corruption cases occurred under Ahmadinejad’s presidency, with the largest being a $2.7 billion embezzlement case. Ahmadinejad had tried to distance his administration from accusations of financial corruption, saying no one had been able to directly accuse his inner Cabinet.

Shargh Daily wrote, “It’s not surprising that the doors of prison have been opened to those close to Ahmadinejad and his managers over financial, legal and mismanagement [issues].” The article continued, “The way it’s going forward, Baghaei is not the first and probably won’t be the last Ahmadinejad official to be summoned and imprisoned.”