After a former commander of Iran’s Revolutionary Guard Corp commented about Hezbollah and the formation of an Iranian committee to help rebuild Syria, the story was censored and the article removed. 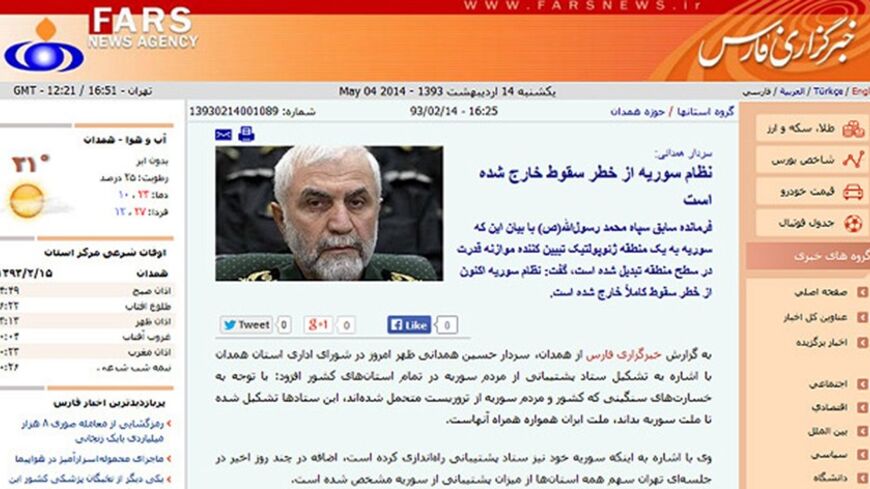 A screen capture of an article on former commander of the Islamic Revolutionary Guard Corps General Hussein Hamedani is displayed on the Fars News website May 4, 2014. - Fars News

A former commander of Iran’s Revolutionary Guard Corps was censored after he made comments about the formation of an Iranian committee to plan for Iranian provinces to rebuild Syrian provinces and the establishment of a second Hezbollah inside Syria. An article published about the comments was taken down.

General Hussein Hamedani’s comments were made at the administrative council of Hamedan province. The full Fars News article is still available via Google's cache.

Hamedani had announced the formation of a committee to help rebuild Syria, saying, “With consideration of the heavy damages the country of Syria and its people have suffered at the hands of terrorists, this committee has been formed so that the Syrian people know that the Iranian people will always be with you.”

Hamedani asked the Iranian people to view the civil war in Syria as they do the eight-year Iran-Iraq war. When Iraq's then-leader Saddam Hussein invaded Iran, many Iranians rallied to defend the country. Hundreds of thousands were killed in what was commonly referred to as the “Sacred Defense” or the “Imposed War.” He said that Iran should fight in the Syrian war because the conflict is “at the level of the Sacred Defense.”

While this point of view might be that of the Revolutionary Guard, the Iranian media, particularly television, has covered the Syrian crisis only from the perspective of unrest or terrorism. It has not glorified those who have died in the war like it did for martyrs of the Iran-Iraq war. The funerals of IRGC fighters who have died in Syria are typically only covered by hard-line newspapers and websites, with few details given about their deaths.

Hamedani also said that Saddam’s Baath party and Syria’s Baath party are “completely different” and reminded the audience of Syria’s help for Iran in the Iran-Iraq war, especially in cutting off Iraqi oil to the Mediterranean. He also recalled that Syria was the first country to officially recognize the Islamic Republic of Iran.

Hamedani said that Iran has been instrumental in helping the Syrian government develop strategies in its fight against armed groups. He added that a “domestic mobilization” consisting of 42 groups, 128 battalions and 70,000 Alawite, Sunni and Shiite fighters has been formed.

According to Hamedani, before the United States was to attack Syria, it was warned by Israeli Prime Minister Benjamin Netanyahu that rather than “weakening Hezbollah and cutting off Iran’s hand, Iran has formed a second Hezbollah in Syria.”

On the foreign fighters supporting the Syrian government, Hamedani said that while the Syrian army is “loyal,” the dangers of relying solely on the army had been seen in Egypt when the army withdrew its support from deposed President Hosni Mubarak. He said that there are currently 130,000 trained Basijis ready to enter Syria.