A previously unpublished speech by an Iranian general who was killed in Syria may reveal efforts to justify Iran's growing involvement in Syria. 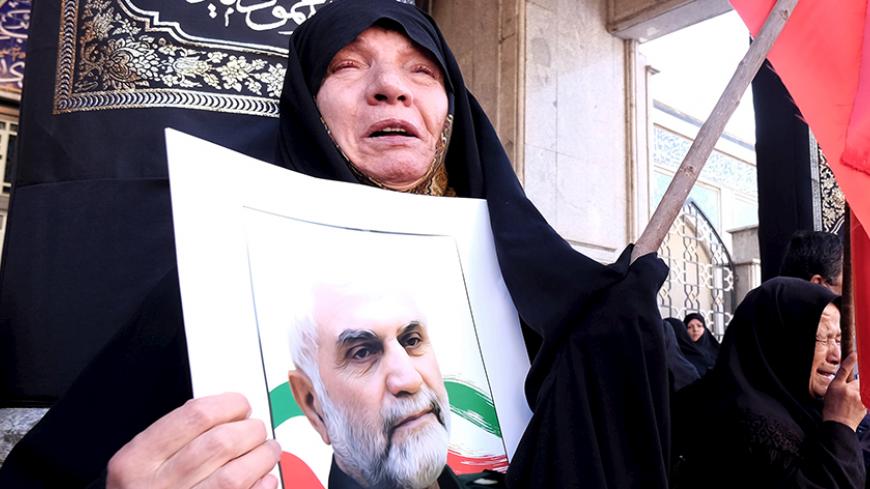 Since major operations began in late September in Syria, Iran has lost dozens of military officers — just under 50, according to Iranian Supreme National Security Council Secretary Ali Shamkhani. The coordinated offensive in Aleppo with Russian air power, the Syrian army and Iranian advisers has resulted in major victories, but at a heavy cost. And Iran's game plan doesn't seem likely to change.

The Syrian civil war is treated as a national security issue in Iran and by Iranian media. Media critical of Iran’s involvement in the 4½-year-old conflict typically refrain from controversial coverage of the topic, making it difficult at times to gauge public opinion. In some ways, the Syrian war is treated the same as the nuclear deal was treated under the administration of former Iranian President Mahmoud Ahmadinejad, in that there was little discussion or internal debate, particularly in the media. While President Hassan Rouhani’s tenure has brought a relatively robust and sometimes destructive debate on the nuclear issue, the topic of Syria still appears off-limits. This is why the statements of Iranian officials can be revealing and shed light perhaps not on public opinion, but on some of the internal discussions taking place in the military and political leadership.

Mashregh News, a hard-line website believed to be affiliated with Iran's security services, recently published some of the contents of a February speech by Iranian Revolutionary Guards Corps Brig. Gen. Hossein Hamedani. Hamedani died Oct. 9 in Syria, making him the highest-ranking Iranian general to be killed in the country. Mashregh did not say why the content of the speech had not been published until now, but the sections of the speech chosen for publication suggest an attempt to explain the increasing number of Iranian casualties and involvement in Syria.

Assertions by Hamedani, who had been responsible for organizing the Syrian paramilitary units for a number of years and had only recently returned to Syria for the large-scale offensive, cannot be independently verified and may at times appear as an attempt to frame a costly civil war in a positive light. But the speech reveals what some Iranian officials view as significant transformations and events in the war.

Contrary to most perceptions, Hamedani suggested that the Syrian civil war is actually Iran’s war, saying, “While there are whispers in Iran about why we are paying the costs of Syria,” it is actually the Syrians who are paying the cost of Iran’s war. Hamedani believed the war is actually against the “arrogant” countries, a term Iranian hard-liners use for the United States and other world powers. He added that all Syrian President Bashar al-Assad would have to do is make nice with the United States, and presumably cut relations with Iran, and the war would come to an end.

According to Hamedani, Syria is Iran's buffer zone, and today plays a more significant role for Iran than Lebanon, Iraq, Yemen and Bahrain for a number of reasons, including Syria's shared border with Israel. Many analysts believe Syria also is important because it provides Iran access to the Lebanese group Hezbollah.

Hamedani also claimed that before the war, Assad’s Baath Party had put “iron walls” around Iran’s activities in the country. But given the transformations in the country in the past few years, the former secular army that used to punish people for praying now has Syrian generals praying behind the leader of the Quds Force, Cmdr. Gen. Qasem Soleimani, and Syrian soldiers fasting during Ramadan.

Regarding his work organizing the militias, Hamedani said most of them are Sunnis. Iran had organized 42 brigades and 138 battalions, and 30,000 Sunni soldiers were trained in Iran, he said.

Hamedani insisted that Iran only sends advisers to Syria and that they are at the front line under Syrian command, saying relations are so close that Syrians will name their children after the Iranian commanders.