Iranian officials and media argue that the fight against terrorists in Syria and Iraq is in defense of Iran. 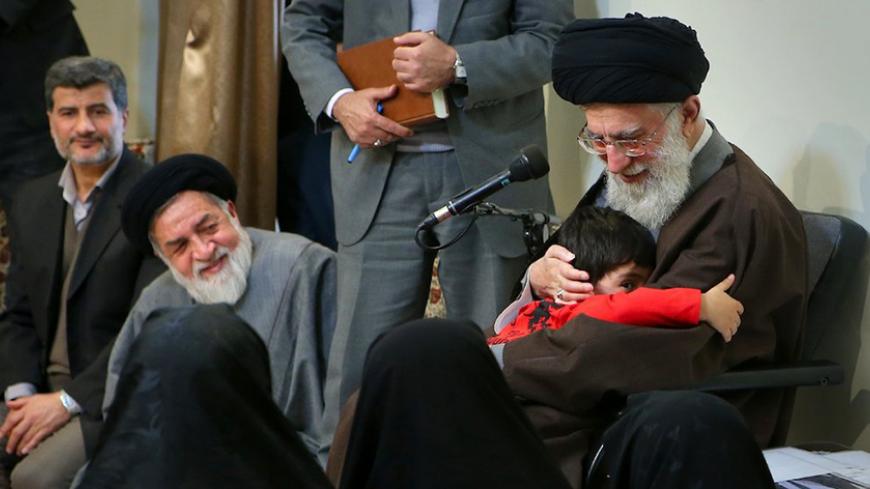 A young boy in a red shirt hugs Iranian Supreme Leader Ayatollah Ali Khamenei in a picture published on Khamenei's website on Feb. 6, 2016. The meeting took place nearly one year ago, after the boy's father was killed in the fight against the Islamic State in Syria and Iraq. - Khamenei.ir
Arash Karami
@@thekarami
February 10, 2016

When the website for Supreme Leader Ayatollah Ali Khamenei published photos of a meeting with the families of Iranian soldiers who died fighting in Syria and Iraq, the pictures were shared widely online. The most striking pictures were of a young boy in a red shirt hugging Khamenei and another of the same boy holding up over his head a picture of his father who had been martyred in the fight against the Islamic State (IS) in Syria and Iraq. While the pictures were published Feb. 6, according to Khamenei’s website, the meeting took place nearly one year ago.

It is not clear why the meeting was advertised and made public nearly one year after the fact. But in the face of a rising death toll, there appears to be a push by Iranian leaders to justify its presence in Syria and Iraq. The latest issue of The Line of Hezbollah, a publication dedicated to analyzing the speeches and comments of Khamenei, quoted previously unpublished comments by Khamenei “to the families of martyrs” in Syria and Iraq.

Khamenei reportedly said at the meeting, “They went to fight the enemy and if they did not fight, this enemy would be inside the country. … If they were not stopped, we would have to fight them in Kermanshah and Hamedan [provinces in western Iran].” While Iranians who fight in Syria and Iraq are referred to as “defenders of the shrine,” Khamenei said that they are also defending Iran.

Other officials have also previously offered the argument that Iran must fight terrorists in Syria so that it does not have to fight them in Iran. When Russia entered the Syrian civil war in October 2015 to support Syrian President Bashar al-Assad, Iranian and Syrian fighters on the ground supported the Russian air campaign. While the joint Russian, Iranian and Syrian campaign has successfully pushed back the Syrian opposition, Iranian casualties have also increased dramatically in comparison to previous years. This may explain why Iranian officials have been praising and highlighting the efforts of the fighters in Syria.

While there was a time when only hard-line publications would report Iranian deaths in Syria, today there is more widespread coverage, especially on social media accounts. Iranian journalists in Syria share pictures and names of those killed in Syria on their Instagram pages, and bloggers share their personal stories.

The funerals of those killed are now public affairs attended by the highest-ranking Iranian officials. The head of Iran’s Islamic Revolutionary Guard Corps (IRGC), Mohammad Ali Jafari, attended the Feb. 6 funerals of five soldiers killed in Syria. A picture of Jafari kissing one of the coffins was highlighted in a number of news sites that covered the event. At the funeral, Jafari said, “Our policy is not to send many people to Syria to directly fight, but we are witnessing a great deal of eagerness and desire from the IRGC soldiers to be in Syria.”

Yalasarat, the publication of Ansar-e Hezbollah, republished an article by Javan newspaper, which is linked to the IRGC, on Feb. 8 likening the fight in Syria and Iraq to “another Sacred Defense,” a term used for the Iran-Iraq War. The article argued that IS and other Sunni fundamentalist groups referred to as “takfiris” in Iranian media have openly claimed that after destroying the shrines in Iraq, they will come to Iran and destroy the shrine of the eighth Shiite imam, Imam Reza, in Mashhad. The article also quoted the imam of the grand mosque in Mecca, Abdul Rahman al-Sudais, as saying that there is a war on the Shiites and Iran. The article said that these threats must be taken seriously, and “it is completely clear why Iranian forces must help Iraqis and Syrians.”