Iranian general killed in Syria came back for special operation

An Iranian general recently killed in Syria had returned to Tehran nearly a year ago and went back to Syria recently to take part in a special operation. 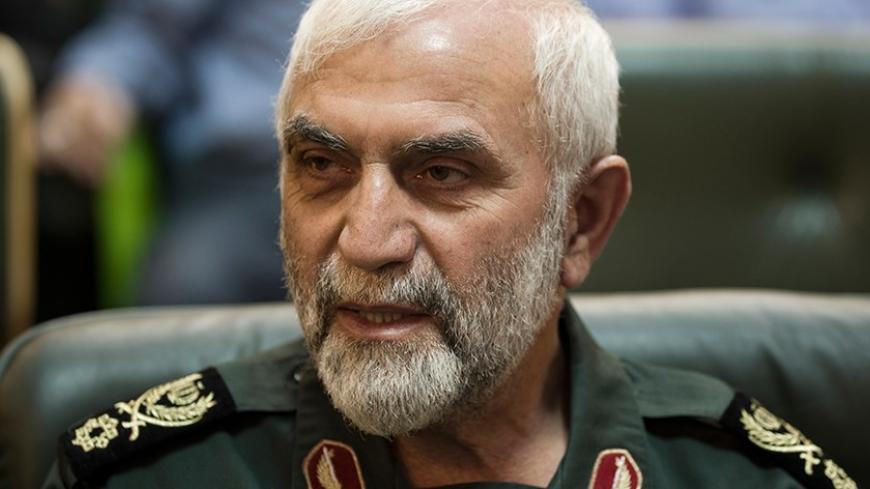 The website for the Islamic Revolutionary Guard Corps (IRGC) confirmed Oct. 9 that Brig. Gen. Hossein Hamedani was killed in Syria. Hamedani is perhaps the highest ranking Iranian general to be killed in Syria’s 4-year-long civil war. He played significant roles in major events of the Islamic Republic, from the Iran-Iraq War and the 2009 post-election protests to Iran’s increasing involvement in propping up the government of Syrian President Bashar al-Assad.

According to the IRGC statement, Hamedani was killed on the night of Oct. 8 in the city of Aleppo at the hands of Islamic State terrorists. The statement described Hamedani’s role as to “protect the Shrine of Zeinab [in Damascus] and strengthen the Islamic resistance front in Syria’s fights against terrorists.” The IRGC invited the general public to attend his funeral service, which will be held in Tehran on Oct. 11.

A number of Iranian websites published accounts of Hamedani’s roles in the last 36 years. He is one of the founders of IRGC in Hamadan. After the 1979 revolution, as a member of the IRGC, he helped in putting down an insurrection in Iran’s Kurdistan region during the Iran-Iraq War. During that war, which lasted for eight years, Hamedani commanded a number of important units. Both of his memoirs, “Moonlight Khayyen” and “Brother, It Is a Duty,” cover his time at the IRGC and the Iran-Iraq War.

In 2009, Hamedani was commander of an IRGC unit, Tehran’s Mohammad Rasoulallah Corps, when street protests erupted over the presidential elections. Gen. Hassan Firouzabadi, chief of staff of Iran’s armed forces, in remembering Hamedani’s career, praised his efforts in “confronting the American coup in the sedition of 2009.”

Hamedani’s most recent role was helping to establish a people’s militia in Syria. In March, in discussing his role in Syria, Hamedani said, “Iran’s advisory actions revolve more around monitoring and activating mobilization centers with a cultural focus. We did not try to engineer the behavior or try to use designed principles; rather we spent time with practical steps to create unity and honor.”

He said that the groups that they organized consisted of Sunnis, Alawites, Christians and Ismailis and that the culture of “Sacred Defense” of the young Syrians should be presented as a model. The term “Sacred Defense” is what Iran refers to as the Iran-Iraq War.

According to Hamedani, these actions have also led to these youths to become more religious, a sign that he welcomed. He also added, “With the fighting of Shiites and Sunnis alongside each other against the terrorists, I am very happy, because statistics show a large percentage of the people’s forces in Syria are Sunni brothers.” Hamedani said that each of Syria’s 14 provinces includes these people’s forces, even provinces not under the Syrian government’s control.

It is not clear how much Hamedani’s statements were designed to shine a positive light on Iran’s support for the Syrian government and Assad and how well they conform to what is happening on the ground today. The opposition website Saham had previously reported that Hamedani had been relieved of his duties. On Oct. 9, Iranian member of parliament and former IRGC Cmdr. Ismail Kowsar said of Hamedani, “It has been one year since he has returned from his duty, but because there was supposed to be an operation and he had complete understanding of that region, his presence could have been influential.”

Throughout his career, Hamedani had held a number of other important posts as well, including commander of IRGC ground forces, deputy head of Basij and senior adviser to IRGC.