While Abdel Fattah al-Sisi is expected to win in a landslide, the low voter turnout reflects the failure of his campaign to manage expectations and build a mandate for governance. 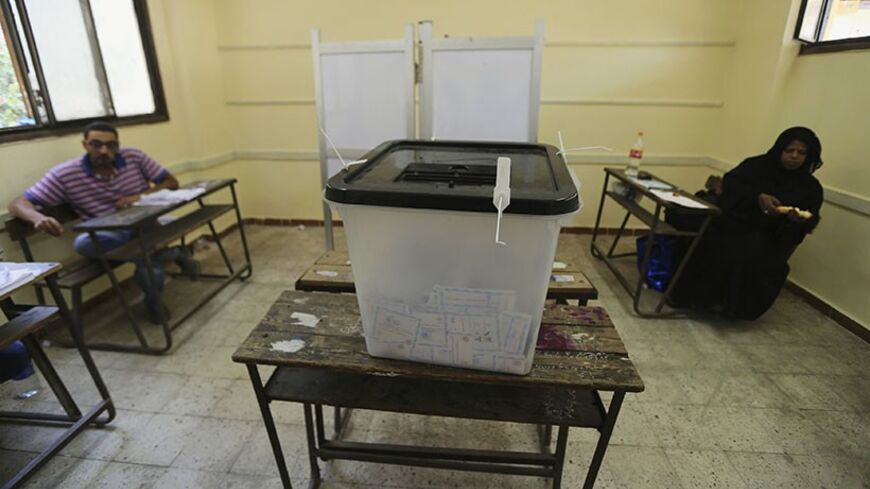 Election officials wait for voters inside a polling station on the second day of voting in the Egyptian elections in Cairo, May 27, 2014. - REUTERS/Amr Abdallah Dalsh

The first day of Egypt’s presidential elections saw turnout lower than expected. The authorities quickly initiated several measures to try to boost participation on the second day to bolster the election's legitimacy — and then extended the balloting to a third day while both candidates protested the extension.

Hamdeen Sabahi’s campaign was trying to capitalize on this situation with a “Tuesday is for Hamdeen” motto and hashtag on social media. After the extension was announced, a hashtag by some of his supporters started trending on Twitter, urging their candidate to withdraw from the race (although the legal deadline for withdrawals was long past).

The low turnout was partially blamed on procedural complications requiring Egyptians living away from their original constituencies to preregister to vote. Late last night, the government announced a number of desperate measures to try to rescue the situation, which would have required legislative amendment to be fully resolved. Tuesday was announced as a holiday and trains could be ridden for free for those who wish to go to their original constituency to vote. News also circulated that a fine of 500 Egyptian pounds ($70) on those who did not participate in elections would be enacted. The fine has been there for the past few years, but its legitimacy was in question since boycotting could be considered a political choice.

A leaked (or not) video was released last night showing Sabahi in high spirits and proud of the achievement of his campaign despite its limited means, and urging the youth who refrained from voting on the first day to support him and upset expectations on the second day. Can this swing election results toward Hamdeen and away from the retired Field Marshal Abdel Fattah al-Sisi? Very unlikely. I still predict Sisi to win with more than 75% of the vote. But even such an overwhelming victory for Sisi may be unsatisfactory for many reasons. Sisi wanted a high voter turnout to support a number of sweeping economic reforms, radical changes in the Egyptian state’s structures and institutions and heavy investment in the meganational projects he talked about.

More importantly, the turnout reflects Egyptians’ confidence in the process as a whole.

Muslim Brotherhood supporters as well as some activists celebrated the low turnout, saying that it was an indication that Sisi-mania has waned! But Pew Research's opinion poll shows that the deep divisions in Egypt are wider than what the media make them appear to be. The Muslim Brotherhood's Freedom and Justice Party asserted that only 5 million would participate in the elections and that 48% of them were Christians, 32% were pro-Mubarak and 2% were Gypsies!

But why is the turnout low? It is difficult now to say with accuracy how low the turnout is compared with the 2012 presidential elections, where around 23 million Egyptians voted in the first round, representing 46% of registered voters. Assuming that loyal Muslim Brotherhood supporters will boycott the elections, (former President Mohammed Morsi earned 5.5 million votes in the first round), that could mean 2 million to 3 million voters would abstain. When adding to that another 2 million to 3 million youth who would also boycott the elections, that would put a realistic ceiling of about 17 million to 18 million voters.

Many youth have expressed growing dissatisfaction with the way things were going, namely having a president who just resigned from the army — one who had earlier said that he wouldn't run for the presidency after removing Morsi. Many youth are also disenfranchised with the media attacks on the January 25 Revolution, often calling it “Naksa” (a setback) or “Nakba” (a catastrophe) or even a conspiracy. Young people as a result are alienated, as many of them identify with the January revolution as an achievement of their generation. The police's heavy-handed handling of student protests and other demonstrations also angered many. Back in September 2013, I noted that the "June 30 alliance" could splinter if the state and the media continued to belittle and work against the January 25 Revolution's ideals and that the government, by excessively relying on security measures, was repeating the mistakes of its predecessors.

We have just provided estimates to show that a turnout of 17 million or 18 million voters should be considered reasonable, considering the situation at hand as well as past elections. Two days before the elections, Sisi, however, came out saying that he wanted to see 40 million voters! Frustration is always a function of the deficit between reality and exaggerated expectations. It seems that Sisi may have just presented his opponents with an easy victory on the turnout battle.

We also identified a number of errors Sisi made during his televised interviews, errors that indeed could have alienated potential supporters and undecided segments, thus giving millions of votes to his opponents: to Sabahi in protest votes, and the Muslim Brotherhood in millions boycotting the whole process as a result of his televised messages and format. On Friday, Sisi appeared again, this time in a televised interview with some 10 media figures. The interview, however, came in a very unusual setting that almost resembled a royal court where the king would sit on the throne surrounded by his retinue! In addition to the inappropriate setting, where Sisi looked like an already crowned pharaoh before elections even started, the choice of the media figures themselves was problematic to millions in the audience. Also the way they addressed Sisi, nodding their heads in admiration of his responses, as if he were a prophet carrying some heavenly wisdom that no one could debate, looked very provocative to many Egyptians and especially youth.

Announcing the expatriate vote count may have made the election battle fate appear to be already decided and some people could as a result have opted not to participate as they felt their votes would not change anything.

A controversial media guy, who had been strongly identified with the corruption of the old Mubarak regime, came out with the ridiculous warning that unless millions of Egyptians immediately go vote to rectify the low turnout situation, Sisi might abdicate the office! Should he win and not actually abdicate (!), Sisi should really do something about his media entourage. With friends like these speaking on Sisi’s behalf, the Brotherhood must be really pleased.

Sisi will most likely achieve a landslide victory despite all of this, but he has lost the turnout battle because of the fatal error of failing to prudently manage expectations. What this means for his presidency will depend on what he learns about Egyptians from today’s harsh lesson. And even if these feverish efforts succeed in boosting the turnout to meet the excessively high expectations, this battle is a reminder for those who suffer from short memories: No president, or media con artist, should ever take Egyptians for granted or treat them like children anymore. Ever.