The spoiler on Egypt’s elections

The preliminary results signal that the Sisi era is here, but don’t discount the January revolution after just three years. 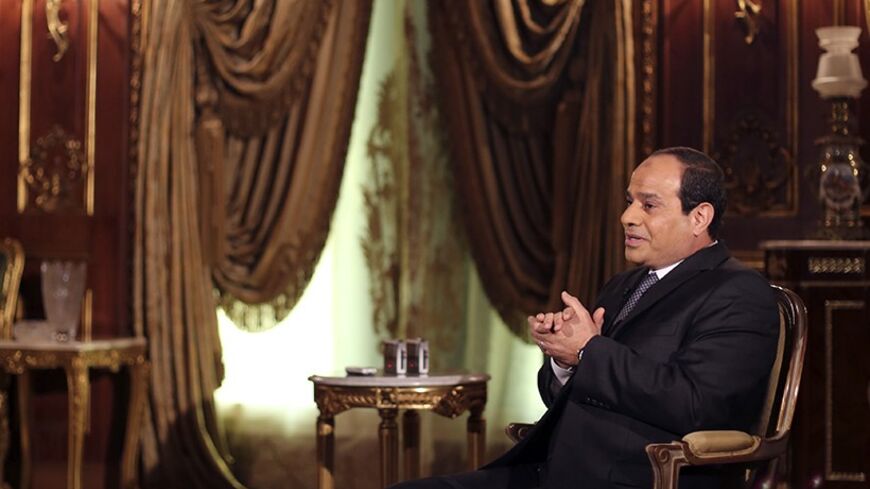 Former Egyptian army chief Abdel Fattah al-Sisi has achieved an overwhelming victory in the early (preliminary) results of the presidential election’s expat vote. The Election Commission announced that 318,033 Egyptians voted in Egyptian embassies and consulates around the world, which represents about half of those registered to vote. This turnout is higher than the 2012 elections, where only 306,000 voted, although the commission has this time canceled voting by mail due to fraud blamed on the Muslim Brotherhood in 2012. Sisi garnered 296,628 votes representing 94.5% of the valid votes, while 17,207 votes went to Hamdeen Sabahi, approximately 5.5% of the valid votes.

Sabahi’s campaign urged his supporters to stay the course saying that domestic voting will be the decisive factor in determining election results. As we predicted in a previous article, Sisi will achieve a landslide victory, and many Egyptians are already celebrating his “victory.”

To understand why this is happening, we have to delve into the collective mind of Egyptians who see this as an opportunity to fix the country’s affairs while there is a popular and strong president. I was on Egyptian State TV twice this week, and in both cases the show host frowned at me for giving my analysis that Egypt has already decided and that the election would only stamp the decision with an electorate seal. One of the programs was using the theme “Egypt decides,” and I said that it seems that Egypt has “already decided,” which did not please my host. It appears that state-owned media are trying their best to show neutrality, especially since many analysts already doubt the integrity of the election process.

The reality is, this is the Egyptian way of doing things. Egypt is a country of consensus. It is true that there is a portion of the voters who support, or once supported, the Muslim Brotherhood. But that bloc seems to be shrinking, at least for now, and the Muslim Brotherhood appears to be boycotting the elections anyway.

The Muslim Brotherhood usually gains many votes by massive mobilization during elections. With the group designated as a terrorist organization and thousands of its leaders in jail, its command structure, funding and logistical capacity are severely weakened.

Yesterday, a court verdict sentenced Hosni Mubarak, handing him three years in jail and his sons four years sentence each on embezzlement charges related to the presidential palaces case. This may lay to rest, at least for now, the rumors and speculations that Mubarak’s regime will soon be resurrected. Mubarak has been appearing in the news in the past few weeks and his supporters even celebrated his birthday on May 4. Activists saw this as a sign of a return to the bad old days, especially with fellow revolutionaries receiving cruel prison sentences for charges related to the controversially harsh demonstration law. The last of those sent to jail is Mahinour El Masry, a famous activist from Alexandria whose jail sentence was upheld by an Alexandria court that sent waves of protests amongst activists.

So, with this news and with an imminent victory for Sisi, what remains of the January 25 Revolution? We tend to forget the uneven nature of revolutions where change never seems to follow a straight line. It took more than 70 years for the French revolution to succeed in setting up the Third Republic. It took the American Revolution almost 90 years and a full-scale civil war before African-Americans obtained the right to vote. The January revolution has changed Egypt forever. With the Egyptian revolution only three years behind us, we can say with a great deal of certainty that no Egyptian president or government will ever again take the people for granted and hope to be left for long at the helm.

With the news of a coup in Thailand and Gen. Khalifa Hifter’s armed uprising in Libya, Egyptians are joking that coups are spreading because of Egypt and compare that to the year of 2011, in which TIME magazine named “The Protester” as Person of the Year in acknowledgement of protest movements that proliferated following Egypt’s (and Tunisia’s) revolution, and recalling how the Occupy Movement spread around the world, using icons and vocabulary that paid homage to Tahrir Square and January’s revolution.

Can the Brotherhood do something to derail the coming elections? The Ministry of Interior in Egypt announced uncovering some “cells” belonging to the Muslim Brotherhood, allegedly plotting to obstruct the coming elections in Behira and Assiut. But with 13,888 election stations and more than 50,000 ballot boxes, it is very difficult to do something on a sufficiently wide scale that can effectively disrupt the voting process. A terrorist group might even target Sisi himself, who said in a televised interview that two attempts on his life were uncovered. But Sisi only personifies a certain direction that the people chose and he followed. If he disappears from the picture for any reason, Egyptians are likely to choose someone else who will walk with them in the same direction, and not a Brotherhood sympathizer, let alone a Brotherhood leader.

Egyptians seem determined to go in that direction. The coming election is only a way to make it official. I am sorry if I spoiled the surprise, should you have been expecting any.