Sisi expects a comfortable win, while a boycott campaign may hurt Sabahi's chances. 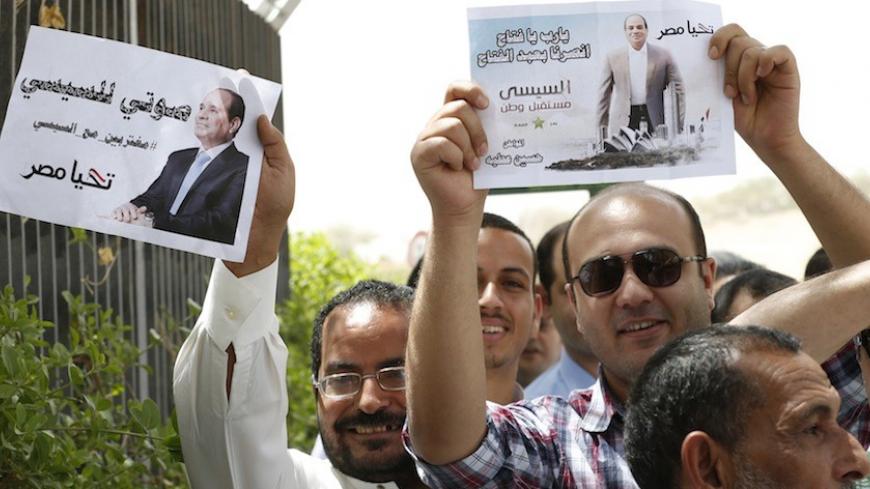 CAIRO — On Dec. 15, 2012, exactly 10 days after I witnessed Mohammed Morsi's supporters kill and torture their opposition in front of the presidential palace as the police and military watched silently, the Muslim Brotherhood's constitution was put to referendum. It passed by 63%, as millions boycotted.

The total turnout back then was 16.7 million out of 52 million registered voters, and if half the boycotters had voted no to the constitution they harshly criticized it would have easily lost — a result that could have tamed the arrogant Muslim Brotherhood movement and steered the wheel of Egyptian politics, which six months later witnessed Morsi's military-backed ouster and the country's tough plunge into further chaos and strife.

As we approach one more presidential election, millions seem to have not changed their minds or political tactics and are insisting on boycotting. The majority of boycotters this time are from the Muslim Brotherhood — with a 6 million solid voter front that endorsed Morsi in the first round of elections in 2012 — followed by the majority of Salafists, the revolutionary April 6 Movement and other sectors involving young people.

Despite the Muslim Brotherhood confirmation that it's boycotting the vote, unconfirmed reports quoting unnamed security officials claim that the Brotherhood is secretly planning to vote for Hamdeen Sabahi. Such reports are suspected of being an attempt to smear Sabahi by proposing his affiliation with the Brotherhood.

Meanwhile, Egyptians are set to vote May 26-27, and Abdel Fattah al-Sisi's win is expected to be as comfortable as the Brotherhood's constitution in 2012. Sisi, who ousted Morsi on July 3, 2013, is definitely facing harsh criticism and skyrocketing skepticism on the streets and on social media websites, but only a useless fraction of this loud opposition is actually translated into votes. On the other hand, Sabahi, the Nasserite figure and only opponent in the upcoming presidential race, will apparently be paying dearly for the mounting boycott campaign.

Al-Monitor met with Ahmed Abdelhadi, 31, and Amr Mohamed, 29, in downtown Cairo. Both Salafist men who work at internationally known information technology firms, they have no political affiliations but are intent on boycotting Sisi, Sabahi and the election process for a set of common reasons.

"I will never participate in a theatrical process that is held to entrench the position of one person. This coming election is just a show to claim that Egypt is a democracy while the reality is that it is following a military coup that killed thousands of people and both candidates agreed to it," said Mohamed.

"It's all serving Sisi while Sabahi is declaring his agreement to the killing of thousands of innocent people in the dispersal of pro-Morsi sit-ins; I believe that he is also serving Sisi," Mohamed said, referring to a televised comment by Sabahi, adding, "The dispersal of the armed Muslim Brotherhood sit-ins was essential and the Brotherhood leaders take blame for the bloodshed."

Abdelhadi's opinion was similar but more cynical about the future, even if Sabahi wins.

"I cannot trust Sabahi, who claims to be against Sisi; I believe that he wants to be in power and remain there," said Abdelhadi. "If we vote for him as a representative of the opposition and the revolution, I believe that he will do his best to please the military to entrench his rule, even if this means abandoning the revolution's demands and victims."

Abdelhadi says six out of 10 of his friends, family and colleagues are boycotting, while Mohamed says it's eight out of 10 in his community.

Both men, who continue to be fierce critics of Morsi and his performance, think of Sabahi, the only remaining presidential hope for the opposition at this point, as an opportunist who's only running for presidency to give himself credibility as an opposition leader under Sisi's presidency.

"Sabahi is seeking to become president and this is what he should be doing, that definitely doesn’t make him an opportunist. And he is an opposition leader and doesn’t have to prove it after decades of powerful political activity against consecutive regimes," said Abdelsattar el-Balshi, a lawyer and relentless foe of the Brotherhood who raised several legal cases against it during Morsi's time in power.

Balshi believes that boycotters should rethink their positions and plans. "If, hypothetically speaking, Sabahi comes to power, he will understand very well how powerful his opposition is, especially that he doesn't have the Brotherhood or the military backup." Boycotters, he believes, have rigid stances that never change no matter how many losses they score.

Those who did rethink their position seem to have given Egypt's political scene a more sophisticated and comprehensive study than the insistent boycotters.

Tarek Shalaby, a prominent figure of Egypt's Revolutionary Socialists Movement and a hard-core promoter of boycotting since the January 2011 revolution, has decided differently. He will vote for Sabahi.

"I am not supporting Hamdeen Sabahi or campaigning for him, I am just voting for him and I call everyone who is boycotting to do the same," Shalaby told Al-Monitor. "I will participate this time but I still believe in my stance in every past election I boycotted. This time is different."

Shalaby believes that, if Sisi wins Egypt's presidency, this will be the knockout for the revolutionary front and the opposition in general. "The street option was available in the past; now the game rules have changed. The protest law is applied to the fullest extent, the revolutionary leaders are in jail and Sisi has clearly said that he will not tolerate any protests or sit-ins, what we are living now will be multiplied when he comes to power."

"We are only giving him a stronger opportunity to do this if he wins with an overwhelming majority, which is what will happen if we boycott," said Shalaby, who believes that if Sabahi garners 15% of the vote, "it will be a minimal base of proven opposition that we all could unite through and capitalize on."

"If around 4 million people marched to delegate Sisi in July 2013 and his regime became that bold, what is he going to do if he scores the overwhelming majority of the vote?" Shalaby asked.