While much publicity has been on Abdel Fattah al-Sisi's failure to gain a high voter turnout, Egypt's opposition finds itself in a precarious state. 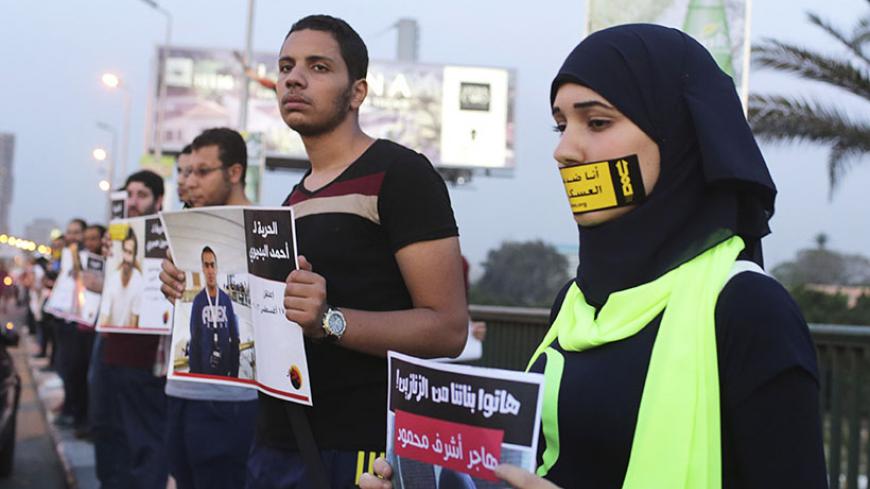 Protesters from the April 6 Youth Movement and other opposition activists form a human chain in Cairo to call for the release of activists in detention, April 16, 2014. - REUTERS/Asmaa Waguih

CAIRO — There are different ways to look at the preliminary results of Egypt’s presidential elections. One way is to view the turnout figures of 47.7% as a defeat to the regime. The extension of the vote for a third day and the mobilization of the media and state institutions could not deliver the 40 million or 74% voter turnout demanded by former Defense Minister Abdel Fattah al-Sisi.

“Results indicate that the street has broken the totalitarian base through which Sisi claimed people loved him,” said Amr Ali, coordinator of the April 6 Youth Movement, banned by a court order on April 28. “The opposition can raise their voice once again and talk to people on the street with more ease,” Ali told Al-Monitor. The group’s street activities now attract a few hundred people at best and are subject to attacks.

Ignoring that 23.9 million voted for Sisi and focusing on this subjective perception of a defeat doesn’t mean a victory for the opposition. “This is a glorious win for Sisi. Otherwise, we would be kidding ourselves,” said Yehia El-Gammal, assistant to the president of the Dostour (Constitution) Party, which backed Sisi’s only rival, Hamdeen Sabahi.

The numbers carry a humiliating defeat to the organized opposition forces that failed to mobilize voters for Sabahi. Despite his recurrent claims that he had a chance in the race, many only voted for him in the hopes of getting a number big enough to force a dissenting voice on an authoritarian regime and get an attentive ear from a nation that equates opposition with instability.

Sabahi garnered just over 750,000 of the votes, a major drop from the 4.8 million he got in the 2012 presidential race. When he conceded the elections on May 29, he remained resilient about his role in the future. “We started a road to build a democratic current that expresses people’s hopes. We will continue this road together.”

The numbers give him little chance of leading this unshaped opposition, whose scattered players struggle for recognition.

Even with the addition of spoiled ballots — not all 1.02 million of them were intentional protest votes — the official number that will be remembered and associated with organized political opposition, 7%, will always be too meager to back an influential player.

Adding an estimate of those who boycotted intentionally, not out of apathy, could create a bigger number that could legitimize the existence of the opposition: a total of 3-4 million, according to projections by several politicians Al-Monitor consulted. The figure may not be convincing to the skeptical public, but for Ahmed Imam, the spokesman of the Strong Egypt Party, which did not participate in the elections, it is the opposition’s critical mass. “The majority of these are youth with better mobility within the community and university campuses than any other sector,” he told Al-Monitor.

They would have potential if they avoided the mistakes of the older opposition leaders who failed to unite. The supporters of Mohamed ElBaradei and Abdel Moneim Aboul Fotouh (founder of Strong Egypt) have much more in common than their leaders, Imam said. Gammal also projected a similar alliance between the Constitution Party, founded by Baradei, Sabahi’s Popular Current and the Social Democratic Party. The real challenge is to form a solid coalition, he said.

It all comes down to whether those who boycotted or spoiled their ballots would actually participate in the process, said Nermine Shokry, youth secretary of the National Movement Party that backed Sisi. “Are these people part of a political party? … Are they stay-home opposition?”

The shape of this opposition remains vague, with no concrete scenarios that project the role of street action vis-a-vis political parties or the impact and involvement of the Islamist forces led by the Muslim Brotherhood.

Political parties will lack significance, said Islam Abdel-Rahman, former member of the Muslim Brotherhood’s Freedom and Justice Party. “The main influential players will be denied any access to the shallow political life, which will feed the escalation of street opposition despite the bloody crackdown.” The future, he said, will be in the hands of nonpartisan activists who can lead the street.

Going back to the street too soon would be a mistake, argued Ali, whose movement only banks on such tactics. “This is a new regime that needs caution. The methods and tools available to the opposition in the near future are not clear.”

The size of the opposition itself can only be estimated in six months, when the hype and media frenzy subside, Gammal said.

The political and social context that produced these results remains the reality that opposition forces hope to change. In that sense, the elections are irrelevant, argued Mohamed Naeem, founding member of the Social Democratic Party. The popular backing of a military takeover is not conducive to a political process, he told Al-Monitor. The low turnout adds to opposition woes because it reflects people’s disinterest in participation in general.

“Those who participated in the June 30 alliance wanted to create a new political scene. Since July 1, this alliance has been disintegrating under the guidance of the authority and the army,” he said. “There will be a period of hibernation.”

The sustainability of the security crackdown during and after this period is questionable and so is its impact on restricting dissent.

“All this oppression and blood failed to unite groups. It also failed to silence opposition,” Imam said. Politicians close to the regime use the stigma now associated with the Brotherhood to further vilify other opposition forces, who often find themselves cornered into rejecting alliances with the Islamists.

“The Muslim Brotherhood’s goal is to exhaust the regime, our opposition is to fix the situation. There’s no common ground to work on with them,” Imam said.

The Freedome and Justice Party's Abdel-Rahman said, “[There is a] lack of trust between the secular political forces, who for ideological causes refuse the Islamists and accuse them of being exclusive, and the Islamist forces who accuse the secular ones of giving cover and support for the military for the bloodshed.” He, however, sees an opportunity for change, “especially with the absence of [the Brotherhood’s] traditional leadership and the promotion of many youth to leadership slots.”