Is Israel's 'startup nation' a mirage?

In an interview with Al-Monitor, economist Dan Ben-David warns that despite Israel's world-leading high-tech, its productivity remains among the lowest in the developed world, threatening rate of growth and quality of life. 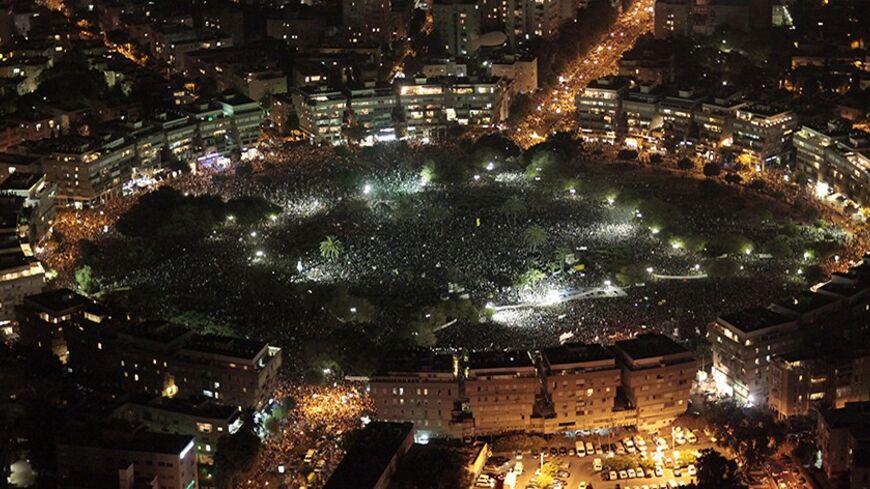 Professor Dan Ben-David, a noted economist, has been observing Israel’s socioeconomic policies and studying their long-term implications with consternation for more than two decades. Over the last six years, serving as the executive director of the Taub Center for Social Policy Studies in Israel, his insight by which the Zionist project could ''end in tears'' has been deepening. He feels that ''the window of opportunity enabling us to save the state from collapse is getting smaller, as we reach the point of no return.''

In an interview with Al-Monitor, Ben-David explains why the path that the State of Israel is following in its 66th year will eventually lead to the system's collapse. He talks about why programs such as zero percent VAT on the purchase of new apartments or cell phone reform cannot reverse the trend, but also why he still maintains a certain degree of optimism: “I don’t believe that my generation will allow this country to collapse, after our parents’ generation built it.”

Al-Monitor:  How is it possible that an economic powerhouse like Israel, the “startup nation,” could just collapse?

Ben-David:  When I deal with the socioeconomic aspect of Israel, I have the feeling that we’re letting the country slip through our fingers. It’s ironic. On the one hand, this really is the “startup nation.” We are on the forefront of developments in high-tech and medicine. At the same time, however, there is another country here. What we have, in effect, is two countries. We track productivity rates in Israel, and based on the data, productivity here is among the lowest in the developed world. Obviously, that has implications on growth and quality of life. All the OECD [Organization for Economic Co-operation and Development] states beat us in that.

It is important to understand that this is a trend. It is a process that began in the 1970s, so it is possible to say that we have been in decline for the past 40 years. If, in the 1950s and 1960s, we were able to reduce the gaps between us and the world’s leading countries, the trend has reversed itself since then.

That means that even when there are people who live here and who want to live here, there will also be people who leave because they can get more somewhere else. We are passing the threshold in which more and more people will not want to live here, and that could end in tears. We have to ask ourselves where our children and grandchildren will be. It is true that we are not talking about major calamities in the next year or two. We still have time to make changes and fix the problems, but that time is running out.

The other aspect of the problem is inequality and poverty. Poverty rates in Israel are among the highest in the developed world. Of course, these two things are interconnected. If, in the 1950s and 1960s, we were an example to the West of how a country does things the right way, we have since become one of the least egalitarian countries in the world.

Al-Monitor:  Your research maps out the reasons for that. What is the main reason?

Ben-David:  Behind the inequality and low productivity, we find a growing population that did not receive the tools it needed from the state to integrate into the modern workforce. By this, I mostly mean the Arab and ultra-Orthodox sectors. Their situation has a negative impact on productivity. In an economy where productivity is low, it is impossible for wages to be high. When productivity in an entire country is very, very low, it says something about that country’s ability to offer high wages. The population that continues to grow lacks the tools and condition to integrate into the market. What is needed to understand the reasons for this is to take a look at the level of the country's education in the core subjects. Since the 1990s, the State of Israel’s achievements in international mathematics and reading tests are among the lowest in the developed world, and we can’t seem to overcome that.

Al-Monitor:  Is it all because of the ultra-Orthodox and the Arabs?

Ben-David:  The issue is that this is true even if we don’t include the ultra-Orthodox, because their children do not participate in international testing. In other words, if they were included in the test results, the situation here would be even more dismal. When we look at the achievements of Arab children, we see that the level of education we provide them in core subjects is beneath what they would get in developing countries. That has enormous implications, because if we consider the demographics, we see that almost half the children in this country are either ultra-Orthodox or Arab. When they will grow older, they will increase the percentage of the population that is unable to participate in the workforce. Productivity will then decrease and existing gaps will expand. It is the responsibility of the state to reach these children and provide them with the tools they need.

Al-Monitor:  The social protests tended to focus on black versus white, tycoons versus the poor. Could that have been part of where they missed out? Because what you are describing is a systematic failure to deal with fundamental issues.

Ben-David:  In my opinion, what happened during the social protests was super-positive, and it was expressed also in the elections. Anyone who emphasized the “normal” [diplomatic] issues got less votes, while anyone who focused on socioeconomic changes, from [Economy and Trade Minister] Naftali Bennett to [Former Labor Chair] Shelly Yachimovich and the Yesh Atid Party, got more votes. That’s a sign that things are starting to click.

But that is not enough, because we are still not dealing with the core problems. So, for example, housing is just the tip of the iceberg of more general problems. If we look at what is causing the housing problem, we tend to focus on the most commonly cited causes, like the state’s monopoly on land and its rising cost. But while that certainly has an impact, it is not the main story. If we want to deal with the root of the housing problem, then we have to perform an actual root canal, rather than dabble in cosmetic treatment of the main problems.

Al-Monitor:  What are those problems?

Al-Monitor:  Will the zero percent VAT program and targeted pricing when purchasing an apartment change anything in the housing market?

Ben-David:  No, it’s not the solution, because it doesn’t deal with the core problem. We go for the easy way when we go after one particular group or other.

It’s not as if there are no tycoons and no super-poor, but they are not the main story. The main story is that there are gaps among us, among the part of the country that is not ultra-Orthodox or Arab. If we just look at the middle class, we find that the gap between its two extremes is among the highest in the Western world. Gaps in education hint at what will happen once children grow up, because all of this will be expressed later on as gaps in income.

Al-Monitor:  Ostensibly, this government is behind a record number of reforms: in the ports, in the Broadcast Authority, in the delineation of municipal boundaries and in reducing housing costs. It seems as if we’re riding a wave of structural reforms.

Ben-David:  That is actually incorrect. We’re riding a wave of marketing. Not every wage agreement is a reform. We are avoiding any dealing with the core problems. We, the Israelis, believe that everything will work itself out. Apparently, it’s part of our nature. There have been some changes in the past decade, and it is all starting to click for quite a few people, but what is happening now is that we are treating the symptoms without treating the actual problems.

What is needed here is systematic treatment of the problems of the kind that the prime minister must lead, together with his Cabinet. What is needed is a comprehensive master plan, because we are in a race against time. The current Knesset has the ability to introduce policies that would change the direction of the next Knesset, and perhaps, of the next one or two Knessets after that. When it comes to solving the fundamental problems, the differences between [Justice Minister Tzipi] Livni, [Finance Minister Yair] Lapid and Bennett are not that great, and as hard as it is now, once we reach a certain point it will become absolutely impossible to do anything. We will reach the point of no return.

Al-Monitor:  When will that happen?

Ben-David:  When it comes to the ultra-Orthodox, the main emphasis should be on educating their children. There is no modern country apart from Israel that allows parents to prevent their children from receiving the education they need. There are things that every child must know.

Al-Monitor:  You didn’t mention the diplomatic process as part of the solution.

Ben-David:  Obviously, if we could resolve that issue, it would make everything else much easier. But if we wait until the issue is resolved, we will lose the country. There is no reason why we cannot deal with the external problem in an ongoing manner, while completely isolating it from the internal problems we face.

Al-Monitor:  And yet, despite everything, you still sound optimistic.

Ben-David:  Because it really has clicked. Many people here feel that the situation cannot go on this way. There is a window of opportunity. This is a [pioneer] Ben Gurion-like era, in which difficult decisions must be made. I believe that we’ll do the right thing. I refuse to believe that my generation will allow this country to collapse, after our parents’ generation built it. I believe that we will do it because we can. We have the knowledge, and there is a flow of money.