The absence of the ultra-Orthodox from Israel's job market is a real threat to the state, but the aggressive attempts by Finance Minister Yair Lapid to solve the wrong problem will have the opposite effect. 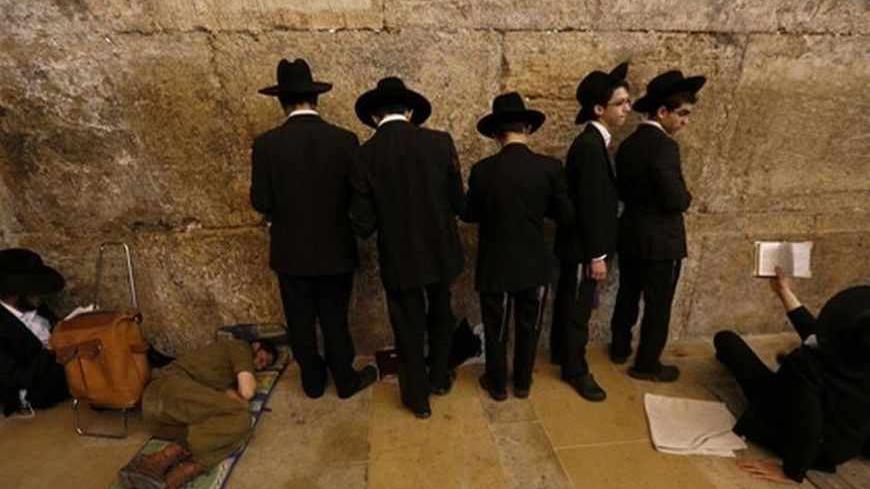 The most frightening man in the state of Israel is probably professor Dan Ben-David of Tel Aviv University. Ben-David, a renowned economics lecturer, is actually a pleasant and affable individual, but the message he bears should be disquieting for any Israeli concerned with the future of his country. As executive director of the Taub Center of Social Policy Studies, Ben-David goes around the lecture circuit and meets people all over the country, illustrating with the help of diagrams and dry statistical data the extent to which the survival of the state of Israel cannot be taken for granted.

The data reveals the annual rate of increase in the number of Israelis who do not participate in the workforce. They are not listed as unemployed because they're not even looking for work. Most of them are ultra-Orthodox. As the percentage of ultra-Orthodox in the population grows — and it has been growing steadily and speedily — the percentage of productive Israelis participating in the workforce grows smaller. Ben-David concludes that given the current state of things, the Israeli economy will soon no longer be able to continue to support the non-working ultra-Orthodox population. Quality of life in Israel is relatively high, but it could have been far higher had there not been an entire sector that has — for years — refrained from joining the job market out of a rigid religious ideology. Unless a radical change takes place, Israel is marching toward the edge of an abyss. The system that has been in place for 65 years simply cannot be viable for much longer.

The public debate in Israel regarding the integration into society of the ultra-Orthodox Jews hardly deals with this issue. The focal point is always “sharing the [military] burden” — the same worn slogan that has long since become a sure springboard for any secular politician wishing to gain popularity. The last one to make use of it was the Yesh Atid chairman, Finance Minister Yair Lapid. Since forming his party at the beginning of 2012, Lapid was careful to declare that he has nothing against the ultra-Orthodox and that, unlike his late father — former Knesset member Tommy Lapid, who headed the Shinui party in the previous decade — his party would not be anti-clerical. The plan for drafting the ultra-Orthodox into the army, which he presented at the start of the election campaign, focused first and foremost on getting the ultra-Orthodox into the job market and only then integrating them into military and national service.

But then — somewhere in the middle of the campaign — Yesh Atid faced a crisis. The polls indicated a decline in support and the strategic advisers decided to hone the message. Lapid, who up until then had spoken about a variety of issues on the agenda, started focusing on the ultra-Orthodox and repeating the “shared burden” refrain. This move paid off when he raked in 19 Knesset seats in the elections in January 2013, becoming the head of the second largest party, after the Likud. Today, too, even as he is attacked for an austerity budget which he has been pushing as finance minister, Lapid still gets positive feedback whenever he criticizes the ultra-Orthodox. In virtually every speech he delivers from the Knesset podium, a significant part of his comments is devoted to attacking the ultra-Orthodox. That’s his comfort zone.

On July 23, the Knesset gave initial approval to the government’s plan, led by Yesh Atid’s cabinet member, Minister of Science and Technology Yaakov Perry, for drafting ultra-Orthodox men into the military. Public attention was focused on the blatant provocations acted out by some ultra-Orthodox Knesset members during the stormy debate. But all the shouting notwithstanding, data presented in his Knesset speech by ultra-Orthodox Shas Party Chairman Aryeh Deri stood out. According to his data, since the beginning of the year, the rate of ultra-Orthodox enlistment has dropped 30%. After years of a slow, quiet increase in the number of ultra-Orthodox who don uniforms, the trend has turned around. This occurred at the same time as the public debate on the issue was heating up and Yair Lapid was enjoying his meteoric rise. The more Lapid spoke about ultra-Orthodox enlistment, the more the number of recruits declined.

In recent months, since the formation of the new government which raised the “shared burden” banner, there has been a rise in attacks by members of the ultra-Orthodox community on those among them who decide to trade in their religious studies at the yeshiva (religious institution) for military service. In several recent incidents, policemen were forced to extricate soldiers wearing kipas (skullcaps) who were attacked while walking around ultra-Orthodox neighborhoods. These phenomena did not exist a year ago. The “shared burden” campaign benefited Yair Lapid, but diminished the chance that equality would be achieved.

It is worth believing ultra-Orthodox Knesset member Meir Porush of Yahadut HaTorah, when he chained himself to the Knesset podium and declared that this is how yeshiva students would be led — in chains — if forced to enlist. The firm stand against the government was the basis of the ultra-Orthodox ethos even before the State of Israel was established, when the Jews were scattered in communities throughout Europe. It was only three years ago that dozens of ultra-Orthodox parents in the West Bank settlement of Immanuel opted to obey their rabbis and go to jail rather than comply with the instructions of a secular court regarding the integration of Sephardic schoolgirls into the local religious seminary.

The ultra-Orthodox have earned the Israeli street’s hostility toward them after decades of isolation and seclusion. There’s no justice in their continued refusal to take part in efforts to sustain and advance the State of Israel. But an attempt to resolve a generations-old problem by brandishing a sword, and with forcefulness, will achieve the opposite result.

Instead of fighting them, it would have been better to move forward slowly, in cooperation with the ultra-Orthodox, to achieve the declared goal. The alternative of the continued ultra-Orthodox isolation and the status quo is simply too dangerous for Israel.