After being re-elected and before beginning the task of forming a coalition, Prime Minister Benjamin Netanyahu would do well to redefine his goals and his vision for his third term in office, writes Nadav Perry. 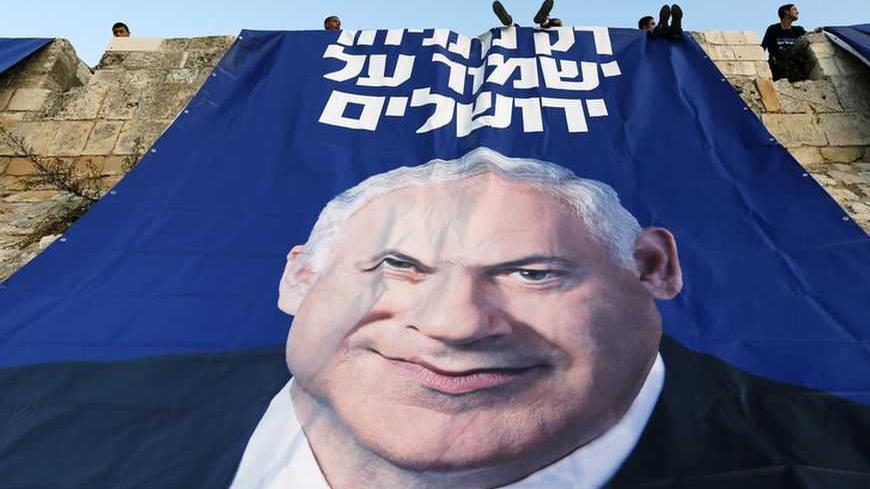 So, who will Prime Minister Benjamin Netanyahu call first right after learning the election results? Evidently no one. Prime ministers who are reelected do not make phone calls; they receive them. Perhaps it would be best for Netanyahu, assuming reasonably that he will be re-elected, to wait a bit before making time for phone calls and other distractions and dedicate a few minutes to himself and his own thoughts.

Knesset Speaker Reuven Rivlin said, in an interview, that after two terms in the nation’s highest post, during which there were no earthshaking developments, Netanyahu will want to make his mark on history during his third term. After all, if he doesn’t make history now, he never will. And the right time for him to do so is immediately after the elections, before he begins the task of building a coalition. The first step is defining objectives: In this past term, he wanted to renew the freeze on construction in the settlements, but wavered due to pressure from his coalition partners. He was leaning towards apologizing to Turkey for the Marmara events, but didn’t because of his coalition partners. Time and time again, he cast a fearful glance at his “natural partners” whenever he reached a dramatic crossroads. This time, it would be better if he first asks himself what he wants to achieve during this term and only then begin forming a coalition that will enable him to do so.

Only then will he be able to make time for the phone calls. I can think of three people who will make themselves available and will be able to help him define priorities.

The first is the Governor of the Bank of Israel, Stanley Fischer, the man whose suggestions Netanyahu for the most part ignored last year. At the beginning of last year, Fischer warned against expanding national debt. He opposed increasing the deficit target, but the government increased it. He begged for the passage of a new state budget, but instead, Netanyahu moved up the elections. When talking to Fischer, he could talk about ways to reduce the deficit, but also about other issues. Should he adhere to the policy of a biennial budget, which while making life in the Knesset much simpler, also makes responding to changing economic realities difficult? What policy would encourage foreign investors to bet on the Israeli economy and what needs to be done to bring new populations into the labor force?

When he finishes speaking to Fischer, it would behoove Netanyahu to call Dan Ben-David, Executive Director of the Taub Center for Social Policy Studies in Israel. A single conversation with Ben-David could be far more frightening than 100 speeches by Iranian President Mahmoud Ahmadinejad and Secretary General of Hezbollah Hassan Nasrallah together. In his studies and lectures, he demonstrates how the policies of Israeli governments over the years endanger the existence of the state. He uses several diagrams and simple graphs that illustrate how within just a few years, it will no longer be economically possible to maintain the country in its current form: a productive backbone with low birth rates that is shrinking, as opposed to a nonproductive public that is continually growing. In this conversation, it might be best for Ben-David to use a story that Netanyahu is all too familiar with: about the thin man who carries the fat man (the ultra-Orthodox man, in this case) on his back. More important than the question of whether the fat man should put on a uniform and enlist in the army is the possibility that he simply goes on a diet and provides for his family just before “the whole thing collapses.”

After these two calls, the prime minister will need to take a deep breath and make an unavoidable trans-Atlantic call: to Uncle Sam in Washington.

Most of the reports on tension and hostility in the relationship have completely forgotten the fact that for most of his years on the job, President Barack Obama refrained from putting pressure on Netanyahu. In fact, only during his first year as president did he issue his edicts. That year he gave his Cairo Speech, which was viewed by Israel as turning his back. It led Netanyahu to make his Bar-Ilan Speech on a two-state solution and commit to a freeze on construction in the settlements. He then turned his attention to the midterm elections, and later dedicated all his energies to being reelected.

Now the US president has all the time in the world to put the pressure on Jerusalem. Therefore, Netanyahu would do well to do what he did not deal with at the beginning of his previous term (and it might even be too late for that now); an honest and real conversation to align expectations that could reset the relationship and perhaps have an impact on the course of his term in office.

Of the 12 prime ministers in Israel’s history, Netanyahu is already ranked second in terms of the total time in office. Two months ago, he passed late Prime Minister Yitzhak Shamir. Only the first Israeli Prime Minister, the late David Ben-Gurion, outranks him with 13 years as prime minister. Consider this: between Shamir and Ben-Gurion. One is the symbol of stagnation and intransigence, and the other a pioneer who was not afraid of making revolutionary decisions.

If he doesn’t become more like Ben-Gurion in his third term, he will be engrained in the Israeli collective memory as the 21st century’s Yitzhak Shamir.