The ultra-Orthodox draft law proposes a gradual enlistment process, which will not lead to an equal sharing of the burden, but will help the ultra-Orthodox overcome the obstacles between them and the modern world. 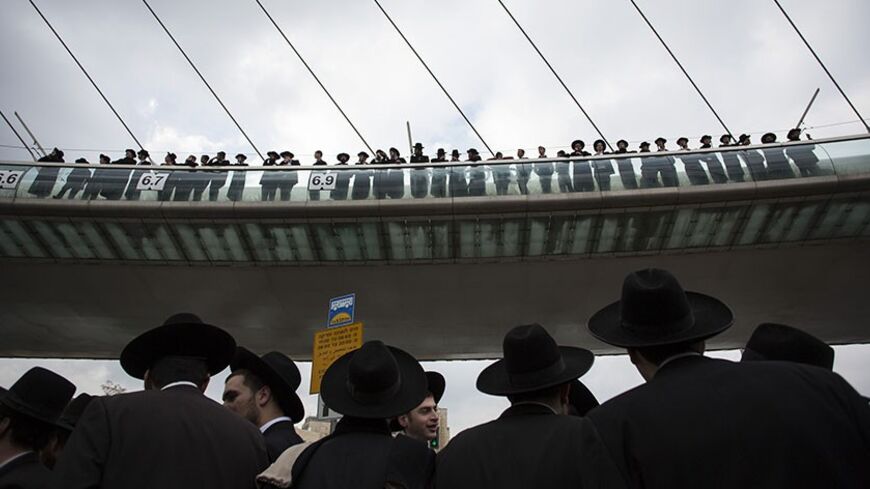 When the Jewish state was established in 1948, founder and first Prime Minister David Ben-Gurion promised to allow some 400 rabbinical college students of military age to continue studying the Torah without interruption. They would not be drafted into the Israel Defense Forces (IDF) like any other young Israeli, and they would not have the same normal obligations incumbent upon other citizens of the young state, which fought for its survival from the moment it was born.

At the time, Ben-Gurion had many other problems to deal with, including five Arab countries that attacked the Jewish state to destroy it. His historic promise wasn’t considered to be a genuine problem. No one imagined that within a generation or two, the number of people studying the Torah would double, triple, quadruple, and continue to soar at an exponential rate. Today, each class of young ultra-Orthodox Jews of draft age, numbers 15,000 rabbinical college students. Since military service in the IDF lasts three years (for men), the number of ultra-Orthodox Jews who should be serving in the IDF at any given moment is around 45,000. The reality is that the number of those actually serving is between 1,500 and 2,000, who are taking part in several fascinating tracks created especially for them in the Intelligence Corps and the Air Force.

Some 66 years after the founding of the state, the ultra-Orthodox have become a strategic threat to Israel, the country in which they live. Once a negligible population, numbering in the tens of thousands, they now make up about 1 million people. The Grade One class (6-year-olds) in the Israeli education system now consists of 50% ultra-Orthodox Jews and Arab Israelis, the two minorities that are about to become a majority. The population that serves, contributes and joins the workforce in Israel is losing its weight among the population. Once, secular Jews were a majority. Today, they are a minority.

Fortunately, the people in the knitted yarmulkes, affiliated with religious Zionism, serve and contribute disproportionately to their percentage of the population, but that doesn’t change the numbers or alleviate the concern. Arabs and ultra-Orthodox Jews rarely enlist to the army, resulting in a situation in which half of the country’s young people are not counted by the army in any given recruitment cycle. The IDF was once known as the “People’s Army.” Now it is “Half the People’s Army.” In another decade or two, it won’t even be that. Failing to serve was once a rarity. Today, it is a tangible and significant threat.

The rate of natural increase among Israel’s ultra-Orthodox population is enormous. Today in Israel, elderly Jews with something like 100 children and grandchildren are fairly easy to find. The calculation is simple: They have about 10 children, and each of those children has about 10 children of his own. This is not some rare spectacle. It is the reality. Israel is a fertile country with a high birthrate. The problem is dealing with a reality in which the most fertile sector does not bear its share of the security burden and whose rate of participation in the workforce is much lower than necessary. According to senior economists and authorities in Israeli academia, this is a ticking time bomb that constitutes an “existential threat” to the Jewish state's welfare.

There has been a change over the past few years. The pace isn’t fast enough yet, but the direction is clear. The rate of participation in the workforce among ultra-Orthodox men jumped from something like 35% to around 45%. That is still very low. Ultra-Orthodox men still prefer to study the Torah in the various rabbinical colleges and rely on the work of their wives, who earn the minimum wage and at the same time raise their many children. Added to this meager salary are the stipends paid to them from the state coffers and various charity and mutual aid organizations, which are especially well-developed in the ultra-Orthodox community. A large segment of the ultra-Orthodox population in Israel lives in dire poverty, but their motivation to extricate themselves from it is not particularly high. The real goal in life, among the ultra-Orthodox, is not to earn a fortune, amass material possessions and maintain a high standard of living. It is to reach achievements in the study of the Torah.

Despite all of the above, change is certainly underway. The ultra-Orthodox in Israel are starting to open up to the outside world. They are feeling their way, reluctantly and fearfully, into the 21st century.

On Feb. 19, a special Knesset committee approved the new “Sharing the Burden Law,” which is supposed to correct the severe distortion concerning the division of IDF service between segments of the population, and which bears clear implications on participation in the workforce. Finance Minister and Chairman of the Yesh Atid Party Yair Lapid made a campaign promise to ensure that young ultra-Orthodox men receive the same treatment as their secular brothers and are drafted into the army just like them. Lapid failed to keep this promise, because it would be impossible to implement without getting into a Ukraine-style civil war.

What did pass is a proportional and gradual law that increases the rate of ultra-Orthodox Jews drafted into the IDF in stages and sets a target date after which they would be faced with the same criminal sanctions imposed on any other young Israeli who avoided military service, unless the community met the recruitment rates allotted to it from the beginning.

It sounds complicated because it is complicated. It has already been mentioned that this will not lead to any sharing of the burden. When it reaches its optimal level, the law will result in about one-third of those young people of recruitment age being drafted into the IDF or some alternative national service. It is far from the numbers of people recruited in the other sectors, but it is not a bad beginning.

The law’s greatest impact is expected to be economic and social. Ultra-Orthodox Jews who serve in the military go on to join the workforce in impressive numbers. Until the current law was passed, young ultra-Orthodox Jews were “imprisoned” in their rabbinical colleges and unable to join the workforce at all. They received a deferral and exemption from serving in the IDF because they were studying in a rabbinical college. Anyone who considered leaving was drafted into the army. Now tens of thousands of young ultra-Orthodox men who are trapped in this bizarre situation will receive an all-inclusive exemption and join the workforce at once. At the same time, the next generation of young people who enter this circle will not be forced to choose between military service and sitting in a rabbinical college (in a yeshiva, a ''sitting'' in Hebrew). The system will be more attentive to them and provide these young people with the more organized options of either studying the Torah, serving in the IDF or entering the workforce.

Experts in Israel hope that this law will help the ultra-Orthodox overcome the obstacles that still separate them from the modern world. The law has the potential and offers the hope that it will indeed provide the goods. At the same time, however, it must not be forgotten: The main obstacle keeping the ultra-Orthodox from military service and the workforce is an emotional obstacle. They are worried that exposure to the modern world will cause many of them to abandon Orthodoxy. As far as they are concerned, studying the Torah 20 hours a day is even more important to the Jewish people than serving in the military or contributing to the economy. It will take time before they are convinced that the two things do not contradict one another. What has happened meanwhile is that the ultra-Orthodox have realized, for the very first time, that the current situation can’t go on like this forever.