Why Israel's ultra-Orthodox mainstream worries about its image 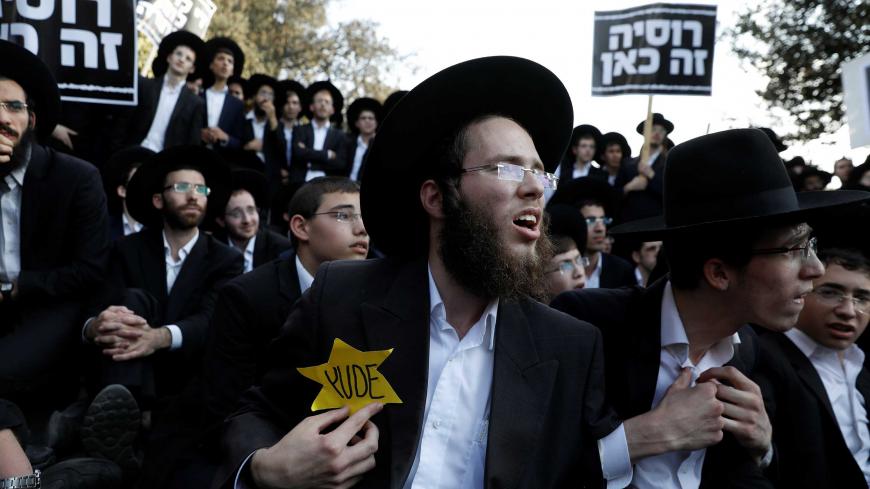 Ultra-Orthodox Jewish men sit on a road as they try to block it during a protest in Jerusalem, Oct. 23, 2017. The demonstrators wear yellow stars such as Jews had to wear in Nazi Germany, saying the demand that they serve in the military is a "Nazi decree." - REUTERS/Ronen Zvulun

Oct. 23 was a real nightmare for drivers in Jerusalem. Alongside demonstrations by the disabled and others, dozens of ultra-Orthodox Jews from the "Jerusalem faction" blocked the entrance to the city. They fought with the police and even shattered the windshield of an Egged bus.

The Jerusalem faction consists of ultra-Orthodox who split from the main Lithuanian faction five years ago. Their leader is Rabbi Shmuel Auerbach, who lives in Jerusalem — hence their name. The main debate between them and the rest of the ultra-Orthodox world is their refusal to show up in military recruitment centers to receive an exemption from military service. According to an arrangement with the Ministry of Defense, yeshiva students who declare that "Torah study is their profession" must show up at the recruitment centers to declare that they have devoted their lives to Torah study. Their enlistment is then deferred, and this effectively becomes an exemption.

When they reach draft age, most young ultra-Orthodox men do this. On the other hand, Rabbi Auerbach's followers, who constitute just a few percent of the 800,000 ultra-Orthodox Jews living in Israel (according to the Central Bureau of Statistics), claim that even going to the recruitment office is a violation of Jewish law. They call it a desecration of God's name and a waste of valuable time that could be used to study Torah. They are joined in their struggle by the Eida HaHaredit, who are considered anti-Zionist. The Eida HaHaredit also boycotts elections and considers the State of Israel and its leaders to be their enemies.

In September, ultra-Orthodox demonstrated against the Israel Defense Force's (IDF) arrest of a youngster who did not show up at the recruitment office and was thus classified as a deserter. In the past two weeks, the Jerusalem faction intensified its struggle following the arrest Oct. 16 of more yeshiva students. Demonstrations and the blocking of roads have since become an almost daily occurrence.

As this was happening, the mainstream faction of the ultra-Orthodox community intensified its condemnation of the demonstrators. On Oct. 9, Knesset member Moshe Gafni spoke out at a Degel HaTorah party conference, claiming that the real reason for these demonstrations is the Jerusalem faction's failure to get representation on the ultra-Orthodox party's Knesset list.

In this internecine ultra-Orthodox conflict, both sides also use the Holocaust to bolster their arguments. Demonstrators representing the "faction" wear yellow stars at their demonstrations and describe the demand that they serve in the military as a "Nazi decree." In contrast, one of their sharpest opponents, Rabbi Yisrael Rosen, said they are using the same kind of propaganda that he would expect from Goebbels.

In most cases, the ultra-Orthodox communities prefer to wash their dirty laundry in private. This time, however, the conflict has reached all the way to the secular media. In an interview with Army Radio on Oct. 24, Knesset member Yaakov Asher of Yahadut HaTorah stated that he finds it remarkable that these extremists from the Jerusalem faction share an interest with secular Yesh Atid leader Yair Lapid, since both of them use the Enlistment Law for their personal and political needs, and that this causes an unnecessary rift in Israeli society. Interviewed by Radio Kol BaRama, Knesset member Asher added, "These demonstrations cause a huge desecration of God's name and harm the entire ultra-Orthodox community and not just Degel HaTorah. We dissociate ourselves from them and have nothing to do with them.’’ Asher was one of the few ultra-Orthodox Knesset members to break silence over the Jerusalem faction's demonstrations. As he explained, "We are not happy about attacking our brothers, some of whom studied with us in yeshiva. But as soon as members of our community tarnish the reputation of all of us, we can no longer be silent."

The ultra-Orthodox sector's general opposition to these demonstrations is evidence of their serious concern about how this might damage the sector's status and its relationship with the state. This, in turn, could affect budgetary allocations to yeshivas, as well as key issues such as conversion and the Western Wall compromise. The ultra-Orthodox leadership worries that the extreme approach to the struggle by Rabbi Auerbach and his supporters will revive the negative characterization of the ultra-Orthodox as parasites who receive tax money from secular Israel but do not share in the burden of military service.

A senior ultra-Orthodox politician told Al-Monitor that the demonstrations cause enormous problems to efforts to amend the Recruitment Law by enacting legislation to formalize the ultra-Orthodox exemption from military service, which was overturned by the Supreme Court last month. He added that given the overall mood caused by these demonstrations, the ultra-Orthodox will have to deal with growing opposition to the amended Recruitment Law, not only among the Knesset opposition, but even among coalition partners whose support is necessary to complete the legislative process. He noted that Yisrael Beitenu, the secular party popular among immigrants from the former Soviet Union, and the Kulanu Party are just waiting for a chance to show their voters that they are fighting against the special benefits received by the ultra-Orthodox. According to that same politician, the Jerusalem faction has provided them with an excellent weapon.

Ultra-Orthodox politicians will not admit it, but the fierce opposition of most ultra-Orthodox Jews to these demonstrations can also be attributed to their desire to be a part of Israeli society in general, and the very visible process of integration that has been occurring over the past few years. In the ultra-Orthodox street, demonstrators from the Jerusalem faction are commonly referred to as hargasim, the Hebrew acronym for "crude ultra-Orthodox." Anger and resentment of them has a lot to do with image. The driver stuck in traffic, like most secular Jews in Israel, will not distinguish between members of the Jerusalem faction and other ultra-Orthodox Jews, and his anger will extend to the entire sector. Yitzhak Nahshoni, a prominent ultra-Orthodox journalist, posted a brief video clip on Twitter showing the clash between demonstrators and drivers. He tweeted: "Horrified and in tears over the damage caused."

Another well-known ultra-Orthodox journalist who spoke with Al-Monitor on condition of anonymity added, "Everything we worked so hard to achieve — the bridges we built, the ties we forged, the growing understanding of the character and needs of ultra-Orthodox society — all of these are being erased by holding a demonstration and acting irresponsibly by blocking roads."

Recently, that ultra-Orthodox journalist has been giving numerous interviews to the general secular press, in which he tries to explain that the groups blocking the roads represent an extremist faction. He isn’t always successful. One of the reasons for this is that in these interviews, questions are raised about the main points of contention between secular and ultra-Orthodox Jews, with compulsory military service chief among them. While the past few years have seen a 15% rise in the number of ultra-Orthodox men who enlist — so that there are now some 7,000 ultra-Orthodox soldiers in the IDF, many of them in combat roles — most young ultra-Orthodox men do not serve in the army at all and, as a result, fail to integrate into the workforce. Furthermore, the fact that the current government has increased budgets allocated to yeshiva students has led to a decline in the number of ultra-Orthodox men who actually work, or in other words, who have integrated into Israeli society.

What this means is that ultra-Orthodox criticism of the Jerusalem faction may be in place, but it fails to compensate for the fact that the sector's leadership still advocates that their followers remain in their self-imposed ghettos instead of integrating into society.