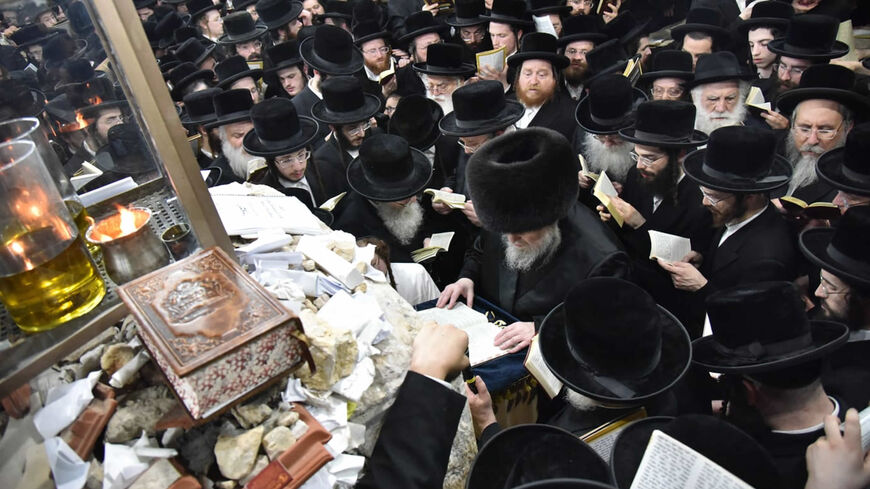 The Beltz rabbi with his followers at Yeshiva Hall, Jerusalem, May 2022. - Mamlechet

An interesting question reached the court recently. The plaintiffs were young people who had left the ultra-Orthodox path and sued the Israeli government, accusing it of failing to mandate the ultra-Orthodox education system to include general secular education, especially math and English, in its curricula. According to the youth, if they seek to gain higher education they must close learning gaps, and they accuse the state of not ensuring their education.

The suit brought against the state was dismissed. The state claimed that the suit should have been aimed at the parents, since they are the ones who denied their children education by sending them to ultra-Orthodox institutions rather than the public schools available to them.

Over the years, government coalitions that did not include ultra-Orthodox parties systematically tried to condition the inclusion of general education for the allocation of government funds. However, when the ultra-Orthodox had control in the government, they succeeded in separating the demand for secular education from the budget.

Now, we discover, there is an opposite phenomenon: Ultra-Orthodox parents with children in ultra-Orthodox schools are demanding to let their children learn secular subjects.

This demand is loudly heard today from parents of all streams in the ultra-Orthodox community, even those from more Hassidic and conservative streams, not just those ultra-Orthodox circles considered more modern. Parents are demanding that ultra-Orthodox institutions include secular subjects like English and math in curricula, so that when the time comes, after they marry and finish their studies in the Kollel (yeshiva for Torah and Talmud studies), their children could learn a profession without obstacles that prevent them from closing educational gaps.

“We’re talking about basic studies, such as those I learned as a child in the kheyder [ultra-Orthodox elementary school],” a Jerusalem-based father of six children enrolled at esteemed ultra-Orthodox schools told Al-Monitor on condition of anonymity.

He said, “Besides very basic math and very basic Hebrew they learn nothing today, while as a child I learned arithmetic, math, English, even geography and engineering, without taking away from sacred [Torah] studies.”

He noted, “We are really not asking that the children learn subjects that are unnecessary. I — like other parents I talked with — simply ask that all children learn the basic minimum. There is no concern that these subjects will harm our worldview or ultra-Orthodox education. What I learned as a child, my children could also learn. I don’t understand why they deny children these basic subjects, when the same educators who are teaching them today learned these subjects as children themselves.”

This demand is gathering momentum. If in the past it was heard only among the “working ultra-Orthodox” (also called “blue shirts”), who established special schools for their children, today it is heard increasingly even in the more conservative Hassidic circles.

The father of six added, “Today young yeshiva students are encouraged to work, and there are centers designed to teach them professions. Why make it hard for these students when they discover at age 25 that they have to close gaps, when they could have learned these subjects in their childhood?”

He explained, "This must not come at the expense of sacred studies, and certainly I’m talking only about the elementary grades, and not about higher yeshiva studies that should be devoted to Torah study. Why shouldn’t children who in any case learn basic secular studies learn these subjects — but more seriously?”

Despite growing support for this demand, he said he found himself attacked by ultra-Orthodox rabbis. They argue that even if his demand is partially justified, it still entails what they consider capitulation to the demands of the government. The rabbis blame the government for trying to impose secular studies on the ultra-Orthodox. That’s why, they say, it should be opposed in every way.

Nonetheless, the subject has reached the headlines in another context. Two months ago, the ultra-Orthodox newspaper HaMishpacha reported that the Belz Hassidic sect, a sect considered conservative, in a behind-the-scenes move led an effort to integrate its educational institutions into the public school system. The sect’s schools would be directly integrated into the Ministry of Education without becoming part of the ultra-Orthodox “independent education” branch.

According to the plan, which has caused an uproar within the ultra-Orthodox community, Belz institutions would agree to include secular subjects in their curricula. In exchange, they would receive full funding. This is a change from the current situation where they are defined as “exempt institutions,” which means that they are exempt from government curricula, but receive only partial funding.

As mentioned, the notice that the Belz sect agreed to enter the public school system has sent shock waves through the ultra-Orthodox street. Senior figures of the sect — including Knesset member Rabbi Yisrael Eichler, who represents it in the Knesset — have been harshly attacked.

Those who oppose the move are the leaders of the ultra-Orthodox Lithuanian camp. They argue that this is a dangerous step, since once the Belz institutions join the public school system this will legitimize the state educational system, and additional institutions would be tempted to do so. Lithuanian leadership, which today controls the ultra-Orthodox street, went even further and stated that Belz Hassidism should be punished.

As things look now, ultra-Orthodox United Torah Judaism party, which is composed of the Hassidic Agudat Yisrael faction (which includes Belz) and the Lithuanian Degel HaTorah faction, may even split up. Degel HaTorah said the reason for the split is that they refuse to sit together with the Belz Hassidim, who are willing to join the state educational system — a move the ultra-Orthodox have opposed since the founding of the State of Israel.

Belz leaders have argued that in reality, this move will not entail including the full program of general studies, but only basic studies. Or as one Beltz source said on condition of anonymity, “What we study today, with a little addition.” They reject the claim that outside supervisors from the Education Ministry will oversee instruction, and say that even if their schools are included in the state educational system, they will remain independent.

“Finally,” concluded the father of six, “after years of arguing that we can allow our children general education, I hear the same voices from the Belz Hassidim, who cannot be suspected of 'modernity.' So yes, this move displeases the Lithuanian public, but if the Hassidim adopt this approach we can help a whole generation of students receive basic professional education, without harming the quality of education.”