By giving preference to Yiddish over English and math, ultra-Orthodox schools prevent their graduates from seeking a future in the high-tech industry. 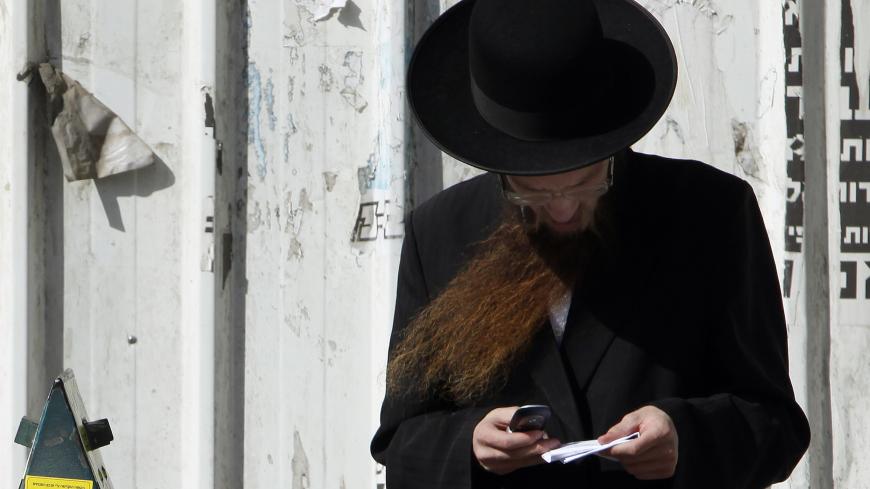 An ultra-Orthodox Jewish man uses his cellphone along a street in Bnei Brak, near Tel Aviv, May 3, 2011. - REUTERS/Nir Elias

Prime Minister Benjamin Netanyahu is particularly fond of cyberspace issues and even has a social-cyber vision. At a 2014 meeting with the heads of IBM on the sidelines of the World Economic Forum in Davos, for example, he said the Israeli cyberindustry could be a catalyst for harnessing the potential of ultra-Orthodox society and integrating it into the high-tech industry and cyberindustry. Yet only a few days before Netanyahu and his wife set off last month for the 2018 summit in Davos, his government took another step toward perpetuating the ignorance and insularity of ultra-Orthodox society. This was when Education Minister Naftali Bennett signed a regulation enabling the state to fund unregulated ultra-Orthodox schools that teach Yiddish as a foreign language rather than English. Some 51,000 children attend those schools.

Yiddish, which was the lingua franca of millions of Jews in Eastern Europe for centuries, is a wonderful language well worth preserving. However, it is not particularly useful in the high-tech sector or in any other industry for that matter. Indeed, the hidden potential of Jewish ultra-Orthodox society cannot be overstated, but nor can the severity of the blow inflicted by policies such as Yiddish instruction on this potential and its damage to Israel’s strategic interests.

Indeed, one cannot underestimate the intellectual potential within the ultra-Orthodox community. But the high levels of natural growth of this community do not mean high realization of this wonderful potential. On the contrary, according to Education Ministry and Adva Center figures, the number of ultra-Orthodox children in the Israeli school system has almost tripled over the past two decades compared with a growth of 11% in the number of children in authorized state-funded schools and 16% in the number of children in religious state-funded schools. At the same time, the average school years of an ultra-Orthodox male have dropped. In fact, the rate of ultra-Orthodox men with only eight years of schooling has increased over the years to over 50% of the men. This means that more than half of the ultra-Orthodox male population received barely eight years of education, or even less when compared with the number of ultra-Orthodox men with 12 years of schooling or higher education. It should thus come as no surprise that the achievements of Israeli schoolchildren in math and science are among the lowest in the developed world. Whereas Netanyahu boasts of Israeli research achievements, the number of senior staff per capita at research universities has plummeted more than 50% over the past four decades. Obviously, hundreds of thousands of graduates of the ultra-Orthodox education system who did not study English or math and who never attended a laboratory classroom do not end up in universities or research institutes.

The Shoresh Institute for social-economic research at Tel Aviv University warned two years ago that if the rates of employment and productivity among Israel’s ultra-Orthodox and Arab communities don’t catch up with those of other Israelis, the government’s deficit (as a percentage of the GDP) is expected to quadruple, whereas the debt-product ratio would soar to the point of national bankruptcy. Even now, more than half the country’s adult population does not pay income tax. Some 89% of the state’s income tax revenues are paid by 20% of the adult population. After all, someone has to pay for Yiddish lessons in ultra-Orthodox schools. Otherwise, how will the students realize their potential in cyberspace?

In 2015, a group comprised of dozens of Israeli men who had walked away from their ultra-Orthodox lifestyle sued the state for damages, arguing that it had funded schools that prevented them from acquiring a basic education, thereby hobbling their employability. They argued that every Israeli child is entitled by law to basic education, no matter what sort of lifestyle and beliefs are espoused by their parents. “The aim of this lawsuit is not only financial,” the petitioners wrote, adding, "It seeks to lead a change in the opportunities provided to those leaving the ultra-Orthodox communities to close their education gap, and to lead the state to accept responsibility for the graduates of the ultra-Orthodox school system." The state rejected the claim, arguing that the petitioners and their parents had their pick of different types of schools appropriate to their system of beliefs and lifestyle. The state attorney’s office said in its response that the petitioners should direct their lawsuit to their parents and schools they attended. The court rejected the petition, citing statute of limitation.

In August 2016, the Israeli Knesset decided to block the path of all ultra-Orthodox students — not just of those in unregulated schools — to the 21st century. Lawmakers voted 41 to 28 for proposed legislation sponsored by the government and by Knesset member Moshe Gafni of the ultra-Orthodox United Yahadut HaTorah Party reversing a 2013 decision that mandated the teaching of core subjects such as math and English at schools receiving government funding. Prof. Manuel Trachtenberg, who has established a lobby for equality in ultra-Orthodox education, accused the government of shirking its responsibility for a community that is crying out for employment in order to extricate itself from cycles of poverty and ignorance. “The main complaint of the ultra-Orthodox is that they don’t know English, the fundamentals of math and computers,” said Trachtenberg, who was appointed by Netanyahu following the 2011 social protest to head a panel on social-economic reform.

The Education Ministry has explained the Yiddish teaching regulation as reflecting its recognition of the distinct lifestyle practiced by students at the unregulated, ultra-Orthodox schools. However, according to the Shoresh study, the rate of American ultra-Orthodox Jews holding academic degrees is double compared with that of Israel’s. The explanation for this gap does not lie with the ultra-Orthodox leadership but rather with the ultra-Orthodox politicians and their government partners who lend a hand to this injustice and stupidity. They have turned the Orwellian formula of “ignorance is strength” into a political doctrine.

Maimonides, the great 12th-century Jewish philosopher, directed his treatise about the vital importance of work and self-sufficiency at such people. “Whoever thinks he will study Torah and not work and will be supported from charity profanes God's name, shames the Torah, darkens the light of knowledge, causes harm to himself and takes his life from this world. For it is forbidden to derive benefit from the Torah in this world,” he wrote (Mishne Torah, Talmud Torah 3:10).

Fortunately for the Jewish people and Maimonides, this prolific sage, doctor and scientist lived and studied in the 12th century. In the ultra-Orthodox school system of 21st-century Israel, he would not have stood a chance of getting a job in the high-tech industry or the cyberindustry. Even being fluent in Yiddish would not have helped.