Instead of forced enlistment, Israeli leadership must dialogue with ultra-Orthodox 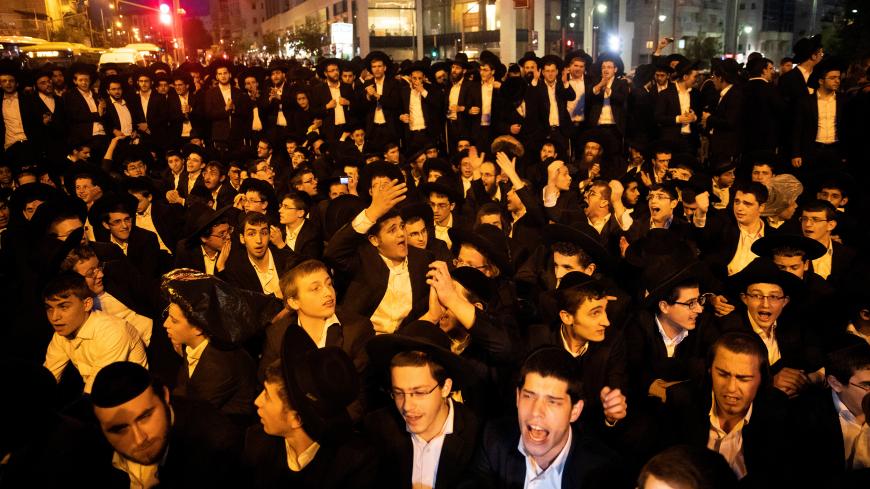 Israeli ultra-Orthodox Jewish men protest against the detention of a member of their community who refuses to serve in the Israeli army, Jerusalem, Nov. 28, 2018. - REUTERS/Ronen Zvulun

Ostensibly, there is no connection between the two surprising government figures issued this past month. One points to a 20% decline in the number of ultra-Orthodox men enlisting in the army in 2018, compared with 2017, although the natural growth rate of the country’s ultra-Orthodox population averages 4% annually. The second piece of data indicates that residents of Israel’s five most populous ultra-Orthodox communities with the country’s highest poverty rates — Bnei Brak, Beit Shemesh, Beitar Ilit, Modi’in Ilit and Jerusalem — enjoy a longer life expectancy than could be expected given their socio-economic standing.

Researchers at the Taub Center for Social Policy Studies attribute the good health and long life expectancy of the ultra-Orthodox communities to the social cohesion of this population group, which constitutes 11% of the population. This cohesion is distinctly obvious in the impressive support for the rabbis’ ban on military enlistment of ultra-Orthodox men and their refusal to expose their young to modern society by teaching them such subjects as math, science and English. In April, Haaretz columnist Rogel Alper described the ultra-Orthodox as “primitive." Responding to the article, ultra-Orthodox pundit Yisrael Cohen wrote, “More than a million Israeli citizens are completely certain that anyone living in Israel and denying the millennia-old tradition of our fathers, anyone who despises and undermines Jewish values, they are the primitive and ignorant.”

Cohen, whose views reflect those of mainstream ultra-Orthodox leadership, continued, “Throughout their years in exile, the Jews were considered smart and educated, not necessarily because of their general studies but because of their dedication to Torah study combined with fervent religious belief and a life filled with significance.” Nonetheless, in an interview with Al-Monitor, Cohen pointed to an ongoing shift in the community, but said there was a gap between reality and the expectations of economists and military authorities. “The change is occurring at a far slower pace, but it is taking place in family and community attitudes toward those who go out to work and even those who enlist [rather than those dedicating their lives to holy studies]," he said.

According to Cohen, the state should invest more in helping young ultra-Orthodox men catch up with the math, science and English studies they missed in their schools, direct them to academic studies and send them as fast as possible into the labor market. He recommends doing so in “certain” cooperation with the religious leadership, or at least softening its objections to this trend. Cohen rejects the argument that the ultra-Orthodox leadership objects to general studies because ignorant voters tend to be more obedient. “Even more liberal communities — such as the Chabad or modern Lithuanian-Hassidic communities — obey their rabbis,” he noted. Cohen argued that the objection to teaching “secular” studies in ultra-Orthodox schools stems from concern about government intervention in the communities’ curriculum and possible contamination by views of nonbelievers.

Israel’s secular leadership is uncomfortable and helpless vis-a-vis this resolute, united ultra-Orthodox front. “The general public, pundits and opinion shapers cannot say that they oppose separation [of men and women in public, as demanded by the ultra-Orthodox] in academia or non-coed army units, and on the other hand demand that the ultra-Orthodox be integrated into the military and the work force,” Cohen said. “It is a contradiction in terms. You can try walking between the drops, but eventually there will be a collision.” He blamed anti-clerical politicians such as Yisrael Beitenu leader Avigdor Liberman and Blue and White senior Yair Lapid for waging campaigns of incitement against the ultra-Orthodox, which, he argued, enhance this community’s sense of isolation and ghetto living.

Lapid and his partners are leading the “incitement campaign,” according to Cohen’s definition, under the slogan “an equitable sharing of the burden.” This euphemism for the demand that ultra-Orthodox men enlist in the military, work and pay taxes like all Israeli men conceals one of the greatest failures of Israel’s secular society. The decline in the number of ultra-Orthodox draftees and their relatively low share of the job market illustrates what happens when a secular society keeps banging its head against the wall and allowing emotional-populist considerations to overweigh courageous, rational policy.

“Anyone who thinks we will fold on the issue of an equal sharing of the burden, does not know us,” Lapid said in 2013 in what became the rallying cry for his Yesh Atid party. Indeed, a year later he hailed the “historic decision” by the government-appointed Shaked Committee approving legislation that included criminal sanctions against draft evaders. The law obliges ultra-Orthodox men to study full-time in a yeshiva if they want an exemption from the draft; if they stop their studies and/or get a job, they face compulsory military service. Lapid claimed that the military draft reform would send tens of thousands of ultra-Orthodox men into the labor market rather than keeping them “jailed” in yeshivas and living at the expense of the state. However, in 2016, with his sights set on the premiership, he appeared to get off his hobby horse, pledging that the “equal sharing of the burden issue will not be on the table if and when I form the next government.”

A report by the government watchdog State Comptroller agency found that between 2013 and 2016, ultra-Orthodox recruitment failed to meet the set targets and the gap between the enlistment of yeshiva students and the targeted figure had increased eightfold, from 1.4% in 2013 to an 11% gap in 2016. Recently issued data show that the 2018 enlistment rate was the lowest since the military started offering specialized programs for ultra-Orthodox men. The number of ultra-Orthodox men aged 22-24 who enlisted in 2017 reached no more than 417, whereas 14,000 men their age found refuge from the draft in yeshivas. This is how the state makes it hard for young ultra-Orthodox men to acquire higher education that would enable them to get quality jobs and thereby alleviate the crippling poverty of their households.

Community service, which is less of a threat to the ultra-Orthodox way of life, could serve as an opening for young yeshiva students to join the work force without serving in the army. However, while conceding that enlisting the ultra-Orthodox is not essential, the military supports politicians who reject the community service alternative to the military draft. It turns out that in order to justify its position, the Israel Defense Forces has for years been falsifying and inflating the figures of ultra-Orthodox recruitment.

The newly released data by the Central Bureau of Statistics (CBS) on Dec. 4 regarding the high life expectancy and improved health of members of the ultra-Orthodox community are welcome news for 11% of the population. According to CBS projections, in 2040, the ultra-Orthodox community will comprise 20% of the country’s population and by 2065, every third Israeli will be ultra-Orthodox (6.4 million of 20 million residents). Unless secular Israeli society stops banging its head against the wall and replaces the “equal burden sharing” slogan with a policy based on integration through cooperation in resolving Israel’s joint economic, social and political challenges, the state will collapse under the burden.