Much like the leaders of the ultra-Orthodox community, Israeli politicians and ministers are afraid to condemn the violent demonstrations against the summoning of ultra-Orthodox students to IDF induction centers. 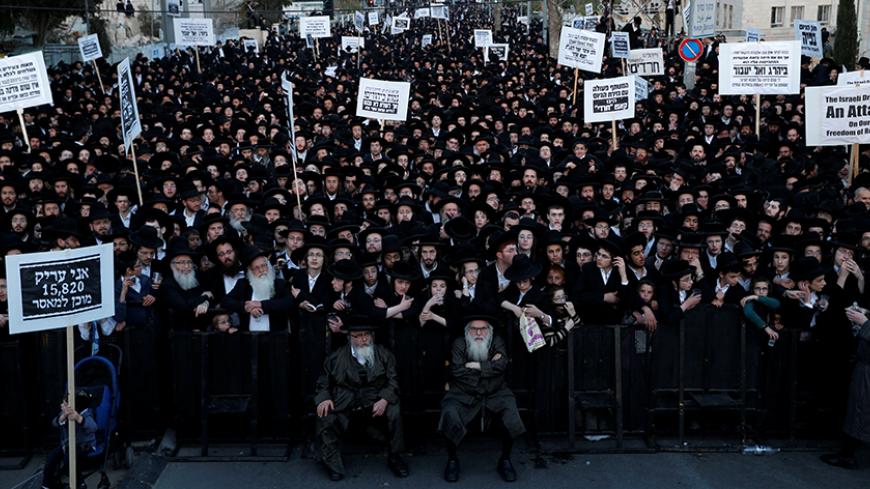 Ultra-Orthodox protesters take part in a demonstration against members of their community serving in the Israeli army, which later boiled over into violence, Jerusalem, March 28, 2017.

Fliers distributed throughout the ultra-Orthodox neighborhood of Beit Shemesh on March 24 called for people to pray for the death of Major Yaakov Rashi, the commander of the Israel Defense Forces' (IDF) ultra-Orthodox induction center. These threats against Rashi are part of a violent ultra-Orthodox struggle against the IDF, which broke out over the past few weeks after several rabbinical college students were arrested. The reason for their arrests was that they had violated an accepted procedure, agreed upon by the ultra-Orthodox seminars, and refused to show up at the IDF induction center upon receiving their first draft notice, so that they could request an exemption from military service. This got them listed as deserters.

The protests included violent demonstrations, the blocking of roads and physical attacks against ultra-Orthodox men serving in the IDF and their families. The struggle has intensified over the past few days, reaching its climax in a violent incident captured by a Channel 2 film crew, in which young ultra-Orthodox men and boys attacked a young secular woman, who got caught in the middle of a Jerusalem demonstration. Anyone who has seen the chilling footage cannot help but think that if the woman had not been extracted so quickly by border patrol officers at the site, the incident could have ended much worse than it did.

In the case of Rashi, incitement against him is unhinged and particularly focused on him personally. The demonstrators describe him as nothing less than the enemy and as someone who deserves to die. Rashi, a religious man, was appointed to the position in 2014 as part of the IDF's preparations to fulfill the "Sharing the Burden" law — by which all young men must enlist in the IDF, including ultra-Orthodox men — enacted under the leadership of the Chairman of Yesh Atid Yair Lapid (in the previous Netanyahu government). That law was intended to boost significantly the number of ultra-Orthodox men serving in the IDF.

But then, in 2015, the fourth Netanyahu government overturned the revolutionary new law as part of coalition agreements with ultra-Orthodox parties. Instead, the old status quo — where students of rabbinical colleges are exempt from enlisting — was restored. Since that time, ultra-Orthodox men were no longer required to enlist. They were simply required to show up at the induction center upon receiving their first draft notice so that they could declare that "studying the Torah was their profession." It is hard to believe, but the trigger for these violent demonstrations, which are only getting worse, was the requirement that young ultra-Orthodox men pay a single visit to the induction center, rather than commit to compulsory military service, like all the other Jewish citizens of Israel.

Most of the ultra-Orthodox public, including its top political leadership, is not a part of these protests. Most even oppose them, realizing that if anyone gets hurt, "sharing the burden" will once again climb to the top of Israel's agenda. In other words, they will be the ones to pay the price for it.

The violent protests are being led by Rabbi Shmuel Auerbach, a leader of a Lithuanian ultra-Orthodox faction known as the "Jerusalem branch." This is a radical, anti-Zionist community, which rejects all the institutions of the state and its very legitimacy. It does not even send representatives to the Knesset. That is why its leaders consider something as trivial as insisting that its young men appear once at the induction center to receive an exemption to be a crime by the State of Israel against Judaism itself. Auerbach and his followers do not accept the authority of the foremost leader of the Lithuanian faction, Rabbi Aharon Leib Shteinman.

For this reason, over the past few days, the most prominent ultra-Orthodox journalists have taken a very hard line against the violent demonstrations led by Auerbach. In an interview with the ultra-Orthodox paper Kikar HaShabbat, Interior Minister Aryeh Deri (Shas Party) called the struggle "a desecration of the Divine Name." As an experienced politician, Deri recognizes the potential damage to the reputation of the ultra-Orthodox community among the larger public, which is being exposed to such violent demonstrations.

It is true that internecine political squabbling within the Lithuanian faction of ultra-Orthodoxy has erupted outward, staining the reputation of the ultra-Orthodox community at large. Nevertheless, the silence of politicians in the wake of the violence and death threats is disappointing. Deri's statement is not enough. Right now there is a vital need to recruit the entire ultra-Orthodox leadership for this state of emergency, so that they do what they can to restore calm.

In a March 27 interview, Chaim Rashi, the father of Yaakov Rashi, said that his son was strong and that he would not break, despite the threats against him. At the same time, he rightfully criticized the ultra-Orthodox leadership, saying, "Where are all the ultra-Orthodox leaders? The heads of the rabbinical colleges? Why aren't they being heard? … These demonstrators are doing a disservice to all of ultra-Orthodox Judaism. … Where are all the members of the Knesset? They're allowing anarchy to run rampant and for what? They have to take the financial oxygen [state budgetary support of the colleges] away from the demonstrators. Then these demonstrations will die. Right now it is anarchy in every sense of the word."

Rashi's father also pointed out another disconcerting phenomenon. While politicians, and not just ultra-Orthodox politicians, are silent, other official state bodies have also been lax in responding to the violence. Apart from just arresting a handful of demonstrators, which only exacerbates the fury on the ground, there is a wide range of measures that can be taken, from arresting the people behind the incitement to stopping state funding to those groups involved in the demonstrations. The same is true of the police. While they initially decided to contain the demonstrations only, they must now change course and recognize that the phenomenon is getting worse by the day.

Though Netanyahu is currently busy dealing with the Public Broadcasting Corporation crisis, he could have instructed State Attorney General Avichai Mandelblit to come up with an emergency plan to deal with this new wave of violence, in conjunction with law enforcement, the legal system, the IDF and the police. Anyone hoping to hear that Justice Minister Ayelet Shaked (HaBayit HaYehudi) had been taking action in response to this incitement to murder will come away disappointed as well. If Lapid, who led the struggle on behalf of "sharing the burden," will not go out of his way now to stop the violent protests against the IDF because of personal political considerations, why should other politicians volunteer to do the job for him and risk getting into a conflict with the ultra-Orthodox parties?

Like Lapid, Isaac Herzog, the leader of the opposition and of the Zionist Camp, realizes that he must maintain good relations with the ultra-Orthodox if he ever plans to put a coalition together. And so, the violence runs rampant, disaster looms right around the corner, and the authorities stand idly by.