Unlike late Prime Minister Yitzhak Rabin, Prime Minister Benjamin Netanyahu will likely once again give in to the terrifying annual intimidation campaign of the defense establishment eager to secure its budget. 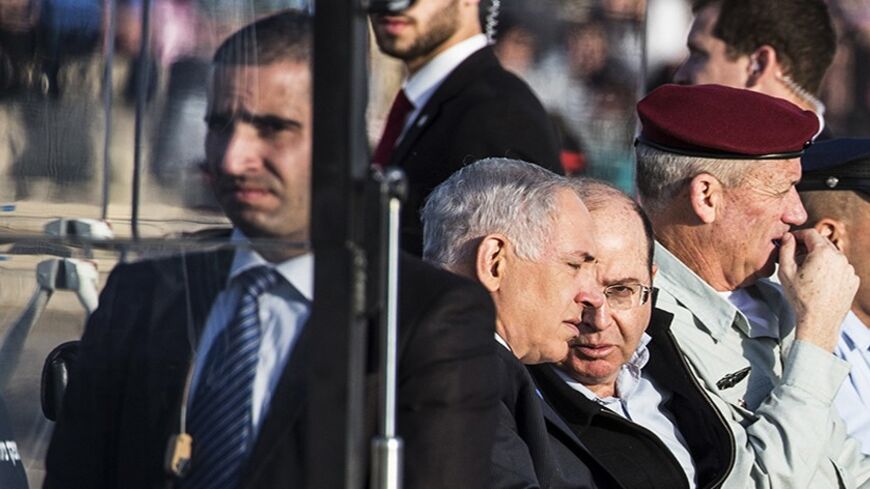 A few months after Yitzhak Rabin was elected prime minister in 1992, one of his aides invited me to join Rabin for lunch in the Knesset cafeteria. Rabin was so introverted that he always depended on his staff to find him company, so as not to be left alone. I was a reporter in the Knesset at the time, and I saw the invitation as an opportunity to engage the new prime minister in an intimate conversation. When I asked him about his decision to serve as defense minister as well as prime minister, his response surprised me: “They can’t fool me, and they can’t intimidate me either,” he answered with a wide grin on his face. By "they," he meant the military’s top brass. “I made a commitment to change the country’s priorities, and the only way that I can implement that change is by cutting the defense budget. Can you imagine the army agreeing to that and sitting by silently while it happens if I wasn’t both prime minister and defense minister?”

I recalled that conversation this week, after the defense minister and the chief of staff spent the past few weeks collaborating in an effort to terrify the Israeli public. Defense Minister Moshe Ya’alon threatened that without billions more in defense funds, he cannot guarantee the calm the country is now experiencing would continue. Chief of Staff Benny Gantz took it a step further. On May 19, he announced that he gave orders to stop training reserve units, claiming that he lacked the funds to enable the training.

It's a scenario that repeats itself year after year. Everybody knows how it begins, and they are even more aware of how it ends. With summer about to begin and the budgetary debates shifting into high gear, the same ritual repeats itself. The heads of the military begin talking about the threats that the country faces, thereby taking over the public agenda. In an effort to avoid harming the enormous budget it receives in any way, the Ministry of Defense habitually presents the Israeli public with a map of threats that encompasses the entire world. Over the past few years, these threats have included scenarios such as a sudden war with Syria, an equally unanticipated attack from Hezbollah and Lebanon and a military escalation of tensions with Egypt. Headlining this map of threats was the Iranian nuclear threat.

Given the noticeable calm on all of Israel’s fronts, this year the heads of the security establishment were forced to be more creative to maintain the seasonal state of anxiety. They were concerned over demands by government ministers, and particularly by the heads of the Finance Ministry, that billions of shekels be cut from the defense budget. The Finance Ministry explained that every shekel cut from the Ministry of Defense could find its way to more urgent needs in welfare, education, health and infrastructure. In an effort to ward off this assault on their budget before it actually took place, the heads of the defense establishment launched a pre-emptive strike and demanded that their existing budget be increased even more. The Finance Ministry’s staff was shocked at what they called, “the army’s chutzpah.” Department of Budgets head Amir Levi responded sharply to these demands in the Calcalist newspaper on May 11: “There can’t be two countries here: the Finance Ministry is subordinated to the government, and the Ministry of Defense is subordinated to the government,” he said. “Why should the Ministry of Defense operate any differently? We are all quite happy about the fact that the security situation hasn’t changed.”

Commentators and pundits are unanimous in their opinion that this year, as in every other year, the prime minister will decide in favor of the Ministry of Defense and transfer additional billions of shekels to its budget. Prime Minister Benjamin Netanyahu’s approach reflects his political and strategic perspective on the Middle East. Like former Prime Minister Ehud Barak, Netanyahu is also convinced that Israel is a “villa in the jungle,” surrounded by deadly enemies who want to destroy it. At no point in time does he foresee real peace with Israel’s neighbors or security calm in the region. The prime minister of Israel lives in a constant state of diplomatic and security angst.

Despite the sanctions against Iran, and the talks Iran conducted with world powers to reduce its nuclear capabilities and place them under supervision — and despite the agreement reached between them — in 2012, Netanyahu instructed to transfer an additional 11 billion shekels ($3 billion) to the defense budget. This additional budget was designed to fund a potential attack on Iran’s nuclear facilities. Former Prime Minister Ehud Olmert was the one to reveal this secret expense, accusing Netanyahu that his obsession with Iran is costing the Israeli tax payer dearly.

And yet, discussions about the Israeli government’s priorities are underway again. Can social injustices such as poverty and economic gaps be rectified when the security establishment is being run like a bottomless pit? Late Prime Minister Rabin will be remembered as the first leader to cut the defense budget by 5% and transfer that money to social clauses, designated to both the Jewish and the Arab sectors. In those years, the army did not dare arranging any intimidation shows or spread anxiety, as it is doing now.

In those same years, few people only would have allowed themselves to attack the army. Today, however, it is subjected to a sharp criticism because of all the layers of “fat” wrapped around it. Public rage stems from the fact that just 60% of the defense budget is spent on training, military needs and preparations for war, while the remaining 40% is spent on salaries, benefits, pensions, rehabilitation and the families of fallen soldiers.

Many Israelis feel that the cost demanded to defend the state is much too high, given Israel’s small size. An expectation has been created, by which the peace with Egypt and Jordan and security coordination between Israel and the Palestinian Authority would reduce the amount of security expenditures. What actually happened was the exact opposite. This year’s defense budget might break all records for the highest one since the establishment of the State of Israel: 60 billion shekels ($17 billion).

In their book "An Army That Has a State," published in 2008, authors Gabriel Sheffer and Oren Barak commented on the excessive burden that is imposed on the Israeli defense system: “It’s not a country with an army but an army with a country,” they asserted in the introduction to their book. Despite the heated debate over the defense budget, and despite increasing criticism among the public, nothing will change. The public will cry out, like it does every year, and the prime minister will continue doing the same old thing and surrender to the whims of the top military brass, just like he does every year, too.