Some Saudi youth have taken to social media to express their grievances with Saudi government policies. 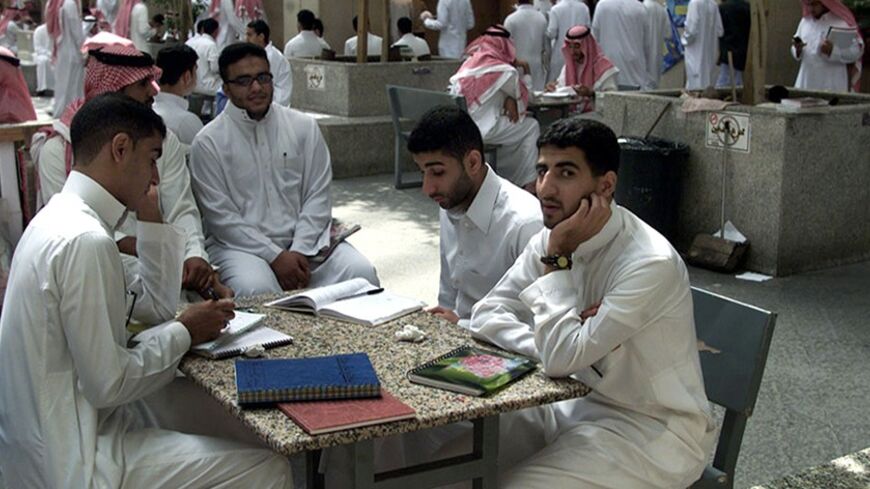 Saudi Arabia today faces something more challenging than a revolution — a sporadic and frustrated youth protest thus far expressed only in the virtual world. More than half a dozen men and women in recent weeks began to post videos on YouTube in a desperate move to attract attention to their economic and political marginalization and to warn against its consequences.

The protesters have identified their tribal origins by showing their identity cards, which revealed that they belong to a variety of groups, among them the Dosaris, Harbis, Jahnis, Malikis and Shammaris. Their language projects a deeply rooted feeling of having not been incorporated as citizens with rights and responsibilities. Rather, they appeared as excluded tribal men and women on the margins of wealth and prosperity. They do not invoke a sense of belonging to the nation-state as Saudis.

These individuals are a product of rural-urban migration in search of the education and employment promised by the gleaming cities of Saudi Arabia, but also the result of disappointment and frustration among a youthful generation with high expectations. They all have one message in common: a sense of entitlement against a backdrop of injustice, impoverishment and marginalization. They cloak their demands in religious language, citing Quranic verses and reminding their audiences of the government’s responsibility to distribute wealth rather than steal it.

Their anger and frustration are directed at the country's Al Saud rulers, whom they accuse of "confiscating" wealth and land, and thereby depriving them of the benefits of living a comfortable life in one of the world's richest oil-producing countries. Their message was initially addressed to King Abdullah in a conciliatory tone of offering advice, but later clips became more threatening, after the first three young men to post clips were immediately arrested. In Saudi Arabia, making grievances public is considered incitement against the country's rulers and a call to dissent and chaos. There was an inevitable snowball effect, with each subsequent video upping the tone and level of confrontation, threatening to move the protest to the streets.

The postings present a set of economic grievances attributed to mismanagement of the economy, plundering of oil wealth, corruption and persistent unemployment. The protesters support their demands with personal anecdotes. Abd al-Aziz al-Dosari cites his low salary of $500, which fails to meet the cost of living. A doctor who had trained in military hospitals claims that he saw three patients sharing one bed. A third protester demands housing, as 70% of Saudis do not own their homes. He claims that 60% of the land belongs to the princes and that more Saudis are living in poverty than at any other time.

The Al Sauds are accused of being totally detached from the reality of people's lives, because they remain preoccupied with succession to the throne and grand projects, such as initiating interfaith dialogue, although they do not communicate with their own people. According to the perceptions and protests of these Saudi youths, they are busy "sending money abroad" to support military coups and intervening in the affairs of other countries, while Saudis are deprived of opportunities to meet their own basic needs.

One message appeared that addresses religious observance, on which Saudi religious scholars and the Al Sauds insist in enforcing piety. The protester questions the logic of a pious society preoccupied with religious rituals but with no real sense of justice or equality. He cites repression and unlawful detention as actions that aggravate people and push them to their limits. He calls on the scholars to speak truth to power rather than remaining silent or prohibiting rebellion against oppressors. Muhammad al-Shammari warns, "The end is drawing near."

Another protester mentions the plight of his brother, who has been in prison for 12 years. He claims to have tried to communicate with officials to obtain his release, but without success. He mocks official Saudi rhetoric on the government's "open door" policy that supposedly ensures access to officials, while in reality, the officials are remote and unwilling to respond to people's demands. He criticizes the government for arresting those who call for returning to the principles of justice and fairness in Islam, implying that both are in short supply in Saudi Arabia.

So far, the regime has had only one reaction to this blunt and unexpected outburst of online protest. It immediately arrested the first men to post videos and denounced their messages. It is expected that more arrests will follow if the trend continues. All the protesters surely expected this outcome but nevertheless felt courageous enough to start a trend, which gathered momentum within days. They have not called for violence or even mass demonstrations.

The protesters initially remained within the permissible, as they simply voiced their grievances and reminded the leadership of its responsibility toward the country's citizens. The language became more confrontational after the initial arrests, with one protester noting that bombings are easy but they have chosen not to go down that path. They also have not called for the fall of the regime, perhaps to avoid arrest, but the online message was enough to provoke the authorities.

These Saudi video protesters are simply ordinary individuals who have taken advantage of social media to send important messages. They do not appear to belong to any organized political movement or known ideological camp or group. They are simply individuals who have had enough of living on the margins of wealth and power. Their religious references are not necessarily evidence of their belonging to radical or moderate Islamist groups. Their religiously saturated messages are simply a reflection of the fact that politics remains religious in Saudi Arabia. The regime seeks legitimacy by invoking its compliance with Islam, while opposition voices attempt to undermine this legitimacy by pointing out that it has not respected Islam. In such a situation, Islam becomes a double-edged sword, with each party striving to undercut its opponent by insisting that its own position is grounded in faith.

Although the video messages do not represent a movement at this stage, they nevertheless have alarmed the regime and various segments of Saudi society. The religious scholars must be dismayed as they witness their authority vanishing among a frustrated young generation of Saudis who believe that they have miserably failed in their mission. These Saudis are mocking the scholars and their role as guardians of Islam and demanding that they support people’s demands out of respect for Islam’s teachings. It is not surprising that the protesters wrap their demands in religion, as it remains the only source for mobilization available in Saudi Arabia and thanks to years spent in religious education reciting Quranic verses that glorify justice against the reality of repression, inequality and unfairness.

The messages are also considered particularly threatening in a society where extreme wealth coexists with extreme poverty. Class cleavages have been drastically increasing in Saudi society, leaving a substantial population with no hope for social or economic mobility. A rising, influential Western-educated and prosperous elite is tied to the government and benefits by occupying key positions in the economy and state bureaucracy. They enjoy unprecedented wealth and privileges while marginalized youths struggle to get by and catch up. The latter are disadvantaged in their lack of connections, substandard educations and dearth of employment opportunities.

Many among the elite will no doubt side with the regime when it suppresses these voices and will believe that they represent radical Islamists determined to undermine Saudi Arabia's security and prosperity. The reality is, however, different. These voices of protest are a plea to correct the situation and make them partners in the country's development and wealth.

The Saudi regime may not be able to ignore these voices for too long. For now they are sporadic, atomized and individualistic, but in the future they may merge into something that is difficult to deal with through mass arrests. The regime has been preoccupied with terrorism for so long that it has ignored a disenfranchised young generation with the potential to drift toward more sinister action if it remains frustrated and angry.