A young Saudi man's March 2012 public suicide was caught on video. Madawi Al Rasheed writes that in line with its policy of denial, the regime’s response has been to blame the victim, invoking psychological disorders and Western influence in an attempt to depoliticize the wave of public suicides and ignore the demands of Saudi Arabia's youth. 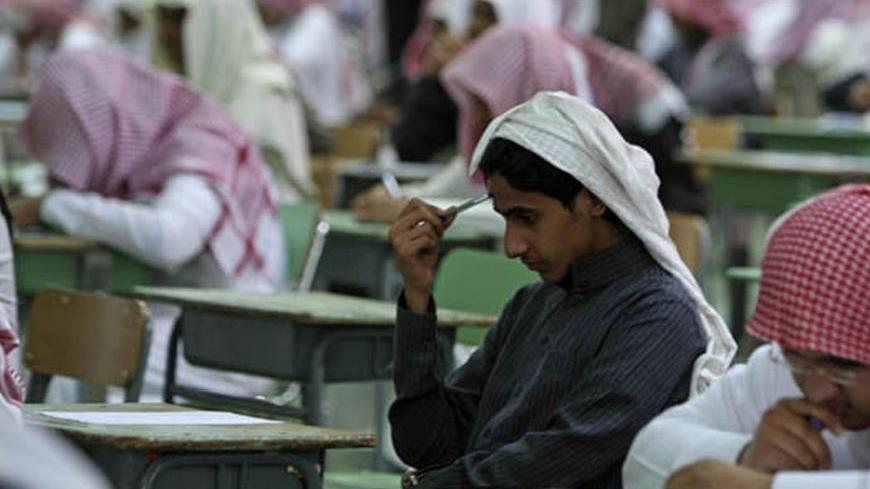 Secondary school students sit for an exam in a government school in Riyadh.

In March 2012, a young Saudi man jumped off a bridge in central Riyadh. Video footage of the scene not only confirmed that his suicide was a public act, but also triggered a wide debate in the media and the recent release of alarming statistics by the Ministry of the Interior. Suicide, particularly among young men and women, is indeed on the rise in this conservative and pious kingdom where the only justified reason for deliberately killing oneself is martyrdom in the name of God, though ulamas (scholars of Islamic law) strongly disagree among themselves about jihadi suicide bombers.

In line with its well-rehearsed policy of denial, the regime’s response to this new phenomenon has been to blame the victim, invoking psychological disorders, the weakening of religious belief under the influence of Western culture, drug addiction and alcohol abuse.

This attempt to utterly depoliticize any type of violence against the self, primarily public-suicide cases, is obviously influenced by the Arab Spring euphoria sparked by the self-immolation of Mohamed Bouazizi, a Tunisian street vendor. In the eyes of an entire generation of young Arabs crippled by the lack of economic opportunities and heavy surveillance by the state, the family or wider neighborhood, suicide has increasingly come to be seen as a weapon of empowerment. It is not caused by anomie related to the erosion of traditional values, but rather excess of regulation and control.

Saudi Arabia is neither a traditional society nor an advanced, industrial one. However, since the 1930s, it has been connected to the global capitalist market through oil production and sales. Thus, it has gradually experienced an unprecedented penetration by a neo-liberal economy with its increased commercialization, advertising and expansion in old and new media from international and local satellite TV to the Internet, culminating in social media. This created an infinite economy of desires that cannot be satisfied even in the richest oil economy of the world because it did not materialize as a natural evolution with the triumph of the ethos and norms (individualism, freedom) preceding these new economies and technologies as seen in the West. The Saudi youth bulge has been unable to satisfy most of its needs, let alone its conspicuous consumption.

In a country with the lowest house-ownership rate in the Gulf region, marriage is delayed for lack of financial resources, prolonged education and changing aspirations, especially among women. Real estate and private land in the main cities, where the majority of the Saudi population lives, remain the prerogative of a small coterie of princes and land developers. This group is uninterested in providing low-cost housing units, preferring more prestigious and lucrative projects. The same economy of desires that is on display at every mall in the kingdom is also denied to the not-so-negligible impoverished and indebted segments of society. It is only recently that young men gained free access to shopping centers at the same time as other shoppers, mainly women and families. Besides, the state promotes and sponsors practices (sex segregation, the ban on women driving, etc.) and religious discourse that continue to criminalize enjoying the pleasures of mass consumption and entertainment. Public-space regulation still amounts to demanding total obedience to authority from God, King, ulama and fathers. To crush the hopes of Saudi youth to join their Arab counterparts and pre-empt any signs of peaceful protest or expression of dissent — whether in real life or in the virtual world — the regime deployed heavy security and policing forces on the ground. It has also enlisted its army of religious scholars who reiterate obedience fatwas day after day from the pulpits of mosques, TV studios and Internet forums. In addition to direct coercion, the regime offered bribes amounting to billions of dollars in the form of unemployement and housing benefits and other social services.

Yet, Saudi Arabia is living a time of unprecedented social and political ferment on which the regime struggles to keep the lid. The media blackout is so far ineffective in exposing repression and mobilization, specially after Saudis have become avid users of new social media and networking communication technology on the Internet. Since 2011, there has not been a week without unemployed youth, employees of both public and private sectors and university students in Riyadh, Abha and Qasim staging strikes and sit-ins raising the slogan, “The people want the downfall [of those in positions of authority]." In a country where political parties are still prohibited, a group of Salafis in Qasim announced the creation of Hizb al-Umma (the Umma Party) in 2011.

A youth population that is often portrayed as idle, spoiled and unwilling to accept menial jobs has produced its own protest narratives. Several petitions titled “The Demands of Saudi Youth” outlined hopes for a better political future and economic opportunities. More importantly, while they did not call for the fall of the regime, there was nevertheless a realization that most of their aspirations cannot be fulfilled within the existing gerontocracy. For example, the youth demanded political representation through the creation of an elected national council. In April 2012, a more daring petition by a wide circle of more than 5000 professionals, human rights activists, academics and small businessmen aimed at withdrawing the oath of allegiance from Crown Prince and Minister of Interior, Nayef Bin Abdulaziz, held responsible for abuse of human rights and summary detention of several thousands of political prisoners. At the same time, a different pattern of protest calling for the end of sectarian discrimination was unfolding in the Shia eastern province, where demonstrators clashed with security forces, resulting in the death of eight activists.

The regime seems completely unwilling to engage with these demands, let alone act on them. It has so far portrayed these fragmented and isolated scenes of protest as pure economic demands that can be addressed over time with oil revenues. While the Shia protest is automatically described as an Iranian-backed conspiracy against the kingdom, protests against the status quo among the Sunni majority is attributed to faults among the commoners who run bureaucracy and state services at the local and national levels. Subsequently, the monarch issues royal decrees, establishing committees to investigate shortcomings and corruption. But frustration and disillusion with the ability of a virtually non-existent civil society to precipitate change will remain high.

The wave of public suicides merges the personal and the political. As long as Saudi citizens are denied the right of political agency, anger and violence against the self or others, the state and its numerous controlling arms will prevail.

Madawi Al Rasheed is a professor of social anthropology at the department of Theology and Religious Studies, King's College, London. Her recent publications include Contesting the Saudi State:Islamic Voices from New Generation (CUP 2007), Demystifying the Caliphate (Hurst 2012) and A Most  Masculine State: Gender, Religion and Politics in Saudi Arabia (CUP 2012). Short articles are posted on her website (in English and Arabic) and Facebook page. Al Rasheed is on Twitter as @Madawidr.