Human trafficking and abuse of domestic workers continue in the kingdom. 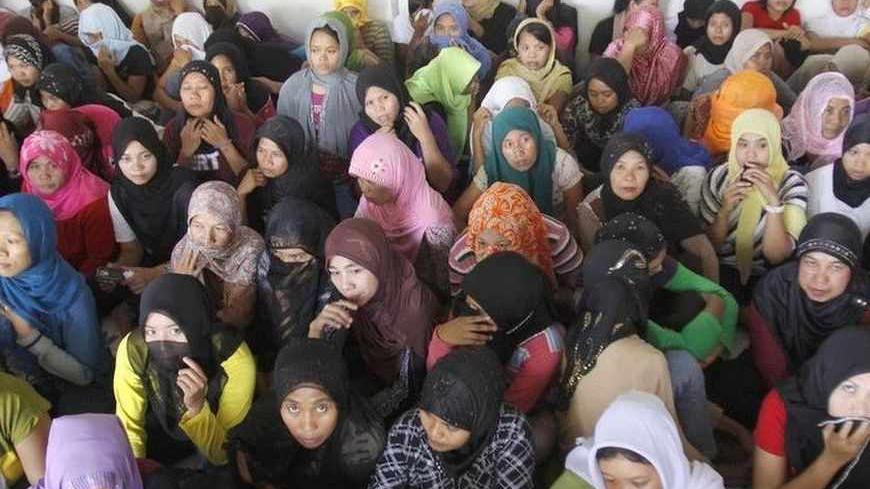 Indonesian workers ready to fly to Saudi Arabia to work as maids wait at a shelter during a police inspection in Bekasi, Indonesia's West Java province, June 22, 2011. - REUTERS/Sulthan Hadiwijaya

The plight of domestic workers in Saudi Arabia came to the forefront once again with the news of a 30-year-old Kenyan woman who escaped her employer’s mansion in Orange County in July 2013 to tell a familiar story.

The wife of a Saudi prince, Mishael al-Ayban, was accused of human trafficking. She was released on bail after $5 million was paid. The Kenyan domestic worker was reportedly held against her will, had her passport confiscated, worked longer hours and was paid less than agreed. In 2006, Humaidan al-Turki was sentenced to 28 years in a Colorado prison for abusing and sexually assaulting his maid. In London, a Saudi prince killed his manservant in a five-star hotel. He got life imprisonment and, after signing a prisoners exchange treaty with Saudi Arabia, Britain returned the prince to Riyadh in 2012.

In Saudi Arabia, where more than 1 million maids from Africa and Asia are employed, maids committing suicide in desperation are regularly reported in the local media. Others are often accused of abusing children and old people in their care, or even bewitching their employers. These incidents are no longer isolated cases. Saudi women intellectuals and novelists have focused in their fiction on the plight of the domestic worker and its predecessor the slave/concubine. Novelist Omaima al-Khamis narrated their life history in superb fiction and continues to highlight their plight on social networking media.

Given the frequency of abuse cases, it seems that this has become a trend that is difficult to halt despite half-hearted efforts to regulate the legal status of such workers, initiated by the Council of Ministers on previous occasions. The last announcement was made on July 17 when a new law to protect domestic workers was passed. Minister of Labor Adel Al-Faqih explained that the law aims to regulate the relationship between employers and domestic workers, protect the rights of both, and fix the conditions under which such workers are expected to perform their duties. The law is hailed in the press as a historical step towards ameliorating domestic work conditions.

It is difficult to see how this law will change the conditions of vulnerable women domestic workers as this special type of employment seems to be the most susceptible to abuse which takes place in the confines of the private sphere. Abused Saudi women face serious obstacles when reporting their cases to the police and in courts.

To assume that foreign domestic workers have better access to justice than local Saudi women may be too optimistic to say the least. Law enforcement agencies and the courts remain clearly patriarchal and biased in their investigation. Society itself is still not clear on the definition of what constitutes violence and abuse in the domestic sphere. The new law requires workers to obey their employers, very much like Saudi citizens are expected to obey their rulers.

Saudis started importing domestic workers after slavery was abolished in 1962 under pressure from American President John Kennedy. It was one of the rare occasions when the American administration at the time interfered in Saudi domestic affairs. As US jet fighters were getting ready to boost Saudi efforts against Egyptian president Nasser in Yemen where republicans and royalists were fighting a fierce battle, it would have been difficult to justify to the American publics how America can side with Saudi Arabia where slave markets were still flourishing in Mecca and Riyadh.

After the abolition of slavery, wealthy Saudis were the first to import maids initially from Arab countries and later from Africa and Asia. With the first oil boom of 1973, foreign maids became common in the homes of the newly emerging middle class, given the low cost of importing one from poor countries. The limited number of working mothers, mostly teachers, could not cope without their maids in a society that still cherishes large families and regular hospitality.

For aspiring housewives, it was a matter of prestige and social standing to manage several maids in the house, ranked according to their nationality with English-speaking Asians becoming more prestigious to have than Africans. Others preferred Muslim maids from Indonesia and Bangladesh to ensure religious and social compatibility. Yet single Muslim maids were not spared some of the traumas of their non-Muslim counterparts. A Muslim maid is still a suspicious person who travels alone and lives with a family of strangers.

The ambiguity of the status of Muslim women migrants mitigated against a smoother relationship with their employers. Their plight is well-documented in India and Indonesia where women activist groups have raised awareness about their working compatriots in a country like Saudi Arabia and demanded their government’s intervention to regulate migration.

On the Saudi side, the government continues to issue licenses to import maids as rewards for princes who either use them to fill their palaces with cheap labor or sell such licenses to ordinary citizens. Other Saudis apply for licenses and get them if they have connections with government agencies in charge of importing domestic workers. In addition to the legally employed maids, Saudi Arabia has an unknown number of undocumented domestic workers who are threatened with deportation.

Neither the Saudi authorities nor the domestic workers’ governments are serious about finding a solution that would end the saga of human bondage in this oil-rich country. International labor organisations and global human rights civil societies publish annual reports exposing this hidden tragedy, long kept away from scrutiny and investigation. Foreign governments are eager to continue to receive the migrants’ remittances that allow destitute families to survive and are unlikely to rock the boat, thus becoming accomplices in the plight of their own women domestic workers abroad.

Saudi Arabia is also unlikely to act swiftly either to limit the number of imported domestic workers or to regulate and protect them. Domestic workers fulfil many functions in the social and political life of the Saudi polity. While images of princesses behind bars in Orange County and elsewhere are mere embarrassment, domestic workers prove to local constituencies that they remain privileged citizenry above manual labor even in the confines of the private home.

Domestic workers are a stark reminder that Saudis are lazy people who prefer to be unemployed than take up a menial job. It is also important for Saudi women to feel that they are not at the bottom of the social hierarchy, deprived of all civil and political rights as there is always another woman who is much worse off than themselves. In popular imagination, Saudi women are "jewels," protected and cared for as they increasingly become managers of the household with its many servants rather than cooks and cleaners.

While many poor Saudi families cannot afford a house let alone a maid, those wealthy privileged constituencies can demonstrate their prestige and privilege by employing more than one maid. Given the low level of women’s participation in the labor force, not exceeding 15-20 %, foreign maids are a luxury rather than a necessity for idle women.

Nationality and citizenship can only be defined against a vast number of foreign workers who do not enjoy the rights that come with belonging to the nation. An army of foreign workers, a substantial number of whom are located inside the house, has truly become the other against which Saudis define themselves.

Distinguished by their dress, a white long shirt for men and a black abaya for women, Saudis defend the only symbolic visible sign of membership in spaces that resemble a busy international airport. Yet their human and political rights are delayed while their sense of nationalism is limited to membership in a consumer society that can easily afford foreign maids. Endowed with enormous oil revenues, the government made sure that citizenship is about entitlement to consumption, the foreign maid is but one important aspect of immersing oneself in conspicuous consumption, and in many cases abuse.

The silent, minuscule and obedient foreign maid is often that poor and powerless other, seen but not heard whose plight can only change when Saudis find their own equilibrium between their rights and the rights of those who are less wealthy and privileged than themselves.

This will only take place when the rule of law is applied to citizens and non-citizens, poor and wealthy alike. Critical to such development is Saudis abandoning vaguely defined communal rights to individual rights for themselves and others. The abuse of foreign maids by royalty and commoners is symptomatic of a deep-rooted political malaise which cannot be solved without serious shaking up of the foundation of Saudi mythologies about themselves and others.

Madawi Al-Rasheed is a professor of social anthropology at King’s College, London. She is the author of A Most Masculine State: Gender, Religion, and Politics in Saudi Arabia (CUP 2012). You can find more of her work at http://www.madawialrasheed.org/ and she tweets at @MadawiDr