Madawi Al-Rasheed weighs in on the viral video of a Saudi woman confronting religious police and says that as long as Saudi women remain unorganized, Saudis and the rest of the world will continue to watch YouTube clips of futile disconnected incidents, grounded in sensationalism and imagined heroism. 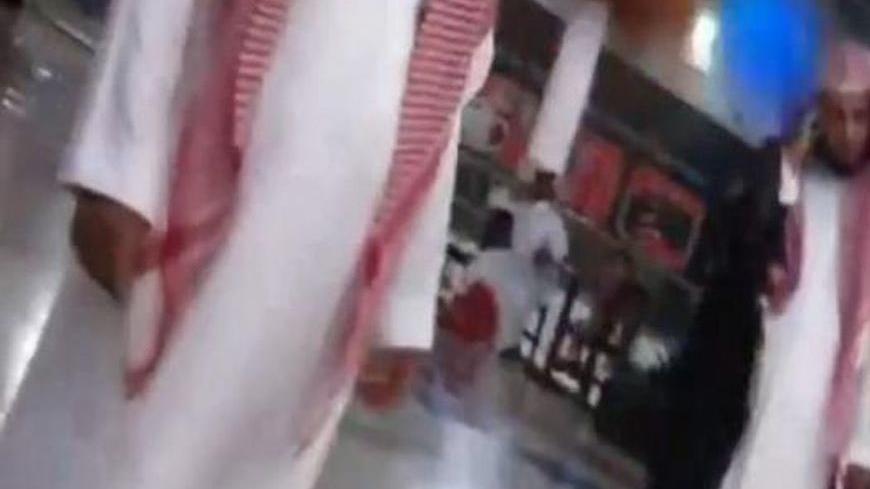 Saudi religious police asking a woman to leave a shopping mall while she is filming. - Internet

YouTube has become a vibrant alternative to traditional visual media like TV and has broken the monopoly the monotonous and boring Saudi official sources had over media in the country. Young Saudis have become freelance journalists producing their own video clips. A couple of years ago, it became common for Saudis to post video clips of young men and women being dragged away and detained by members of the state-appointed religious police, the Committee for the Prevention of Vice and Promotion of Virtue, known as the Haya, which means "committee." Most often, the victim was shown in the video as submissive and silent.

This is no longer the case in present-day Saudi Arabia. On May 23, a Saudi woman posted a video of her heated and animated encounter with a member of the religious police who had asked her to leave a shopping center.

When she demanded an explanation for her expulsion, the Haya agent pointed out that she was wearing excessive makeup and nail polish. Ironically, Saudi women are notorious for excessive spending on cosmetics.

She defiantly refused to leave, promising to teach the agent a lesson.  She told him: "I am free, why are you looking at my face and nails? You have no right to expel me."  She warned him that he was being filmed, and even asked him to smile in front of the camera.

Saudi Arabia is not a country known for its women shouting "I am free" and posting YouTube videos of themselves being assertive and defiant toward Committee members. The woman remained invisible in the clip while her phone camera followed the Haya agent and his comrades as they turned their backs and disappeared into the crowd of shoppers. Little did they know that the video of  their encounter with this woman would draw hundreds of thousands of tweets and generate dozens of articles in the Arab and international press. The woman rocketed to fame as YouTube views topped one million. She is known now as the hero of the clip entitled "Fatat al-Manakir," or "The Nail Polish Girl."

As expected, the Western press hailed the Nail Polish Girl as a brave, defiant and courageous woman. The official Saudi print media was divided. Some criticized her for her "vulgar" confrontation with the Haya agents. Others saw the incident as yet another assault on personal liberty and proof of the committee's excessively intrusive behavior, despite their being instructed by the king to refrain from chasing people and to confine themselves to "verbal instruction" and giving advice.

The Committee for the Prevention of Vice and Promotion of Virtue was established in the late 1920s as a state institution to monitor public morality and ensure that the Saudi citizenry complied with the strict rules of Islamic piety. In the past decades, several directors of the organization were appointed, sacked and replaced by figures who were hailed as reformers.

The Committee is concerned with offences such as flirting with the opposite sex, wearing the wrong style of black veil, or simply sipping coffee with non-mahrams (possible marriage candidates). Its agents roam neon-lit glass shopping centers and other public spaces, suspiciously eyeing the public for any transgression. Only those Saudis belonging to the royal family, or who live with foreigners in walled residential compounds, remain beyond their reach.

Controlling morality in public spaces, enforcing that shops close at prayer time, raiding illegal alcohol factories and brothels and generally tightening its grip on a young population are but a few of the tasks assigned to the committee. Recently, its members raided a book fair and the state-sponsored Janadiriyya Cultural Festival in search of blasphemous literature, dancing and mixing between the sexes. Not a day passes without the official Saudi press publishing news and opinion articles either congratulating the Haya for maintaining the public's virtue or criticising its aggressive intrusions. Its directors are hired and fired without explanation.

This latest episode with the Nail Polish Girl is one of the most sensational chapters in the history of confrontation between the Haya and women. The principle of the Prevention of Vice and Promotion of Virtue is as old as Islam itself. Historically Islamic scholars excelled in debating it, and outlining the limits and prospects of its application. The fact that the Saudi regime and its religious officials adhere to the most restrictive interpretations indicates that dramatic and sensational confrontations such as that of Fatat al-Manakir will most likely becomme more common, as a new generation of young Saudis push for greater personal freedom.

Like other women in the Arab and Muslim world, Saudi women remain weak in Saudi Arabia. They bargain with a patriarchal system that continues to marginalise them. Some call upon the state to protect them, very much like the Nail Polish Girl, who reminded the Haya agents of the king’s orders not to harass people in the streets. Similarly, cosmopolitan, educated and connected women appeal to the state to implement international treaties on gender equality. A third group of women find refuge in the Islamic tradition as a framework for defining their rights and responsibilities.

As long as Saudi women remain unorganised and pushed by an authoritarian state to isolate their struggle for gender equality from other national struggles calling for democratisation, political participation and civil and political rights, we will see individual cases of defiance that are sporadic, uncoordinated and counter-productive. A time will come when women realize that their demand for more rights are part and parcel of a general need for a shake-up of the Saudi regime. The shake-up needs to be grounded in demands for both personal freedoms and political and civil rights for men and women. Until then, Saudis and the rest of the world will continue to watch YouTube clips of futile disconnected incidents, grounded in sensationalism and imagined heroism.

Madawi Al-Rasheed is a professor of social anthropology at King’s College, London. She is the author of A Most  Masculine State: Gender, Religion, and Politics in Saudi Arabia (CUP 2012). You can find more of her work at http://www.madawialrasheed.org/ and she tweets at @MadawiDr