The ditch dug by the Kurdistan Regional Government at Rojava, separating Syrian and Iraqi Kurds, adds another layer of complexity to the regional conflict. 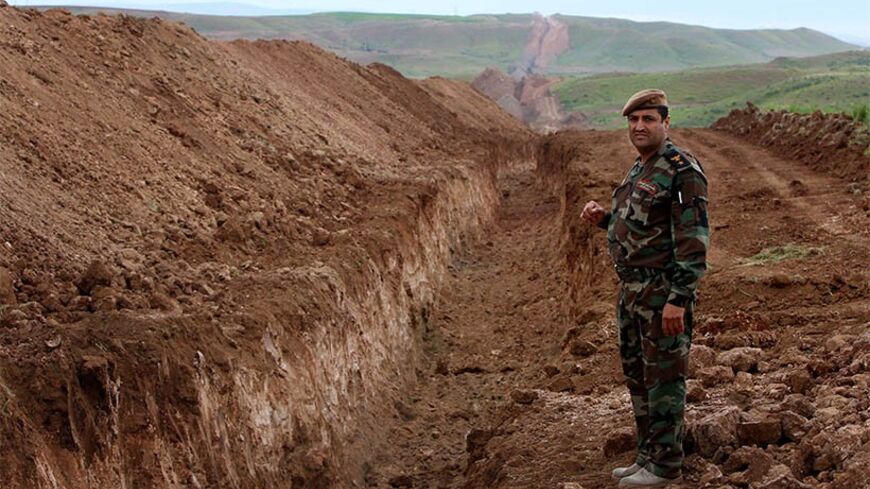 A member of Iraqi security forces looks on during the digging operations in Zakho to build a trench on the northern Iraqi border with Syria to prevent people from crossing over into Iraq's autonomous Kurdistan region, April 13, 2014. - SAFIN HAMED/AFP/Getty Images

Of all those who have cursed Sykes-Picot, it was no doubt the Kurds who lamented the most, as the agreement divided a Kurdistan already split between Iran and the Ottomans and turned normal relations between villages into "smuggling." Poet Ahmet Arif put it best when he moaned, “We don’t know what passports are / for which we will be killed / from now on they will be call us bandits, brigands, smugglers and robbers.”

While talks explored the best way to unite four pieces of Kurdistan known as Bakur (north), Bashur (south), Rojhilat (east) and Rojava (west) scattered in Turkey, Iraq, Iran and Syria and the idea a "Kurdish spring" followed Rojava's declaration of autonomy, Kurdish hopes were again split, this time by a giant ditch.

The decision by the Kurdistan Regional Government (KRG) under President Massoud Barzani to dig a ditch between Rojava and Bashur in Iraq’s north led to a major debate among all Kurds, including those in Turkey. The Kurdistan Communities Union (KCK), an affiliate of the Kurdistan Workers Party (PKK), denounced the trench in a series of statements.

The 3-meter-wide, 2-meter-deep ditch will stretch for 17 kilometers (10.5 miles) from the junction of the Euphrates River with South Kurdistan to Walid Point and be guarded by Iraqi peshmerga forces north of Tilkocher. The temporary bridge at Semelka (Peshbaur), the KRG administration center occasionally opened for use since May 2012, was dismantled. Occasional fire by peshmerga on the Rojava Kurds vehemently protesting the digging of the ditch led to some casualties. Ten tents erected to stage protests by Rojava Kurds from Dirbespiye, Amude, Kamihsli, Tribesbiye and Girke Lege became permanent fixtures.

Another interesting incident that caused heated arguments in South Kurdistan was the lowering of the KRG flag at Peshabur and the raising of the flag of Barzani's Kurdistan Democratic Party (KDP). This action was protested by Talabani’s Patriotic Union of Kurdistan (PUK) and the Goran Movement, a potential partner of the next Kurdistan government, in front of the parliament in Erbil.

The trench dug by the Barzani administration between Rojava and Bashur is the manifestation of their differences of opinion. They are a reflection of the disagreements among the Kurds. Rojava Kurds say Barzani is imposing an embargo on his Kurdish brothers to bolster his relations with Turkey. Kurdish sources say Turkey is also digging a ditch along Rojava’s Derik-Afrin stretch of border.

It is true that regional alliances have a divisive effect among the Kurds. The ditch affair is also a reflection of the conflict between the traditional tribal politics of the KDP with the ideological foundations of the PKK and the Democratic Union Party (PYD). Modern politics based on ideology pose a threat to conventional tribal politics.

Arguments by both sides

Both sides' claims about the purpose of the ditch and whose idea it was are contradictory.

Adil Murad, an official of the PUK, the junior partner of the Kurdish government, accused Barzani: "This decision by the KDP leadership is serving the Turkish policy that is trying to stifle the Kurdish freedom movement in Syria.”

It is hard to believe that the KDP coordinates with the Baghdad government with which it is in perennial conflict. Kurdish sources told Al-Monitor they find the claim of 1,000 ISIS militants caught at the borders unlikely. ISIS generally uses the routes from Mosul to get to Ramadi. Obviously, the groups that will be most affected by the ditch are not armed militants, but smugglers. Smuggling, at the moment, is the illegal lifeline feeding the Rojava economy, which is under blockade by both Turkey and South Kurdistan. This is where the real origin of the trench lies. Preventing smuggling will indirectly contribute to economic hardships and thus may affect the success of the PYD's rule in Rojava. If the PYD weakens and loses control, then the path may open for pro-Barzani parties to gain power.

But the Syrian extensions of the KDP are not effective in Rojava, and remain only nominal. If the KDP had been in control of Rojava, there would not have been a Kurdish embargo on Kurds. From the outset, the core problem has been the rejection of the PYD’s dominant political and security role by the Erbil-Ankara axis. The leaders of Rojava’s pro-Barzani parties — who don’t even live in Rojava — have been constantly saying, “The PYD is not respecting the 2012 Erbil Accord. It is cooperating with the Syrian regime.” In a statement to Sky News, Barzani went even further and said, "The PYD got the Kurds involved in a war at the behest of the regime. It occupied the region with force of arms. Their gains are temporary. When the reasons for their existence wither away, those gains will disappear as well.”

In sum, this struggle began when Barzani’s political project in Rojava failed, and it's getting worse. Now there is another project to empower pro-Barzani parties of Rojava: On April 3, Barzani unified Al Parti, Azadi and Yekiti under the banner of the Syrian Kurdistan Democratic Party. Suud Mele of Rojava is the leader of the new party, thus avoiding the criticism of its leaders not living in Rojava. This time, however, the criticism is that the Rojava delegates have no influence in the new structure. This could mean that this new move by Barzani might not be as effective as he hopes.

It didn’t take long for members of the new party to encounter another reality. On their return to Rojava, some were detained and others were sent back. The PYD thus played into the hands of those accusing it of forcefully taking over the area and not allowing other groups to exist. But some sources think this could have been an impulsive action by PYD militants and the delegates will eventually be allowed to go back to Rojava.

Whether this ditch will be a grave or a combat zone will depend on Rojava’s ability to safeguard its autonomy.