As regional developments open new military and political arenas to the PKK, it is unlikely that the Turkish peace process will end with the Kurds disarming. 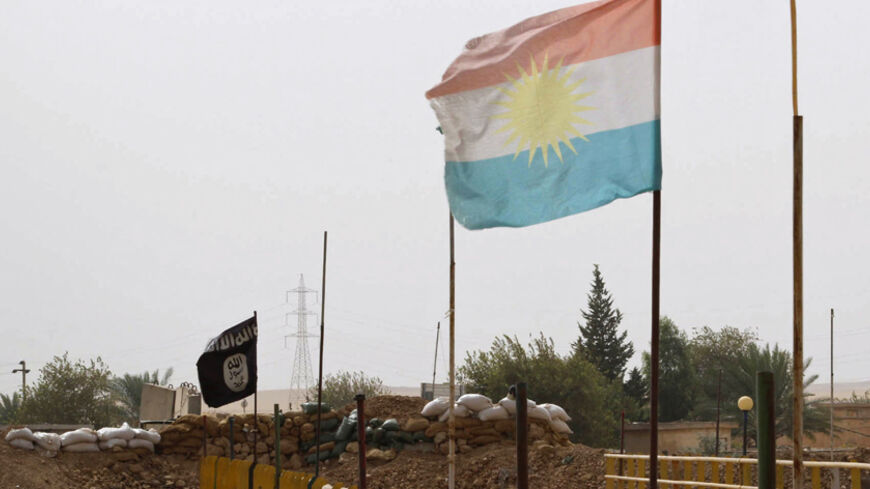 A Kurdish flag and a Islamic State flag flutter on each end of the Mullah Abdullah bridge in southern Kirkuk, Sept. 29, 2014. - REUTERS/Ako Rasheed

In our conversation at the Erbil headquarters of the Kurdistan Regional Government, Sadi Ahmed Pire, the foreign relations official of the Kurdistan Patriotic Union (PUK), had some unusual comments about Turkey’s standing. Pire told Al-Monitor: “The United States comes from across the ocean, Britain and Germany come from Europe, but our next-door neighbor Turkey can’t come? Turkey is a good guest at the table. But when its friend is attacked it watches from a distance. It constantly talks of security of its borders. What about security of our borders?”

When asked if he was alluding to Turkey not preventing the passage of the Islamic State (IS), Pire said: “Yes, Turkey did not prevent it.” He added: “Turkey’s role is shameful. If it is not helping now, when will it? It is our trade partner. For it to do nothing against ISIS is not compatible with friendship and partnership. The Iraqi people’s opinion of Turkey changed 80%. People now think Turkey is deceiving them and has abandoned the people.”

Fine. If Turkey is losing ground in north Iraq, and peshmerga, the military force of south Kurdistan, failed badly by not defending the Yazidis at Shengal, who is winning? The answer came from a Kurdish businessman from Turkey who gave an account of events on the night when the IS turned toward Erbil after capturing Shengal: “When the reports came that IS was approaching Erbil, the city began emptying. People massed at markets and gas stations. Then PKK [Kurdistan Workers Party] guerillas came, paraded in the streets to boost the morale of the people. People started to cheer the PKK.”

Before Shengal, after Shengal

It would not be an exaggeration to insert a “before Shengal, after Shengal” chapter to the Kurdish movement's history. The PKK’s adventure that began at Shengal, expanded arm-in-arm with the peshmerga first at Mahmur and Kirkuk, and then to a large swath of land where Turkmen live at Tuz Hurmatu, Beshir and Taze Hurmatu. Nobody was surprised by seeing the PKK’s military wing, the People's Defense Forces, or HPG, at the Mahmur camp where the Kurds who had to abandon their villages in Turkey in 1993-94 have taken refuge. What was extraordinary was the guerillas’ role in defending the Turkmen who have deep affection for Turkey. When I visited the Turkmen unit deployed to recover Beshir from IS, their commander uncomfortably admitted the nearby critical junction was controlled by the PKK and peshmerga. It wasn’t easy for him to acknowledge the reality.

Now everyone wonders: Can the PKK that keeps a low profile in south Kurdistan politics, despite its heavy armed presence at Kandil and Zap in north Iraq, transform the prestige it accumulated in its battles against IS to a lasting asset?

When I asked Cemil Bayik, the co-chairman of the Union of Kurdish Communities (KCK), whether the new situation was opening new political and military horizons for the Kurdish movement, he did not hesitate to offer some striking views on the PKK’s new position in the Middle East. In our meeting at his Kandil Mountain stronghold, Bayik said: “Our aim is not to solve only the Kurdish issue. We want to resolve democracy and freedom problems of Middle Eastern peoples.”

The PKK normally operates in four sectors of Kurdistan they call Bakur (north), Rojhilat (east), Bashur (south) and Rojava (west). It has variations in its policies regarding each of those sectors. From Bayik’s words, it was understood that even if the peace process succeeds in Turkey, the PKK armed cadres are not easily going to give up their new areas of influence.

Essentially, the joint action against IS in south Kurdistan has given the PKK the opportunity to have its say in regional politics.

Bayik explained their military deployment at Bashur (south): “We came because the interests of south Kurdistan were in danger. We didn’t come to impose our control. As long as the IS danger persists, we will continue to resist with anyone who wants to resist.” He did refer to the political consequences of the situation: “The situation in the south has changed after the Shengal attack. The politics in the south has to renew itself.”

Although KRG President Massoud Barzani visited the HPG command at Mahmur to express his appreciation, many in the region expect the Kurdistan Democratic Party (KDP) leadership that sees the PKK as a political rival will be on guard, and that there will be serious friction once the IS threat is over.

The PUK with a more leftist cultural base has a more positive outlook. When asked how the prestige PKK has gained will affect political balances in the region, Sadi Pire replied: “The people of Bashur are politically awake. They look at the PKK as a political movement.”

Although one can speculate what is next in south Kurdistan politics, the most visible and sensitive aspect of the PKK adventure in the Middle East is Rojava that has been experimenting with autonomy for the past two years.

The message imprisoned PKK leader Abdullah Ocalan gave to a HDP delegation that visited him at Imrali prison was the same: “If Kobani falls, the process will end.”

As Kobani came under more pressure, similar messages continued to come from the political wing of the Kurdish movement. “War will start messages” must have made some impact in Ankara. Soothing messages were sent to the Kurdish side before the parliamentary vote to authorize sending troops abroad. It was reported that Prime Minister Ahmet Davutoglu told HDP Chairman Selahattin Demirtas on Sept. 1: “We too don’t want Kobani to be occupied by IS.”

Demirtas opted to calm the tense atmosphere by saying: ”We assess the prime minister’s words as Turkey’s change of attitude toward Kobani.” It now all depends how the parliamentary authority that the Kurds see as a move against the PKK and Rojava’s YPG forces and not against IS will be implemented on the ground.

As Salih Muslim, the PYD's co-chairman, said, if the parliamentary authority is used in good will and there is no actual buffer zone against the Kurds, there may not be problems.