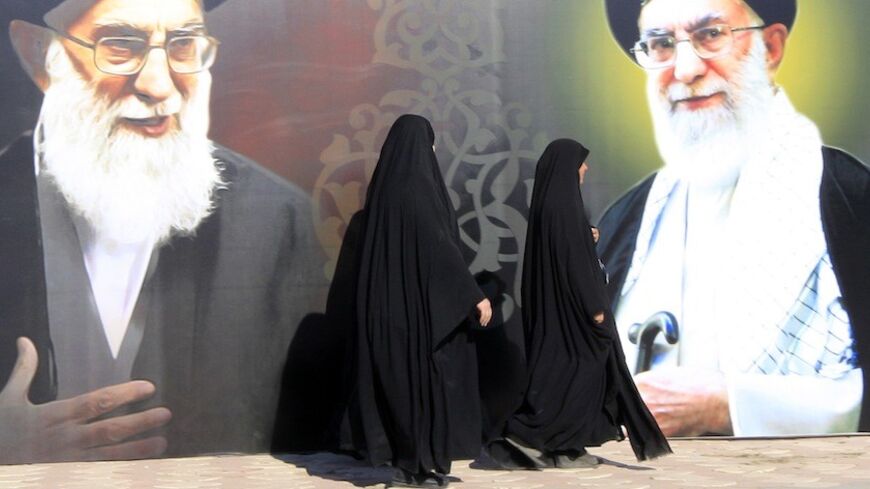 On the occasion of Women’s Day in Iran, Iran’s president and supreme leader presented contrasting roles in society for women. Supreme Leader Ayatollah Ali Khamenei has previously rebuked President Hassan Rouhani’s cultural policies, but this appears to be the first time that the president has contradicted the supreme leader in an area that the two have consistently clashed.

“If we want our view with respect to the issue of women to be healthy, logical and precise,” Ayatollah Khamenei said yesterday, April 19, “we have to empty our minds of this talk that Westerners say about women, [such as] about employment, about management, about gender equality.

“One of the biggest intellectual mistakes of the West about the issue of women is ‘gender equality’,” he continued. “Why should a job that is masculine be given to a woman? What pride is there in this for [a] woman to do a job that is masculine? I’m disappointed that sometimes women themselves show sensitivity on this issue, that ‘What difference is there between us and men?’”

Khamenei continued that with respect to Islam, in some respects “there is no difference,” but that “the shapes are two shapes. One shape is for one job and one shape for another job.”

Khamenei stressed the importance of women’s role in managing the home and the detriment that can be caused by women working outside of the home. “If someone wants to discuss the issue of women separate from the issue of the home, they are entangled in a contradiction of understanding. These two have to be seen together, despite it being two issues.”

Today, April 20, Rouhani talked about a different vision for women’s roles in society.

“Today our women are active in all of the scenes with the same dignity, integrity, character and honor as men,” he said. “Women should have equal opportunity, equal privilege, and equal social rights,” he continued. “Is it even possible to marginalize 50% of the members of society?”

Without addressing anyone in particular, Rouhani said, “This talk is true that the home is the foundation for society, and reform begins in the home, but if we ignore half of the population of the country, we will not see real development and growth in that country.”

On the issue of women’s rights and employment, Rouhani continued “We have a long road ahead to reach our goal. Valuable steps have been taken for women to have a presence in the fields of science, schooling, work, employment. Today our women have a presence in all parts of our culture and economy.”

He added that the Quran sees men and women side by side and that “Those who are scared of women’s presence and excellence, or have other views, to please not attribute these wrong views toward religion, Islam, and the Quran.”