Iran's Islamic Revolutionary Guard Corps is resisting the president's efforts to limit its influence in political and economic affairs. 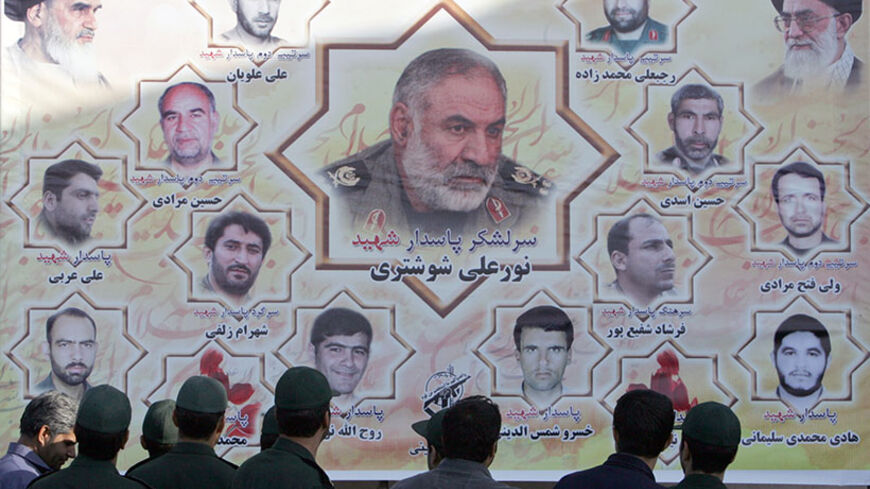 At an April 18 ceremony marking Armed Forces Day in Tehran, President Hassan Rouhani urged the military to respect the will of Imam Ruhollah Khomeini, the late leader of the Islamic Revolution, by “avoiding interfering in political affairs.” The president praised the army, which he said has sacrificed much since the 1979 revolution to protect the country from external threats “without requesting its share from the nation and the elected government.” Rouhani’s comments were a clear reference to the Islamic Revolutionary Guard Corps (IRGC), which has challenged Rouhani’s foreign policy from the start of his administration, especially after the influential organization found the president reluctant to grant it massive economic projects.

In the weeks leading up to the June 2013 presidential elections, conservative circles were concerned about losing their influence on the incoming administration. Almost all polls conducted by different organizations, including the IRGC and national television, suggested that the moderate candidate was in the lead against his seven rivals — all representing the conservative camp — according to a source familiar with the polls, whose results were never published.

The conservatives were right to be concerned. Soon after Rouhani won the election, he called on the IRGC to limit its economic activities to only a few national projects. That was unsatisfactory to IRGC commanders, who had been awarded at least 11,000 development projects, ranging from construction and aerospace to oil and gas, by the previous government between 2006 and 2013. The commanders said their involvement in the economy was only meant to rein in foreign investors’ ambitions and that they would not continue it if the new government did not need them.

Ali Saeedi, Supreme Leader Ayatollah Ali Khamenei's representative at the IRGC, said in January that the military organization “will continue to reduce the number of its projects, as it has already started to do.” He also stated, “Whenever the government needs help, the IRGC is available,” suggesting their eagerness to remain on this lucrative scene.

Maj. Gen. Mohammad Ali Jafari, the IRGC commander, complained in late March that the Rouhani administration had ignored his organization’s call for help. He said the IRGC and its affiliated volunteer force, the Basij, were ready to assist the government with the “resistance economy” — the economic plan outlined by Khamenei to restore the country’s ailing economy and reduce reliance on oil revenues — but, he added, the government “should ask our help.”

The IRGC has been under pressure for years over its alleged vast involvement in the economy, with moderate, pro-reform and even traditionally conservative politicians calling on it to stick to its original mission, loosely defined as “protecting the revolution.” In an interview last summer, Ahmad Tavakoli, a conservative lawmaker from Tehran, accused the military organization of outcompeting the private sector on “unequal terms.” He demanded forceful action by the government to address the problem, which he said had gotten worse during the tenure of the previous president, Mahmoud Ahmadinejad.

IRGC officials rejected such allegations. Brig. Gen. Ramezan Sharif, IRGC spokesman, said in a September interview with Etemaad that his organization had “only 10%” of the whole economy in hand and wondered why no one complained about the IRGC’s major rival, the pro-reform figures affiliated with the Melli-Mazhabi (Nationalist-Religious) group, which is even more heavily involved in the economy.

With Rouhani now insisting on diverting the powerful contractor away from the economy, the organization appears to have embarked on an alternative campaign for leverage, pressuring the administration on the ongoing nuclear talks with the five permanent members of the UN Security Council plus Germany (P5+1) and the cultural activities conservatives have expressed concerns about in recent months.

On the nuclear issue, military commanders have repeatedly warned the Iranian negotiators against negotiating over “national interests,” echoing Khamenei’s earlier call that the United States, the main negotiator from the P5+1, is untrustworthy. In addition, after the Iranian new year, which began March 21, Rouhani critics found new room to maneuver after the supreme leader declared it the year of the “economy and culture,” giving a green light for the “revolutionary community” to criticize Rouhani’s people, who “might be negligent in respect to cultural developments in the society.”

Hamidreza Moghadamfar, socio-cultural deputy commander of the IRGC, criticized the administration's cultural strategy earlier this month and expressed concerns about “excessive tolerance” on issues that must be “seriously” addressed. In a March interview with Mehr News, he said cultural officials’ “negligence” has emboldened “enemies” to “infiltrate our culture” through “cinema, media, books and literature.”

Jafari went even further. In a recent comment on the issue, he said that “society and the executive officials” are unable to “feel cultural threats,” so it is the “duty” of the IRGC and Basij to recognize them and “transfer their feelings” to other parts of the society. The commander has also called on administration officials to reform the “organizational culture” of state-run bodies in accordance with “Islamic criteria.”

Ultraconservatives fear that rival groups could further control the political aspects of Iranian lives by influencing their cultural and social behavior through media and other “soft” warfare. They have been struggling to prevent this through a series of measures, including promoting strict adherence to hijab as a primary Islamic criterion for women and restricting the Internet and social media in an attempt to keep social groups from non-Islamic interactions (such as in August 2011, when young Iranians gathered in a public park in Tehran and held a party-like gathering and shot one another with water guns). The same concern is evident in strong efforts to supervise literature. Authors are believed to be potential manipulators of public opinion who could eventually, and most likely would, change Iranian social and political behavior in a way favorable to the West.

On the economic front, with reports that a comprehensive deal is likely between Iran and the P5+1 by summer, observers believe that the IRGC’s recent pressure on Rouhani is in line with broader efforts by conservatives to play a central role in the handling of major economic projects, which experts expect will boom if sanctions are lifted. The International Monetary Fund (IMF) predicted in February that Iran’s economy, which is now stabilizing, will post substantially stronger growth if Tehran reaches a comprehensive deal on its nuclear energy program.

The International Monetary Fund released a report earlier this month stating that the Iranian government had succeeded in adopting financial policies to “lower the 12-month inflation rate to about 23% in early 2014, sharply down from 45% last June.” It also concluded, however, that Iran must make structural reforms to its economy if it wants to achieve “sustainable growth,” urging the authorities in Tehran to focus on production.

To boost production and develop infrastructure, Rouhani needs reliable contractors and as much as $1,000 billion in investment to achieve the 8% growth target of the Fifth National Development Plan (2010-15). Contracting, IRGC officials insist, is their expertise. Even pro-reform figures know that the IRGC’s role was central to the national economy as the country wrestled with crippling sanctions. Saeed Shirakvand, former deputy minister of economy in the Reformist cabinet of President Mohammad Khatami, said in a September interview with Bahar that it would be impossible to “abruptly” end the IRGC’s role in the economy, as the organization is an “artery” of the national economy.

Rouhani, however, is insisting that military forces only play a logistical role in the economy. On April 19, he addressed law enforcement commanders at a ceremony in Tehran, calling on them to step forward and assist him in realizing Khamenei’s guidelines for the resistance economy. At the time, he requested that they help combat massive smuggling, a major obstacle to structural reform.

It appears that the president has not been convinced that the IRGC is essential to pushing forward thousands of economic projects. With the organization increasing its pressure on the administration’s foreign and cultural policies, however, Rouhani could change his mind, unless he has developed a plan to recruit influential nonmilitary supporters from rival groups.

by Ismail BELLAOUALI with Philippe AGRET in Rabat and Marie GIFFARD in Madrid | AFP | Jun 24, 2022
END_OF_DOCUMENT_TOKEN_TO_BE_REPLACED