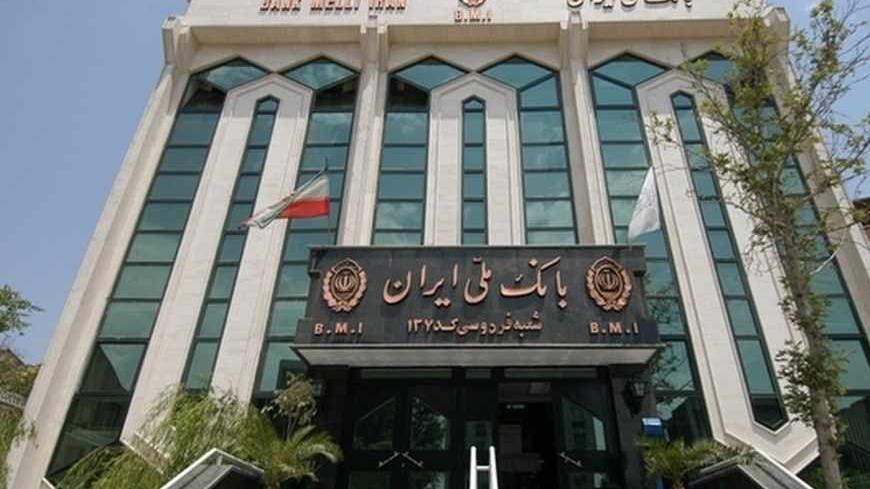 Bank Melli of Iran is one of the country's national banks. - bmi.ae
Kourosh Avaei
September 19, 2013

In preparation for the celebration of “Sacred Defense Day” on Sept. 22 (the date Iraq invaded Iranian territory in 1980), Iranian leaders have been meeting the commanders of the Islamic Revolutionary Guards Corps (IRGC). On Sept. 16, President Rouhani gave a carefully worded speech that was designed not to antagonize the elite force, while pointing to a potential strategic shift.

Rouhani praised the IRGC’s economic activities, but at the same time, he urged the IRGC only to engage in large projects so that it does not compete with the private sector. Rouhani underlined this point: "Today, in conditions in which our economy is a target [of sanctions], the IRGC must enter into action and take on three or four large national projects … The IRGC is not a rival to the people and the private sector … The IRGC today must take on important projects that the private sector is unable to take on."

It was clear from the onset of the Rouhani government that the new administration will try to push the IRGC back into a more strategic position rather than allowing the continued penetration of economic sectors by the military entity. For example, Rouhani’s choice for minister of information and communication technology, Mahmoud Vaezi, was a rebuff to the IRGC, which had controlled this sector for eight years. Furthermore, the return of Bijan Namdar Zanganeh and Mohammadreza Nematzadeh to the ministries of Petroleum and Industry, Mining and Trade were all signs that these sectors would be pushed back to the pre-President Mahmoud Ahmadinejad era.

Even the Reformist media started highlighting the tensions emerging from the IRGC’s expanded role in the Iranian economy. The daily Shargh published on July 22 a challenging interview with the IRGC's spokesperson, Commander Ramezan Sharif, in which he was asked to explain the logic of the IRGC’s presence in economic activities. Sharif outlined that the main motivation for IRGC’s role was “national security” and that the IRGC saw itself as a “protector of Iranian interests,” including economic ones.

Now, the central question will be whether the IRGC will oblige, especially considering the fact that the IRGC command does not report to the president but rather to Supreme Leader Ayatollah Khamenei. Interestingly, Khamenei himself gave a speech to the IRGC commanders on Sept. 17 stating, “The IRGC has to guard the revolution. I don’t want to say that this guardianship has to stretch to all spheres — scientific, intellectual, cultural and economic spheres — I don’t mean this. I mean that the IRGC has to be alive and has to know what it is guarding. What is the revolution? There is no need for the IRGC to guard the political sphere; it only needs to be aware of its developments.”

The above statement could be interpreted as a plea from the supreme leader for the IRGC to reposition itself in Iranian society and its economy. The intended repositioning could be along the lines indicated by Rouhani, i.e. the IRGC helping the government in national projects, but withdrawing from those activities in which the corps is competing against Iran’s private sector (such as telecommunications, construction, small industry, car manufacturing and trading). In any case, Khamenei’s statement offers a clearer interpretation of the objective that has been manifested in the IRGC statutes by the entity is asked to “protect the Islamic Revolution and its achievements.”

However, it is not clear how such a transformation in the economic sphere will actually take place. Does Rouhani intend to insist that the IRGC and its affiliated companies sell off all businesses that clash with the above vision? That would mean the transfer of ownership of hundreds of existing companies that are directly or indirectly owned by the IRGC network. Furthermore, the larger IRGC network goes far beyond the military organization and includes various foundations, cooperatives and entities owned by former IRGC commanders. It is obvious that these businesses cannot be easily redefined and restructured. The country’s private sector is mainly concerned about the unjust competitive advantages that the IRGC network enjoys in the Iranian market. The corps has easy access to funds (thanks to various banks and financial institutions owned by its network) and also political muscle that can secure projects and licenses that are not easily accessible to the genuine private sector.

Therefore, at best, the government can hope to achieve two objectives:

What Iran is witnessing today is very similar to the process that was initiated under the President Mohammad Khatami administration in the late 1990s. Back then, the Reformist government put pressure on the revolutionary foundations to become more transparent, pay taxes and also to stop competing with the private sector. The result was that the main foundations (the Mostazafan, Martyrs and 15 Khordad Foundations) obliged, but their interests were pushed into a host of smaller and less visible foundations, cooperatives and regional companies. The government could claim victory by pointing to the reforms that took place in the main foundations, but the private sector was left with the same degree of uncertainty in business competitiveness.

It can be expected that Rouhani’s initiative will go similarly. The more obvious IRGC companies (such as Khatam-ol-Anbia or the Bahman Group) will adjust their strategies and engage in large projects to assist the government. However, the wider network of IRGC-affiliated firms will continue operating in various business sectors. They may make their affiliations and ownership structures less transparent by selling some of the company shares to newly founded cooperatives and foundations, but their principal approach to the market would be the same. They would utilize their vast IRGC alumni network to secure projects, funds and human resources. The net effect on the Iranian private sector would be minimal as long as other structural reforms do not take place.